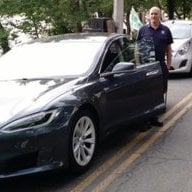 So normally in drive I don't want to see the sides of the car (instead I adjust to eliminate blind-spots) but in reverse I do want to see the sides of my car to make sure I see the clearance of the garage door opening. However the model 3 is brain-dead on this. It is only willing to distinguish the changes in up/down between forward and reverse (which hardly matters) and keeps identical in/out settings between the two.

Anybody else have this problem? I tried it a bunch of times, even made in/out only changes in reverse, hit "save" and there was no change at all when I shifted to drive. Haven't tried yet, but I think I need to make a special "reverse" driver profile; I hope at least that works.

Strange, this is the way it is intended! The owner's manual says:

Why would they intentionally restrict it to one axis? Plus it's the less important axis!
S

The single axis tilt on reverse is standard among almost all cars that have that feature. It's to allow you to see the curb position in relation to your back tires. Most people have their mirrors set the "wrong" way where they see the sides of their car, so that's the default.
S