I took car in yesterday to fix a small panel alignment issue that was documented during delivery. I had 28.2 FW already installed. To my surprise, they installed 28.5 update for me after they fixed panel alignment. I didn't get a chance to look at the release notes but guess it is probably nothing anyway.

Driving it this morning the only fix I noticed is on a nav bug. With the morning traffic, the nav on 28.2 sometimes kept recalculating the route 2-3 seconds after a route was just set. Restarting the screen did not fix it. With 28.5, I have not seen the same problem so far.
••• 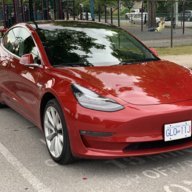 I was having the same problem when coming into town on the highway,. It was like it couldn’t decide what way to go., but when I got closer, it locked into a route. Please to see that this might have been fixed and wasn’t just in the Vancouver BC area. Fingers crossed to see if it is fixed in my area.
•••
J

I updated the model x software to 28.5. Allows 5 miles above speed limit when stop light control on. THANK YOU!

jcrish said:
I updated the model x software to 28.5. Allows 5 miles above speed limit when stop light control on. THANK YOU!
Click to expand...

Kudos for doing a forum search for "28.5" first! Slap on the virtual knuckles for not noticing the thread to be almost two years old.

Since he’s new to the forum, I’ll be nice and not present an award for reviving this old thread.
•••

If you drive an EV, you should also respect all forms of recycling. Even threads.
Reactions: comraddan, C141medic, qingshan and 1 other person
•••

How To Stop Software Update at “Install” Phase