Solar Energy just for Charging the MS and Roadster 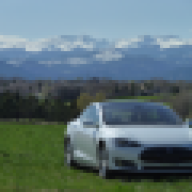 Purchase instead of lease.
•••
T

They're right. You wouldn't want to get enough panels for all the electrical needs of your house, but small projects like you're describing have much higher cost per kW.
•••
R

Just get ~5 kw system, which will max out one inverter I believe (vs 6 or 7 kw where you'd need 2 inverters). Purchase not lease. You can always add to system later if needed. Get 3 or more quotes. The company that installed mine has locations in NY/ NJ & CA if you want another contact pm me. You should be getting quotes +/- $4 per watt installed turnkey
•••

I organized a pilot effort for a system that would generate enough to power an MS 10k miles per year for $10,000 before incentives. It was a 2.5 kW system. 12 people installed. I'd still be doing it but my installer proved unreliable. Incentives vary by state but cost after incentives here around $4k. Break even can vary from 4 to 12 years depending on your supply rate and whether your state has SRECs. Pm me if you want further info.
•••

Electrons are fungible, and the panels would have to be grid-tied or something anyway, so it really doesn't make much sense to separate the system from the rest of the house. So don't think of it that way, and get the size of system that makes the most sense for your whole-house needs.
•••
B

I'm not ready to take the full solar plunge yet and thought that I would get my feet wet with what I thought would be a simple solar panel to home charging station. I guess I'm being too naive as I have no solar/electric knowledge?
•••
A

bart513 said:
I'm not ready to take the full solar plunge yet and thought that I would get my feet wet with what I thought would be a simple solar panel to home charging station. I guess I'm being too naive as I have no solar/electric knowledge?
Click to expand...

It's theoretically possible, but far from simple - and critically for your purposes there's no cheap way to do it.

The point here is that the output from the solar panels fluctuates from moment to moment (clouds etc), while the charger in the car expects a constant source of power. The car can be directed to change the current that it is drawing, but only with a minimum of 6A and with a response time of a few seconds. Also, standard (ie. cheap) solar inverters have a very simple control system - they take as much power as they can get out of the panels and pump it into the grid (with the current going up as the power increases), relying on the load on the grid at large to stop the voltage going up.

You could possibly make a special inverter that, on seeing a cloud, dropped the voltage while telling the car to reduce its current draw - but there's no guarantee you could make that reliable (and certainly nobody sells one).

You could buy an 'off grid' solar system with batteries in it, but that would be punishingly expensive and quite inefficient.

You could also (for Model S, not roadster) get a DC charging solution that could bypass the car's charger and charge the battery directly. I believe these do exist (for CHAdeMO, hence usable with Model S), but again expensive and only made in large sizes as they assume that the only reason you would want this is for high power.

Or you could do what most people do and connect your solar to the grid, and charge your car when the sun is shining - then most of the power is going direct from the panels to the car, but with the peaks and troughs rounded off for you by the grid.
•••
B

Thank you for the explanation. I think for now I'll just install a 2nd NEMA 14-50 outlet outside my garage. Only have a 1 car garage and the Roadster already claimed it
•••

Tesla Energy Apr 19, 2022
Steve2498
S
F
Could Tesla solar panels connections to grid and house have been mixed up?