Starting to regret my purchase

Electricfan said - "if you can wait a few years, maybe Tesla will get better, or VW or somebody else will have a quality vehicle out."

Total agreement.
I'm not sure I can wait "a few years" for Tesla to get better.
I looked at a comprehensive review of the VW ID.3. Very interesting!

Based on the review, there are many features to like. I like the looks; the size looks just about right; the interior appears to be roomy; the dash seems to be well designed; there will be three different battery packs (range) available; VW has a long history of designing and building quality vehicles.
••• 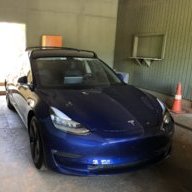 Sorry for your issues.

Lets hope your issues get worked out.

I can tell you that I have no real issues with my Model 3. I would say that I am disappointed in the legacy automakers not making a car that truly competes with the Tesla ECO system and forward thinking.

I would take the small problems OVER a less complete EV eco system. The Model 3 with Tesla Supercharger Network is a secret sauce, its FREEDOM. You have a hard time in a Bolt, Leaf, Niro, they FORCE you to use your smartphone to find the next DC fast charging since your phone will have the latest updated maps and the Mix of brands for FAST DC charging companies.
Reactions: jebinc and Petrocelli
•••
P

My Model 3 was just delivered this past Monday. I had to clean the interior because there was a blue adhesive-ish gunk on my center console and the plastic around it. The gunk on the plastic cleaned right off with some interior cleaner. The one on the console came off mostly but there it seems pretty permanent. I was going to take a tiny polisher to it but I already bought vinyl to wrap it so it didnt bother me. I cant say it was Tesla that messed up my interior, it couldve been Young Brothers who ships all Tesla vehicles from Oahu to all the other islands in Hawaii.

The plastic trim under the rocker panel is also wavy as *sugar*. It seems everything is connected to the body of the car but the trim itself doesnt stick flat if you stick your head to ground level and look, but a Tesla mobile guy is going to come by and take a look at it.

Still the most ridiculous car I've driven. I've never owned an expensive car before. I got a new 07 SI while in high school and it served me tremendously until this past year when a guy ran a red light and destroyed it. I live up halfway up the northern mountain on Maui and I can get from the main road to the road that branches to my place in 10 seconds going up a nasty hill. I love my Model 3 and its features, but I may have just been lucky with the few problems I've run into. Ive been biting my nails because of all the horror stories I've read about Model 3 problems, but so far, everything gucci. I've convinced my parents to get a Model Y a year or two after release. I dont want them to have to ship the car back to Oahu just to get it fixed. Or maybe Tesla will finally build the SC that they promised Maui. They said Maui would get a tiny SC after Maui has more than 200 Teslas, but they passed that number long ago. They ship like 8-10 a week to Maui.
Reactions: jebinc
•••

L
At Tesla Service Now: Should I replace this DD misaligned windshield?