As with Hawthorne, I think there is enough cause from Tesla's 2016 'future' supercharger map to speculate that Fallon will be getting one: 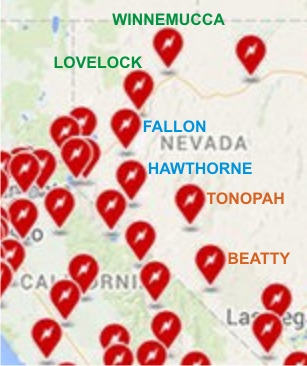 The ones labeled in green text are current superchargers. Of the orange ones, Tonopah is known but not yet in progress, and Beatty is basically finished but not yet live. That leaves two markers unaccounted for in western central Nevada, which I think will be in Fallon and Hawthorne. The Fallon vicinity has a little bit more development than Hawthorne, but not enough for there to be any other likely location in the area. Fallon is a good crossroads when going north from Vegas, from which you can go further north on US 95 towards I-80 and Lovelock, or southwest on US 50 to Carson City, or west on US 50, Alt 50 and I-80 to Reno. (or east on US 50, but that way be dragons, aka no SC). There are two more new markers on the map in far western Nevada, which I assume will be somewhere in the Reno and Carson City areas, but it's a lot more built-up over there so it's much more speculative to guess their whereabouts. I hope they can stay on schedule with these and it will open up western Nevada to easy travel between Las Vegas and Reno.
G

Do you know if this will also be the future route of I-11 (if I remember the name correctly)?

Yes, the proposed I-11 would go up this same US 95 route from Las Vegas to Reno.
G