First time I've seen a picture with a tent. Thanks for the update!

airj1012 said:
First time I've seen a picture with a tent. Thanks for the update!
Click to expand...

More great pics from jonjiv!
Thanks to him for continually monitoring the progress of construction @ Macedonia.

Tent is being used in order to create a semi-heated and dry environment for the masons building the surrounding masonry enclosure wall for the EVSEs.
Typically the EVSE are surrounded by wood fences with metal posts, which the working temperature is not as critical for their construction.
Local code officials or landlord might have required the Masonry wall enclosure in lieu of the more common wood slat construction,
Props to Contractors who are building anything outdoors in the North during the Winter cold and inclement weather.
Performing Work under such conditions has to be challenging, thus to keep somewhat of a schedule, they have responded with a tent canopy to allow the work to progress.
7

Some good news, they've been working on this site over the holidays. They've got 5/6 stalls covered with the Tesla-labeled shells as of today. My guess is another 10 days or so to complete this one. 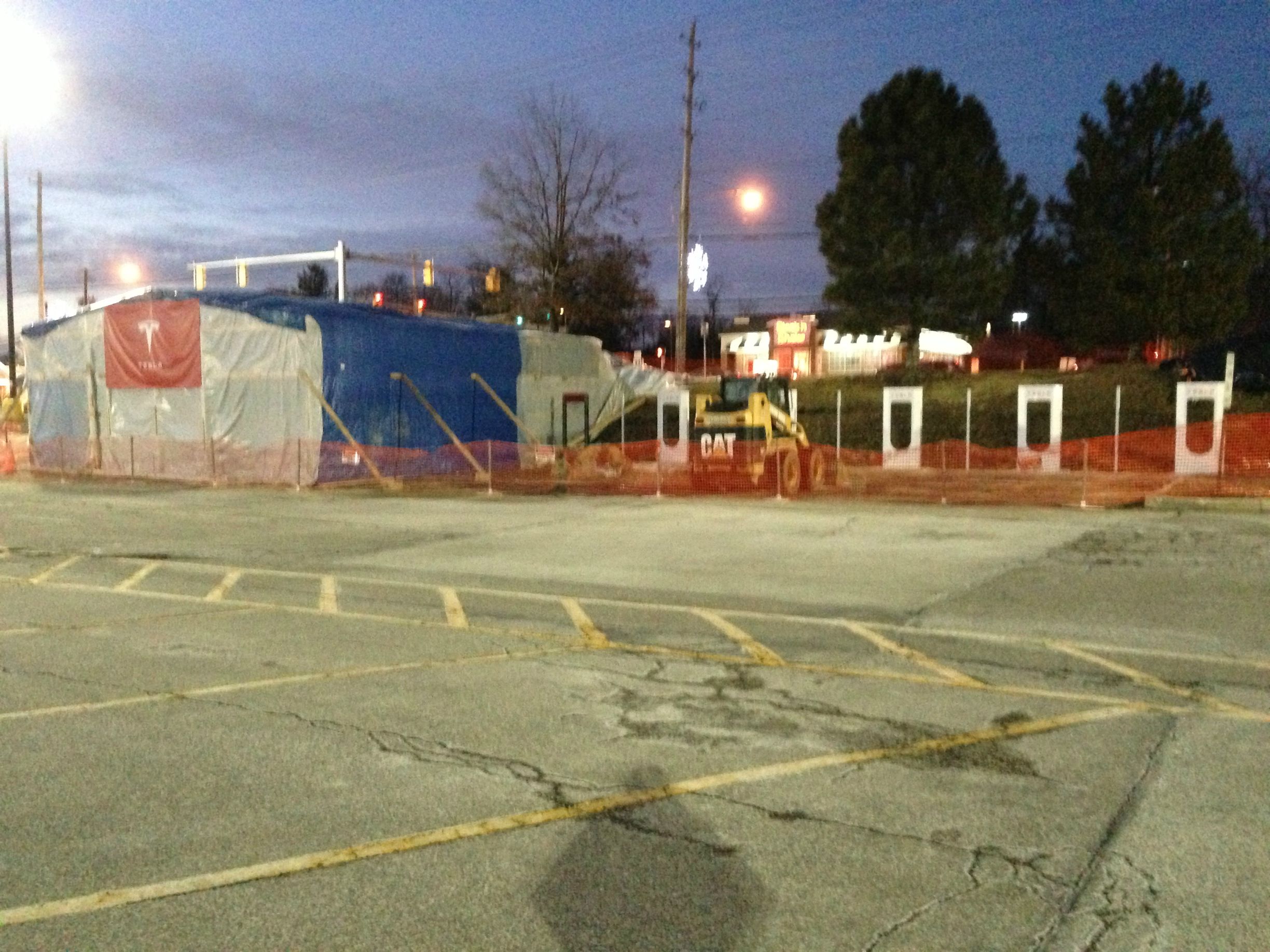 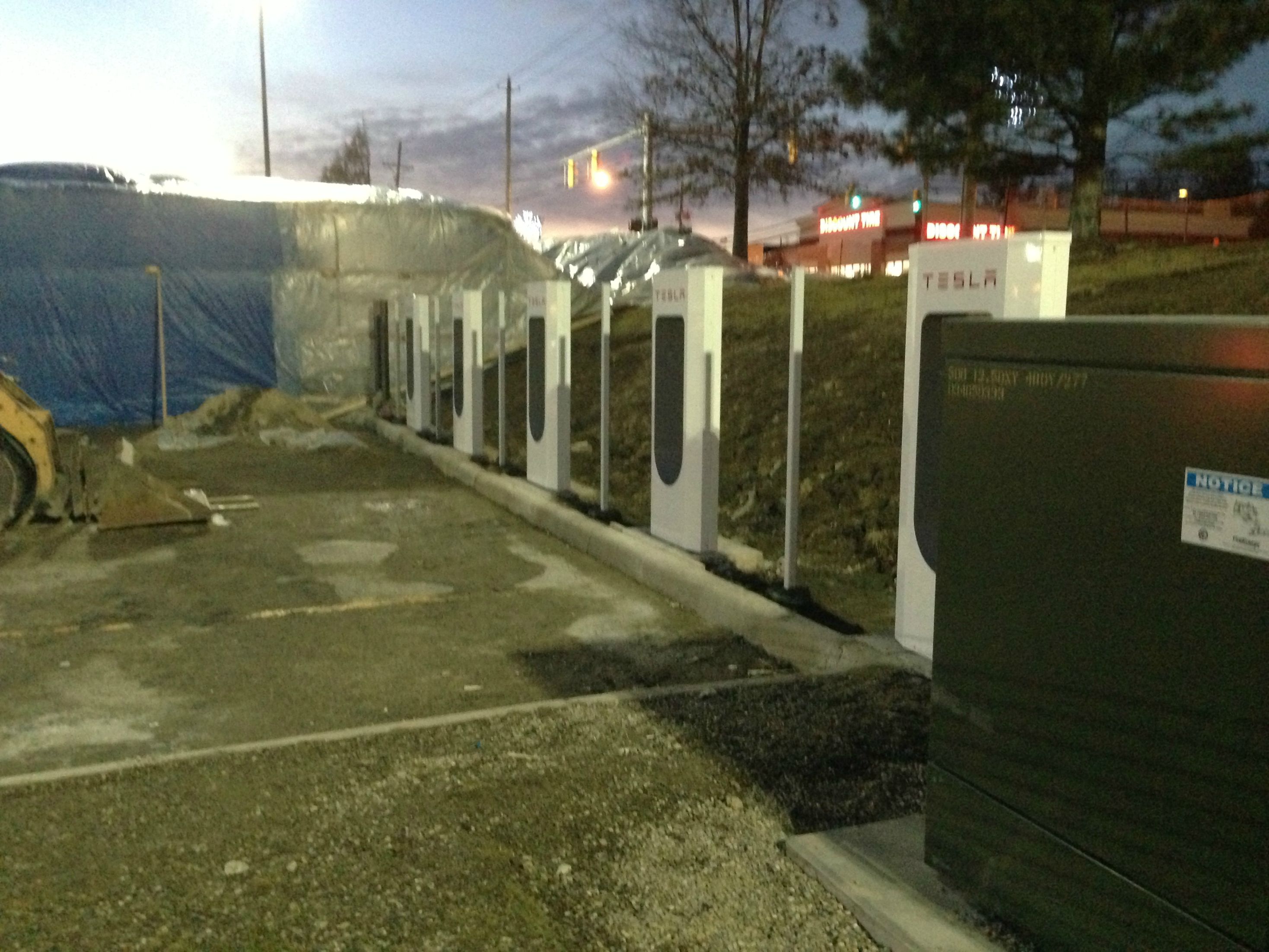 Also, the banner seems to be working... during my brief time there taking these shots, another car approached me and the driver started asking me about what these were :smile:
S

You beat me to it 772 haha. I was in Montrose today and could see the white superchargers from 271.

Do they have the cables pulled to the Supercharger bays?
I cannot (clearly) see in the photos if they are there.

Did either of you happen to peek inside the canopy and see if masonry is completed?
They had not set ESVEs previously. And that all has to be hooked up and powered. And inspected by local code inspector.

There still is a certain amount of landscaping/moving dirt around, possibly some re-striping of parking spaces also.
And disassembly of canopy and associated framing.

Almost nobody will be working NYE/NYD, so those "10 days" might become 10 working days.
7

Yes, I did mean about 10 working days (so more than 2 weeks, sadly). As far as I could tell, they did not pull the cables yet. I did not look inside the tent but jonjiv's last photo shows at least some good progress. I agree it does need some landscaping but I don't know how much they will do here in the dead of winter. Perhaps they might lay some grass seed, I'm not really sure. Parking spots also need repainting.
J

Nothing has changed since 772's visit but I took a couple more photos including inside the tent. The brick structure housing the chargers seems almost complete. The cables don't appear to be pulled.

I also had a guy pull up and ask what it was. I explained to him that they were high powered chargers for Tesla vehicles that are being built 150 miles apart across the country. He said it "sounds like the future."

5 of the 6 bays have housings on them.

One of the bays straight on. No charging cable installed yet.

The unhoused bay, and a housed one. 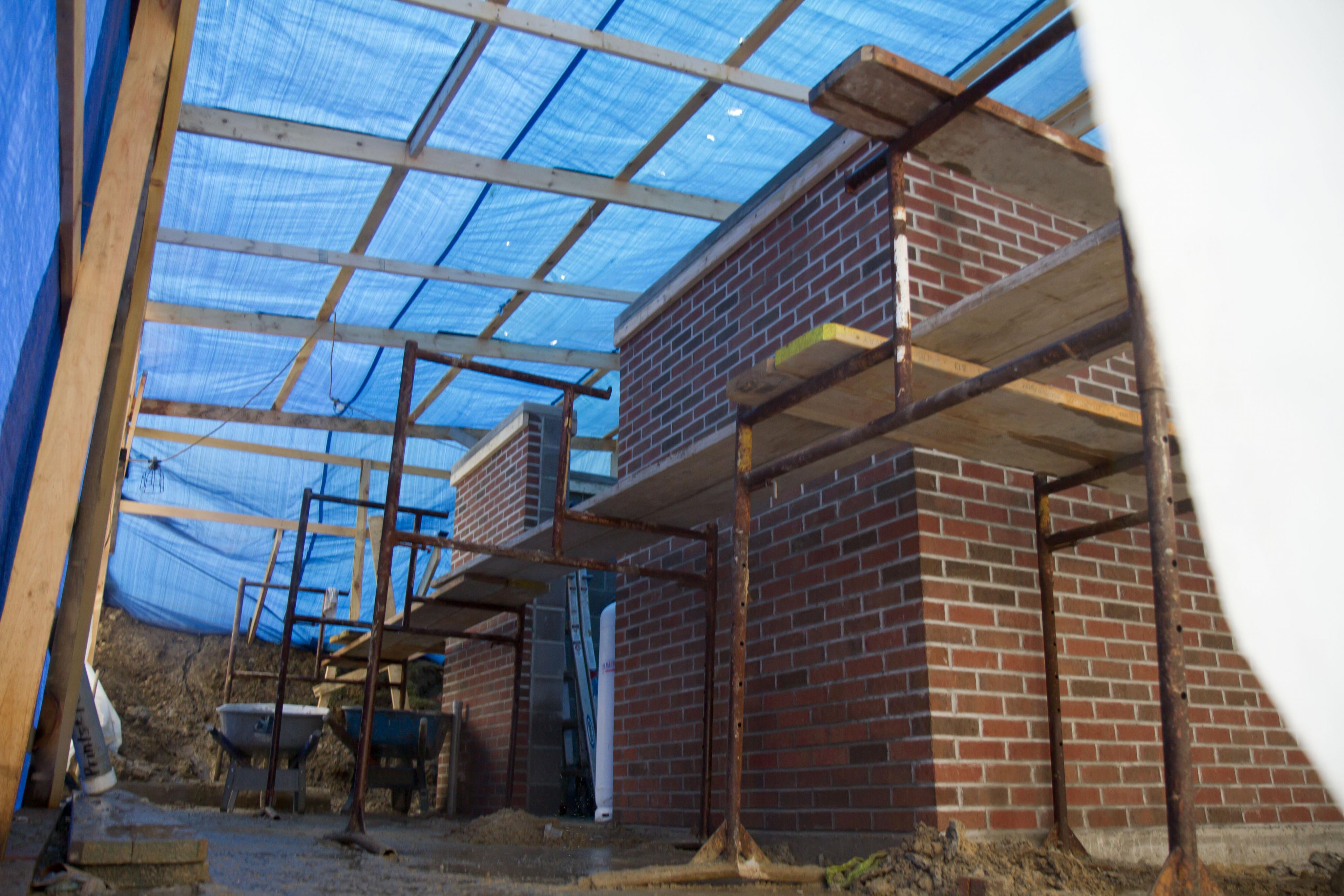 Spy shot inside the tent. They closed up the eye level hole I had been using, but there still was a hole in the tarp near the bottom. I didn't mind because it was actually a better angle of what's inside, haha.
7

Great shots, jonjiv. It looks like the masonry is more or less done and the supercharging hardware is inside already. They just have to wire them up.

772 said:
Great shots, jonjiv. It looks like the masonry is more or less done and the supercharging hardware is inside already. They just have to wire them up.
Click to expand...

If the masonry is just wrapping up, the scaffolding will have to be moved out of the way, then they can start pulling cables and setting ESVEs.
The round tank inside the wall area is probably some sort of fuel (propane) for heaters inside the canopy/tent to allow the mortar to properly cure with such cold and damp weather conditions.
Concrete formwork still needs to be stripped from the concrete pads.
Most of the bigger stuff is well underway, many tasks yet to be fulfilled.
S

Added the information on PlugShare. If anyone would like to upload their personal photos, go right ahead. I had to mark it as a "Quick Charge" station because it doesn't look like I can classify it as a "Supercharger" without the help of a moderator.
A

Any updates on this location?
S

airj1012 said:
Any updates on this location?
Click to expand...

I'll be stopping by Friday and will take pictures.
7

airj1012 said:
Any updates on this location?
Click to expand...

Stopped by Macedonia today. There were two guys working very hard. I believe they were pulling cables to the charging bays today. They took off the white covers to attach the cables and connect the charging connectors. They had 2 of 6 stalls completely ready to go as of 11 AM today. Looks like only site cleanup, sign attachments, line painting, and final inspections are all that's left. Also, the Tesla banner was still hanging on the masonry surrounding the supercharger units, on the side facing the road.

I didn't have time to talk to the workers today so 772 if you stop by again, perhaps you could talk to them and get a more precise ETA on completion.

Here are a few quick pictures: 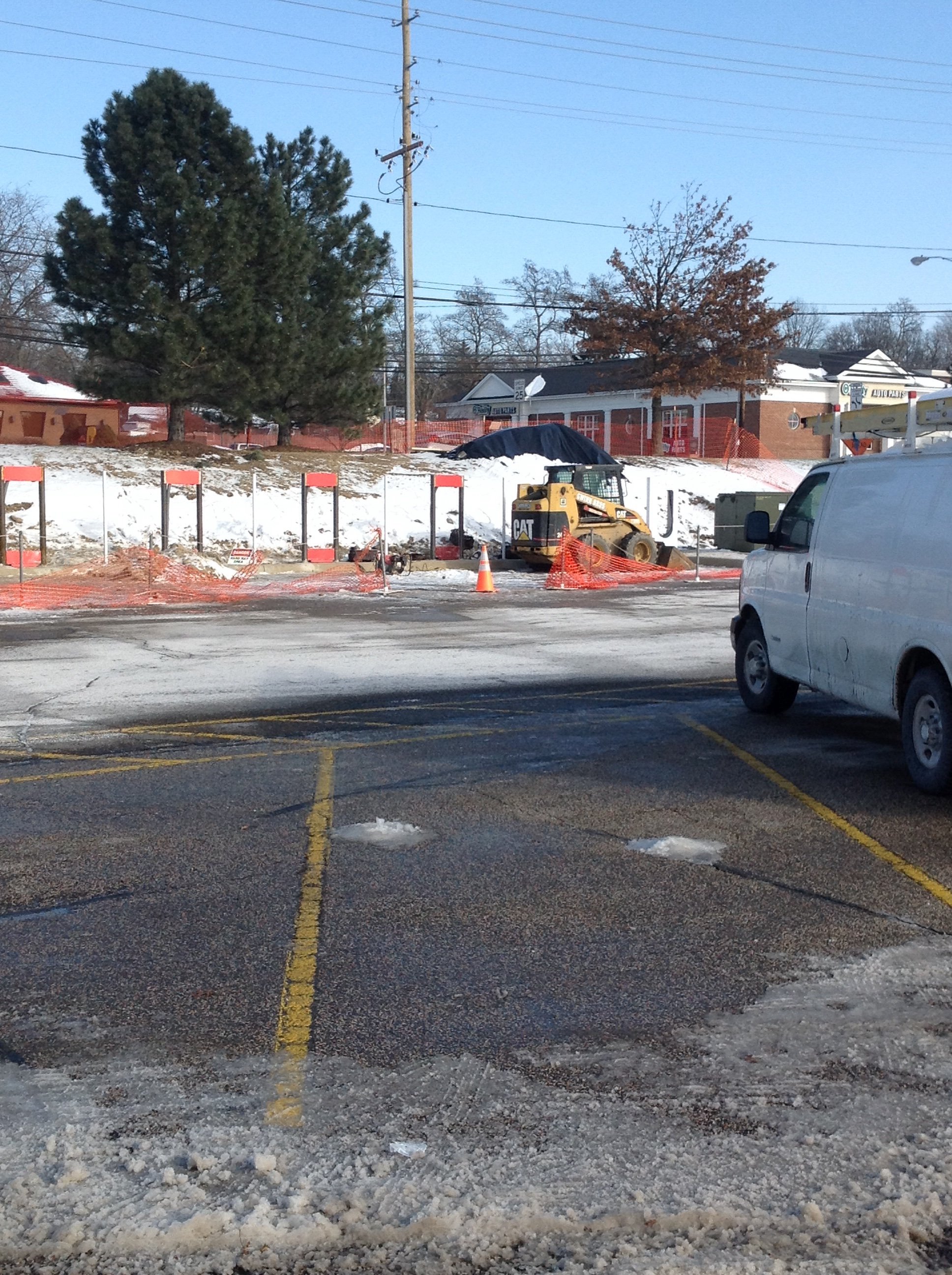 They look so... naked and defenseless without their covers. And cold, very cold.
S

Just stopped by Macedonia five minutes ago (currently typing this from the McDonalds near the supercharger. Looks ready to flip on! The construction fencing and the porta-John are still there, but everything looks good to go. Even the electrical meter was installed, but showed nothing on the screen. Perhaps tomorrow it will be all flipped on, or maybe even tonight. No one was there working when I was there. I'll update with more pictures in a couple hours when I get home. 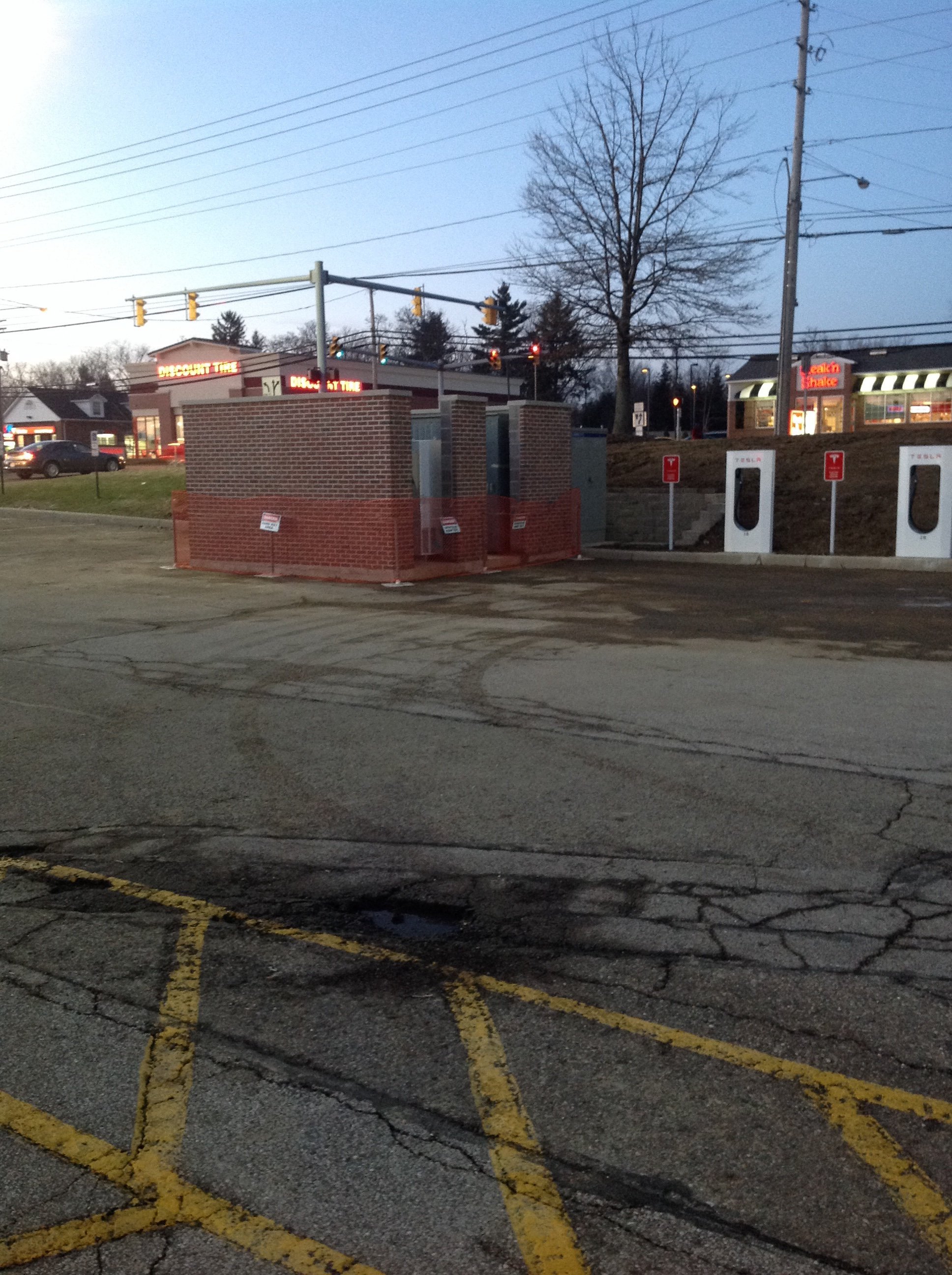 Thanks Sgt Barone. They still have some landscaping and I assume also some re-striping of the parking spaces, but that may still be done after the SC is energized.
S

Here's a few more pics of Macedonia from today, including the power meter. 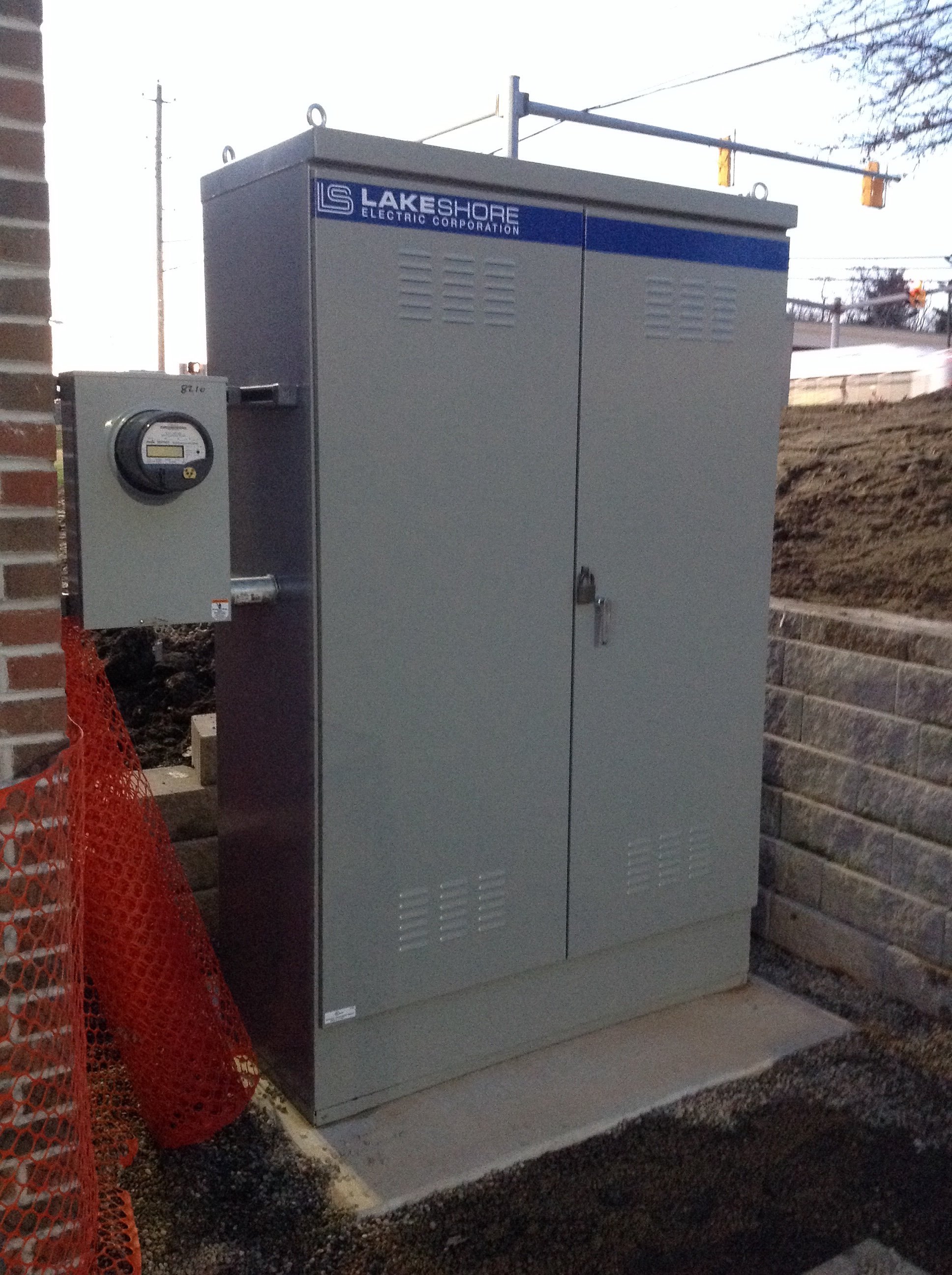 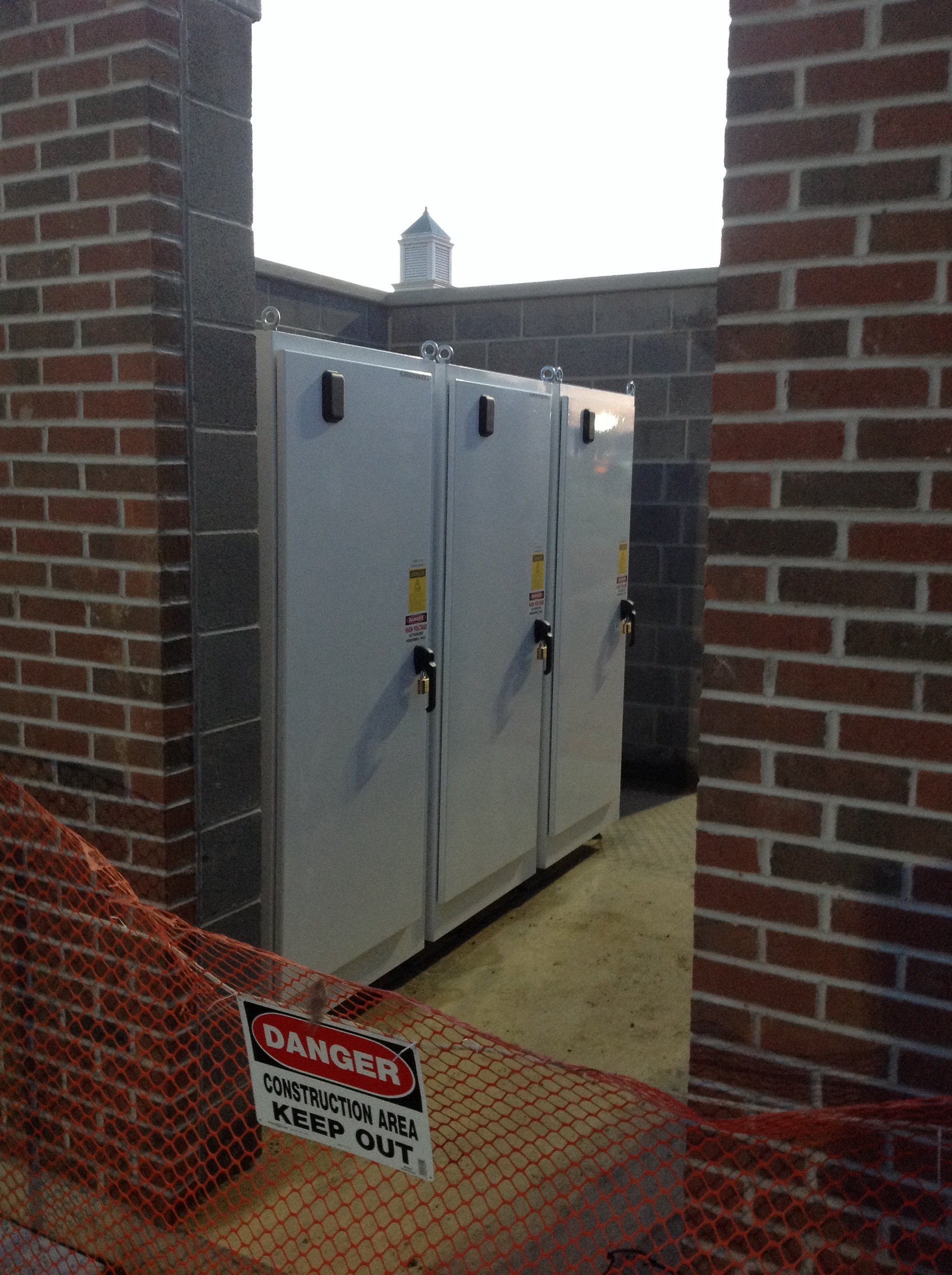 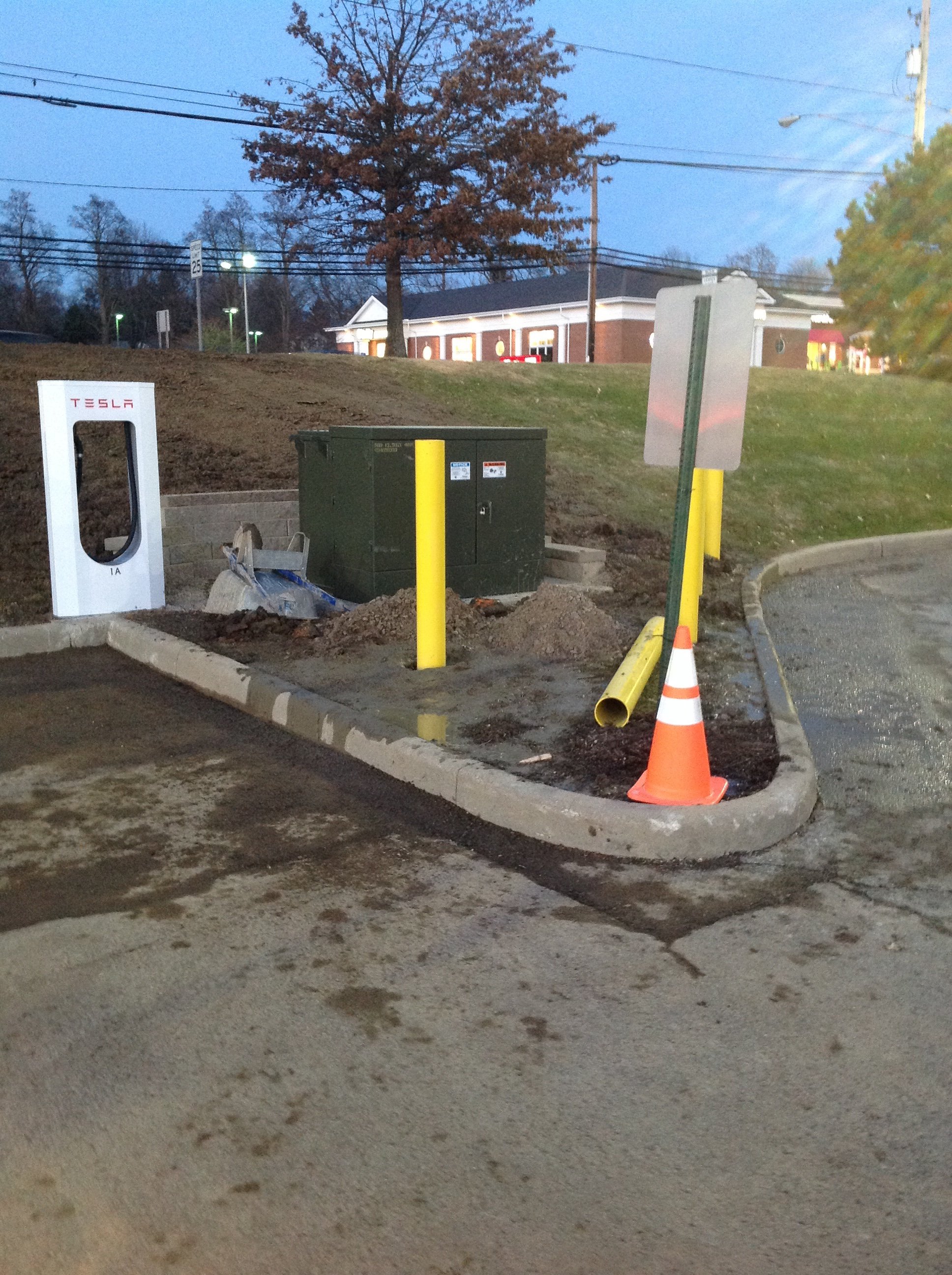 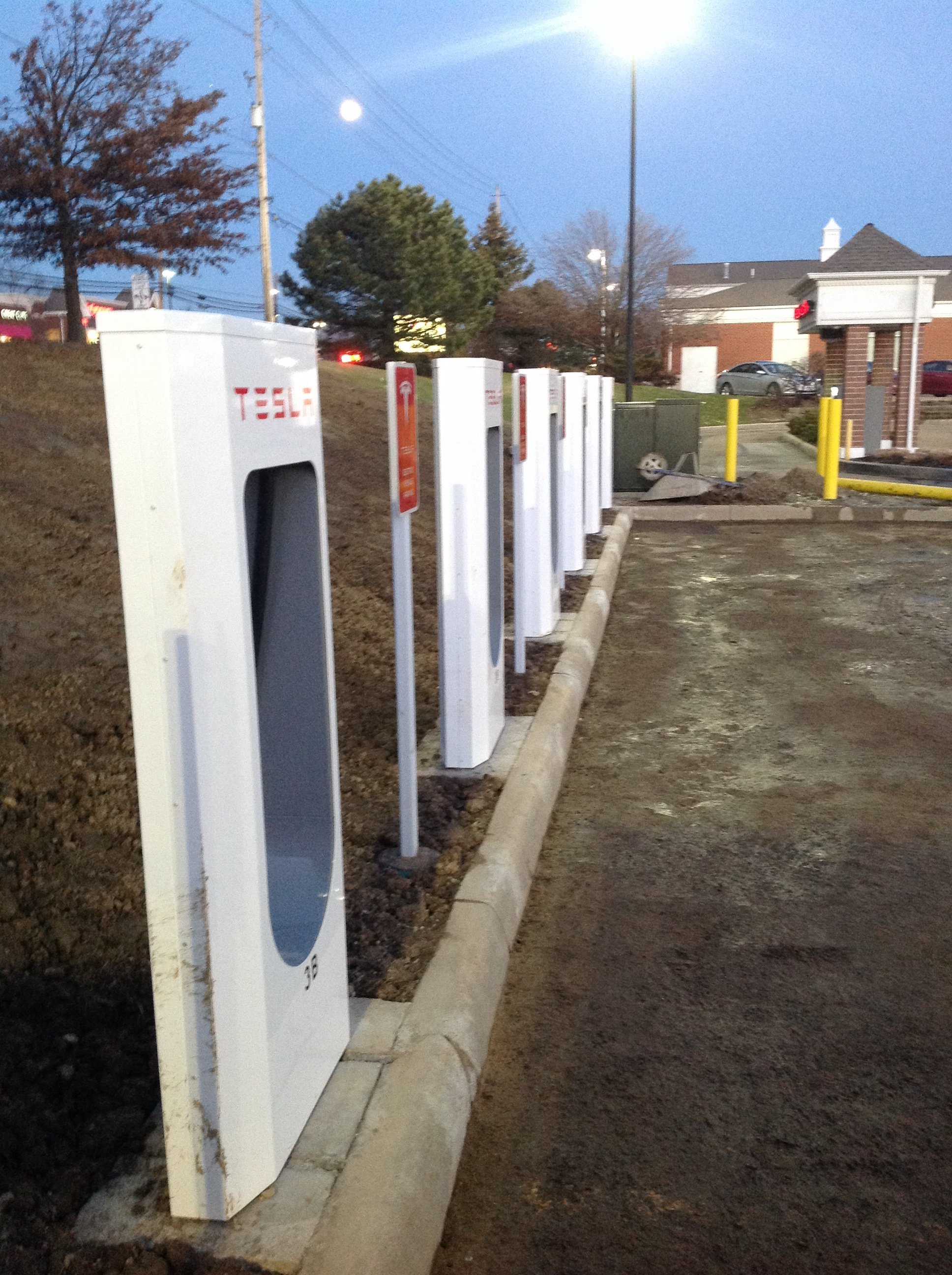 The charge is working? Still not live on the site, not sure about the in car nav.

Supercharger - Several coming to CT in 2021