Still new-to-me, late 2014 AP1 with about 107k miles now. I was experiencing clunking at low speeds (not related to turning) and did some research and figured replacing the Front Swap Bar Links would be good investment. It definitely appears to be and honestly, I think it probably should probably part of a regular maintenance cycle given cost, effort, etc.

Both of them were pretty much goners. The top part (with the band) was completely separated and it moved very, very easily. We're talking, like, no resistance easily. The new ones don't move that end at all, I don't believe.

The process is very painless and the cost is cheap. My local (Marietta, GA) SC even shipped them to me which was a big help. They had one of the two in stock and ordered the other. Each one was only $47 each. I had forgotten to get replacement nuts, but I think they are like 25 cents each or something like that.

Installation is super easy that did require me to get a few things however.

1) I needed to get a 2nd SafeJack as both ends of the car need to be lifted to equalize weight. It's a good investment, however, and gives me more options in the future.

2) I bought a cheap $1.99 5mm Allen wrench (https://www.amazon.com/gp/product/B000GAOAFK) because my folding set didn't have enough room to fit for the lower bolt. Cheaper and smaller is better here

3) Although I had many sizes of metric wrenches, the size is a somewhat unusual 15mm. Since I needed to buy one, I sucked it up and paid a bit more for a flexible head one. I'm sure I would've been fine without it, but it definitely was nice and gives you extra space to maneuver and get it loosened and tightened. I've had good luck with the Tekton brand and at $16, it wasn't awful (https://www.amazon.com/gp/product/B01F5124XE) although I still hate spending that much LOL.

Beyond buying the parts, it's pretty much little more effort than rotating your tires. Once the front end is lifted and wheels are removed, you just put the socket on and put the Allen key in and remove the washers, pull the old part off, put the new part on and screw it tight. The process makes changing your brake pads look like rocket science.

The funny (and somewhat irritating/disappointing) thing is that the previous owner (I've only had the car a couple of months) paid $$$ for the maintenance plan and had just completed a service where they flushed the sunroof (I know it's a thing, but still sounds like changing turn signal fluid LOL) and such, but they didn't do any of the critical things. They obviously didn't clean and re-grease the brake pads and the rotors had become warped and I'm sure the previous owner would've gladly paid $100 to have the suspension noise fixed. Oh well, their loss - I got a fantastic deal on the car and I'm sure these things were "red flags" for customers at a higher price point.

Anyway, it's well worth doing these as they appear to be common wear items due to the weight of the vehicle. Even if they are fine currently, it's really a no brainer for the cost and effort. I will probably order another set to have on hand in maybe 60k or so.

Oh, and interestingly, my old ones had unprotected back (looks like maybe there was something there that had fallen off) while the new ones were protected. I'm in the southeast, so rust is not a concern, but that this experienced numerous salty winters it might have looked pretty rusty. 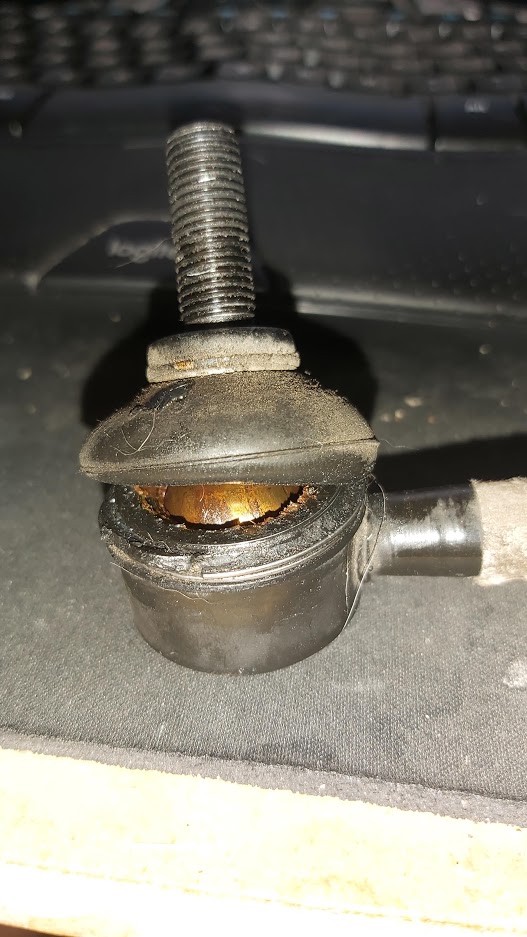 Reactions: mambro, DrHoon and All In
D

Did this affect alignment?
K

Wratran said:
Did this affect alignment?
Click to expand...

I doubt it. The part is semi adjustable and just connects the sway bar.
D

Any chance you still have the old ones and want to measure the distance between the balls (center to center) and the stud size? I'm having similar issues (2015 85D, 113k) and my local stores have universal links in a variety of lengths.

Also, could you tell that they were loose when you had the car jacked up? I had the front of mine jacked up and on stands a few days ago and just grabbing the links and trying to move them I couldn't feel any play.