Temporary, non-destructive, $8 fix for back up camera issue (~2 hours work)

Hey everyone, here is my write up on a temp fix for the back up camera if you think it’s because of the coaxial cable losing connection due to crimping of the cable from opening and closing the trunk as opposed to just a SW bug. This fix is completely reversible when the time comes for Tesla to implement their recall fix, whenever that may be. Because this fix is plug and play and is non-destructive, they can’t deny performing the recall fix because you modified something. And at this rate, with their “don’t call us, we’ll call you” attitude, I’ll probably take delivery of a Cybertruck before they actually fix this.

For me, and more importantly my wife, a backup camera is a must. Yes, I know, you can do an over the shoulder check, but the trunk on this car sits so high up, there is no way you would see a toddler or a kid’s bike out the rear window. Anyways, the reason why you may want a working rearview camera doesn’t matter. If you want to a temp fix here is mine.

At a high level, my workaround is to disconnect Tesla’s coaxial cable from the backup camera to the downstream wiring harness and connect a new one in between, but leave it hanging down in the trunk and not have it go through the rubber tubing that is getting crimped by the trunk closure.

The cost is $8 for a cable from Amazon and about ~2 hours of labor which is almost all spent on trying to remove interior panels.

First some details on my experience:
At first I assumed it was a SW bug, but my theory is that it’s a combination of the repeated crimping of the backup camera cable from opening and closing the trunk causing signal degradation and somewhat of a SW bug/feature. There were times when TeslaCam would record the backup camera view, but I got a black screen for rear camera view on the center console screen. That made me think it was purely a SW bug. But looking back, my thinking is that the displaying on the center screen requires a full hard reset sequence or deep sleep once the signal is reestablished, whereas the TeslaCam can pick up the feed when the signal is reestablished without a hard reset. Or from a SW point of view, Teslacam requires a less laborious SW sequence vs displaying on the center screen.

What finally convinced me that this was indeed caused by the cable crimp issue and not so much a SW issue was when I did a hard reset sequence, with the trunk open, and the rear view was working on the center screen. Then I slowly closed the trunk while watching the rearview display and I could see it cut out. This was repeatable multiple times at about the same angle of trunk closing. It was only about 3-4 degrees of closing – so barely closing the trunk at all.

Onwards to the temp fix. The hardest, most time-consuming part of this process is trying to remove the rear passenger side trim. That took me about 2 hours the first time to take it apart and put it back together. The cable connection itself takes about 5 minutes.

First, the part you need:

*Note, I believe the Tesla Connectors for their cable are FAKRA type D. But FAKRA type Z is a universal connector and supposedly fits all FAKRA types. The one I linked to above fit perfectly.

Power down the car. This helps with two things:
Follow the instructions here to power down, but please take note of leaving the frunk, doors, and trunk open the entire time – THIS CAN NOT BE STRESSED ENOUGH:

Have you ever had your radio stop working all day? Rearview camera only shows black? Performing a soft reset holding down the steering wheel buttons can’t always fix your problems. This guide will show you how to perform a hard reset on your Model 3 in a matter of minutes, and using only one...

Next pop off the tesla trunk liftgate cover: Follow this video starting at 2:31


Now you can see the connection to the rear camera: 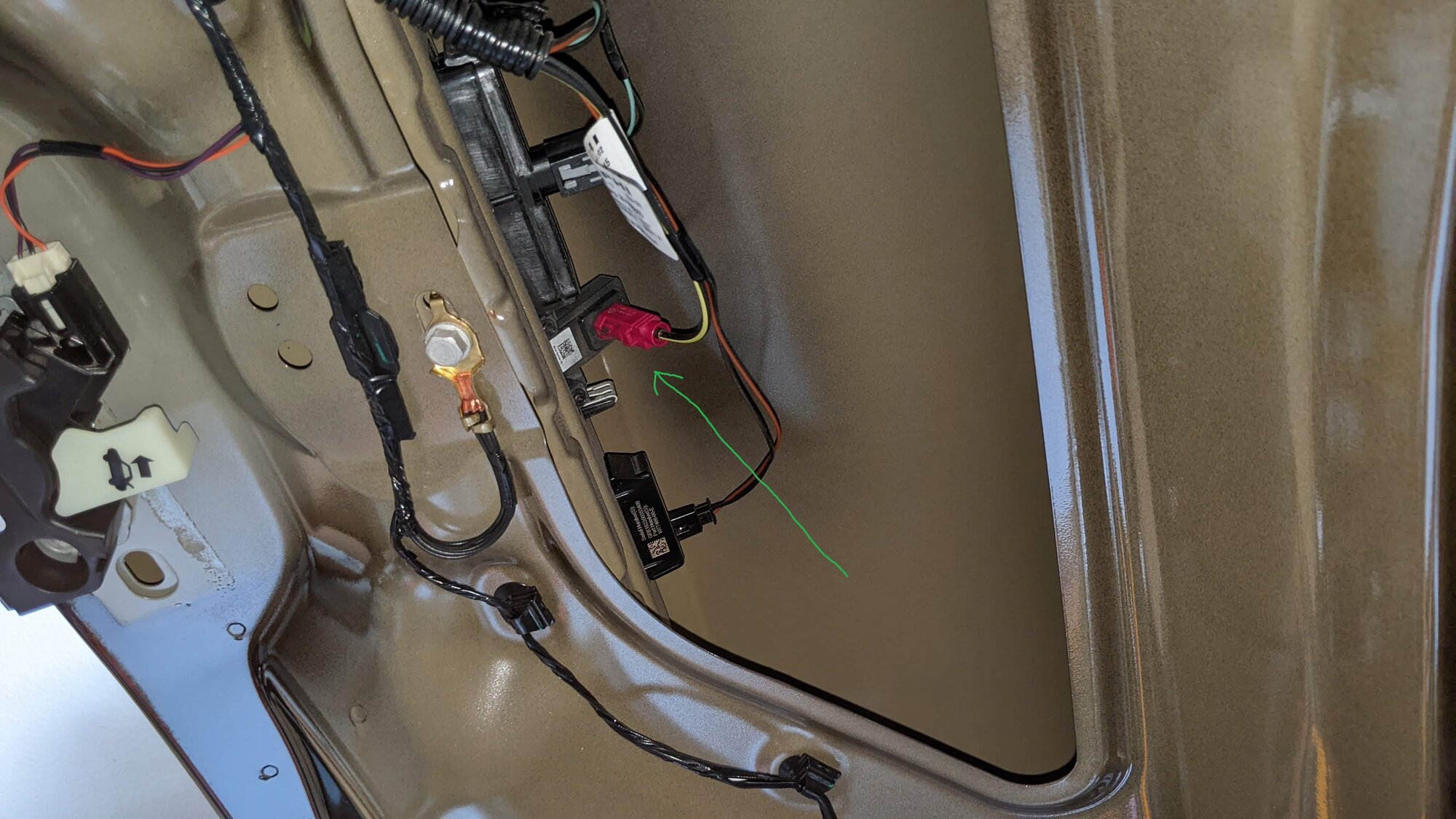 Go ahead and disconnect that cable

Next is the tedious part. Removing the rear passenger side seat and overhead doorway trim.

You don’t actually have to remove the whole rear deck panel. I only removed the rear passenger side, the side seat trim, overhead door sill trim, and the roof trim that slants down the back window. That allowed me to lift the rear deck panel enough to squeeze my hand underneath to disconnect the coaxial cable connection as seen here: 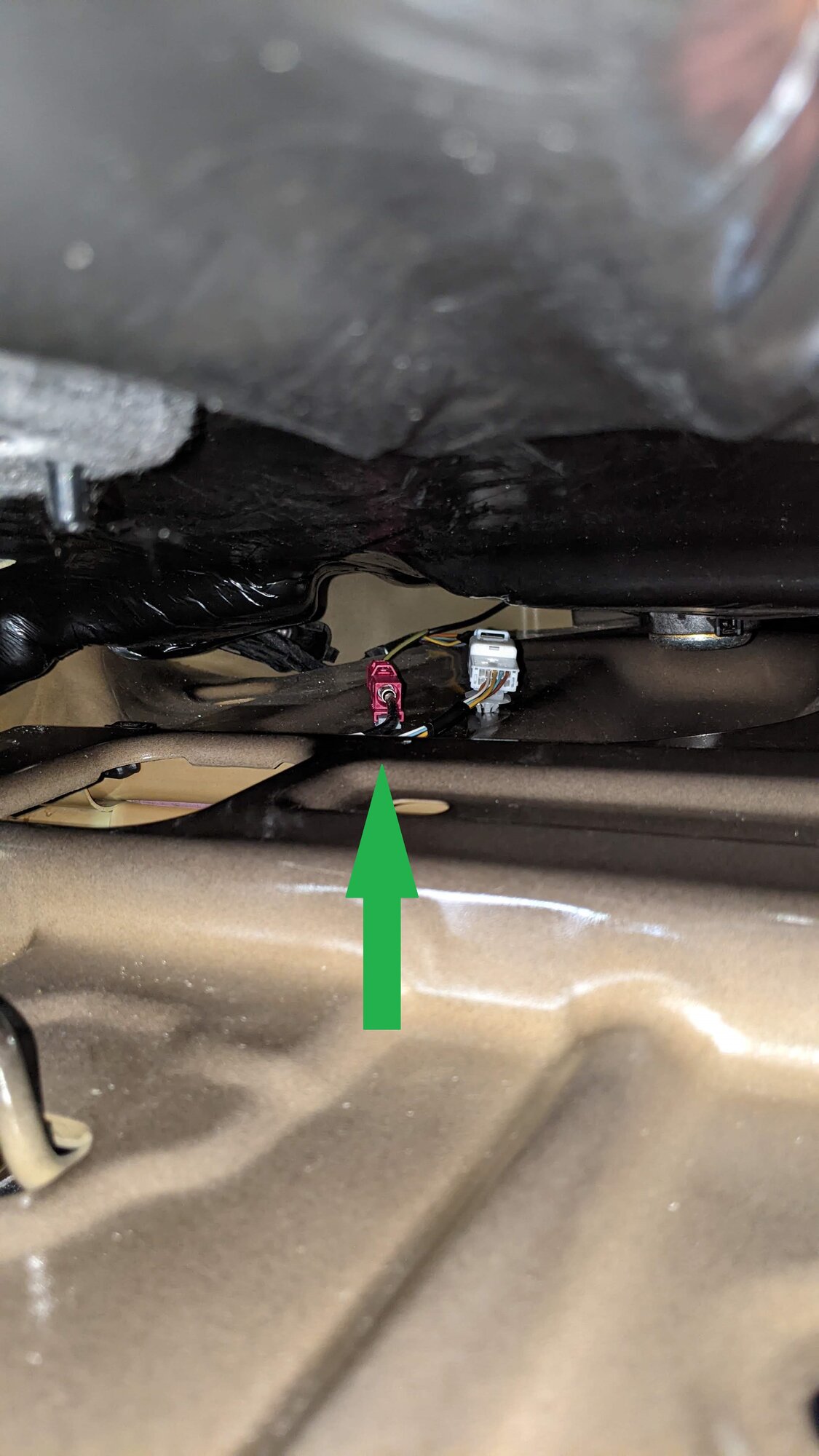 I couldn’t really find any good videos with much detail on removing the rear door sill trim. Just know that you need to be able to lift up the passenger side of the rear deck cover, which is the pretty carpet like panel just below the rear window. If you search up “Tesla 3 rear deck lid removal”, you might find some videos on it. Here is one example:


Once you disconnect Tesla’s coaxial cable, you just plug in your new one. For me, I took off one of the grab handles on the trunk liftgate cover and ran the cable through there, then up and into the underside of the rear deck. I added some plastic loom to cover the cable and I just taped it down with some painter’s tape. I plan on getting some gaffers tape as the painter’s tape doesn’t stick too well to the trunk liftgate cover. 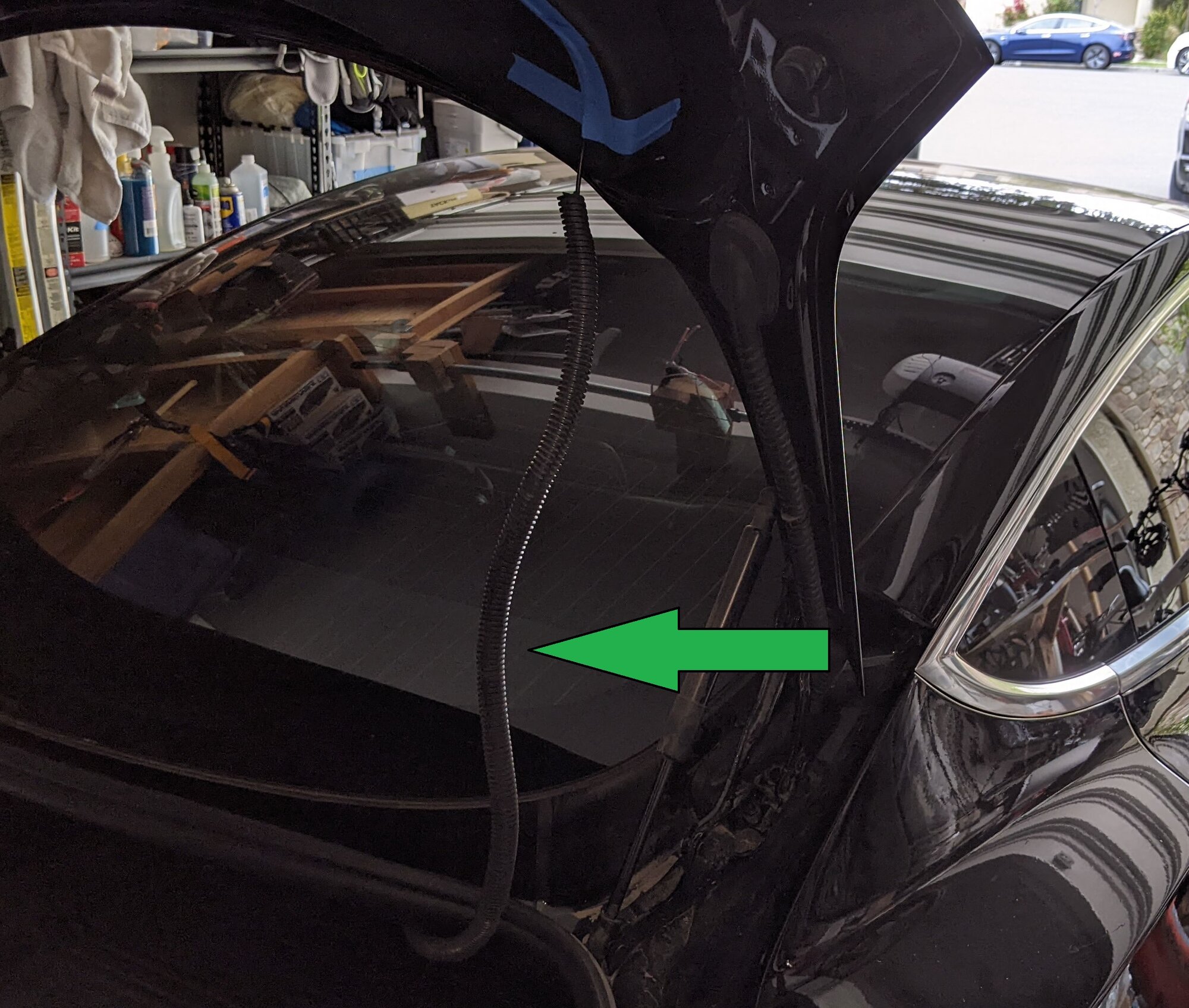 Once you make the connection power back on your car, check the rear view display works, and put everything back together.

Well, I hope this helps someone who is tired of waiting for Tesla to address this issue.
Reactions: lemketron, android04, mswlogo and 1 other person
•••
B

THANK YOU so much for your instructive content and video. This is a lot to digest, but definitely worth a try. I appreciate all the details you provided, and the step by step videos. Seeing is believing. And I truly miss my functioning back up camera.

Funny you should use the phrase, "Don't call us; we'll call you," when describing Tesla's cavalier disregard for their customers. I've said that many times about Tesla. However, your video and instructive content is amazing. At least ONE person out there - YOU - are servicing Tesla's thousands of abandoned owners when Tesla can't be bothered. Thanks for all the work you put into helping us.
•••
E

Hey BMacK, thanks for taking the time to post a response so I know at least I helped someone.

Yeah, there's a lot of info there. From a high level, the steps are just removing the trunk cover panel, the rear deck panel, and replacing the cable.

I should also mention that anytime you remove panels from a car, there's a good chance that some clips will break. It's mentioned in the videos and it sounds like they are available for purchase.

Good luck. So far, my rear camera has worked 100% of the time since the fix, through many open and closings of the trunk.
•••
B

Boy, I'm impressed. If this site had a private DM messaging system, I'd get your address and send you $$ for your time and effort. (Does it?) No one else has helped ... not Tesla, not private repair shops, and I really miss my back up camera. I just ordered the parts (coaxial cable and gaffers tape), and am going to give this a roll. Wish me luck. Good to know that your fix is still 100% for you. Thanks again. You've seriously restored my faith in people.
Reactions: lemketron
•••
E

No need for any compensation. Just glad it's helpful to somebody. Take your time. All the work is in getting those panels off.

The gaffers tape works better than the blue painters tape, but it still comes off eventually. I think the heat in the truck along with the bumpy surface of that trunk panel causes the tape to fall of eventually. Or maybe I need better quality gaffer's tape. But it's such a minor thing compared to having a working backup camera.
•••
M

Wow, nice job. I wish you owned a Model S Refresh so you could investigate future glitch’s on Model S
•••
B

Right, MSWlogo?! This guy is amazing.

Australia Monday at 3:32 AM
Flatbat