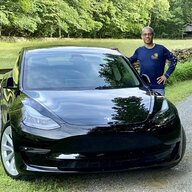 It seems to me that there are several "modes" or levels of sleep or "off-ness" on this car, but I'm not sure how to distinguish them or what's going on in each. For example, after I drive my 2016 MS75D and put it in "Park," I can walk away from the car, and--comparing the Tesla to an ICE vehicle--it's "off."

But, then, there are times I get into the car, the dash/ICU display says "Car Off." What's the significance of that mode?

Lastly, there are times I get into the car, the ICU display is completely black, and after I put my foot on the brake and enter my drive PIN code, after about five seconds, a white Tesla "T" symbol appears on the dash; maybe five seconds later, the car seems to "wake up." What's the significance of that mode? Are there any other sleep modes I'm missing?

FWIW, I'm asking in part because I'm using the Remote for Tesla app and having a bit of difficulty getting the car to "wake up" and respond to commands (yes, I know there's a support thread on the Tesla forum, but this is a better forum to ask questions like the above, I think).

Thanks for your insights!

I too have problems waking the car up thru the app, but I can walk outside, and everything wakes up fine as expected, including approaching car. I think this is a problem of the app, not the car.