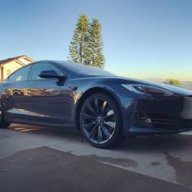 djayz said:
Can some please addres a couple of concerns I have before I jump in?

-does this potentially affect our Tesla warranty? Tesla aren’t often the best when it comes to addressing warranty issues with sometimes looking to blame the customer so I fear this might give them a way out?

-is this technically an insurance/roadworthy risk given frunks have always required manual release mechanisms to avoid risk of hood opening during travel?

-does the Tesla offer one also CLOSE from the touchscreen AND the app? I have seen the Hanshow one and that doesn’t appear to close form the screen
Click to expand...

I have the Hansshow power frunk, and you can close it from the screen.
•••
2

Lear45 said:
Installed the frunk kit today on a 2021. Few differences from install video...as the box is installed a little different and the latch bolts were tougher to get to...but overall not too bad. Spent more time figuring out where to put wires and control box...but very happy with everything.
After it was all installed, the soft close function wouldn’t work...had to manually close. Feeling frustrated I reached out to Raymond and he responded within a couple hours on WhatsApp saying to double click the button on the control box...as it resets the latch wire. Solved the problem and all is well. Soft-close doors are next.
Click to expand...

went through same issues.
Also, couple of other notes here for those who self install
- Be VERY slow and steady when connecting the plugs that are on the ends of the wires of the struts. High chance of the pins inside bending downward slightly, just enough to not go into their openings on the mate plug. Small screwdriver or pick can bend them back up if needed.
- The plug that connects into the control box has a purple cover on it. If you have to remove that plug from the control box at anytime, chance that the purple cover sticks inside of the control box opening, making reinsertion of the plug almost impossible. Use a pick to easily pull the purple cover out, reinstall it on the plug, then reinsert.

Another friend mentioned exact same real world experience to me.

So, im passing on the soft close but still interested in how your install goes.
Reactions: random155
•••
T

I always seem to miss out on these group buys. Gotta check the forum more often...
•••
P

Send me a private message with your email if you are interested in getting in this group buy. The team at Tesla Offer has graciously offered 20% off if we get 25 orders. This is good for electric tailgate, electric frunk, soft closing doors or auto present door handles.
•••