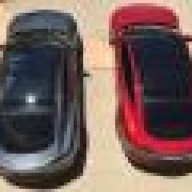 For those more proficient at sorting the effects of a slight downhill than me, this is same section or road wherein my car ran 0-100mph in 7.3 seconds, having just now run 7.5 seconds on a perfectly flat road. I suspect that with aerodynamic drag being the main impediment to acceleration at these higher velocities, I would surmise (perhaps incorrectly) that the grade has less of an influence on a 60-130 mph run than it would on a 0-100 mph runs, but I'll let those who are more knowledgeable than me provide edification on the matter. This run immediately followed a 1/4 mile run, and a 0-100 mph run, and I believe that the car dropped from "Ready" to "Preparing" in the midst of the run, though I admit that my vision was rather intently focused on the road, so I can't say for certain if this drop occurred in the midst of the run or as I begean decelerating.

There simply aren't any flat roads in my immediate area that are safe for a 60-130 mph run, so I apologize for the inexactness that my data points. But I figure that some data is better than no data!
Last edited: Oct 12, 2015
•••
A