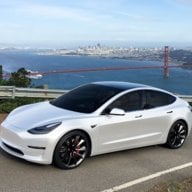 I can't remember all the many times the various forums have had both Tesla owners and BMW owners/visitors both arguing that the BMW M3 would 'easily' beat the Model 3 DMP around the track. We've seen suggestions on Fastest Laps (not a highly reliable source) and more meaningfully in Randy Pobst's recent times on Streets of Willow that this might not be true, and then there was the Chinese video where it wasn't even close, but where very few could understand their narrative, and where the times for the M3 were almost unbelievably bad. Now comes Top Gear, and, once again, it's not even that close.

What I found interesting is 1) that the only point out of four won by the BMW was based on something totally subjective, 2) that there is a mention of pending modifications to track mode they called 'sliders' which would allow variable torque allocation front and rear, and perhaps making staggered tires advantageous?

Has anyone else heard of anything like this, because this seems real news to me, and a bit sketchy from a physics standpoint. And couldn't this only mean dialing back torque at the front? How could you truly divide torque up outside of the output limits of the two motors? Or am I missing something? Has anyone else heard about sliders?
•••

Top Gear Magazine: Model 3 Performance is faster around a track than the BMW M3!