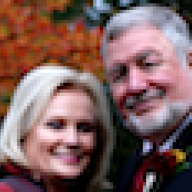 So - the good news - I just bought a 15' Boston Whaler SuperSport bay boat (See Photo). The interesting news is I picked it up in Fort Lauderdale, FL area to trailered it back home to Fort Worth, Tx - 1343 miles total (See attached ABRP chart for trip down to pick-up). First time long distance trailering with my 2018 MX 100D. Thought I would write up about my trip experience.

Facts - Boat - Open with center console, motor attached. Weight for Boat, Motor, Trailer, & Misc was approximately ~ 1700 Lbs. The boat did NOT have a cover, which I think is an important point. I also folded the Bimini top down so it was flat at the stern of the boat.

The principle point of this is the significant reduction in mileage, approximately 2x. I am fairly conservative when riding (aka Range Wimp) so I strive for 20% margin, am OK with 15%, and quite nervous with 10%. Especially with a large unknown of the effects of trailer to mileage. I typically like to run 85% down to 20%. For this trip I had to significantly expand that to 95% to 10% (even to 5%). Table with stops from ABRP (Without trailer effects for route down) In order to make some sections in the 120 to 130 mile range I had both charge to 95% (which takes a long time time) and slow down to as low as 55 MPH to ensure I got to the next charger, I seldom exceeded 65 MPH on any segment. 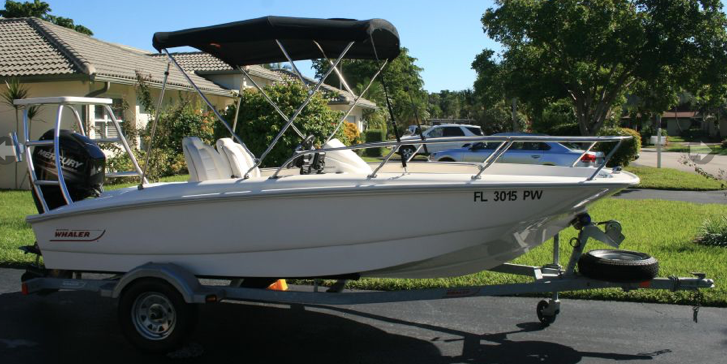 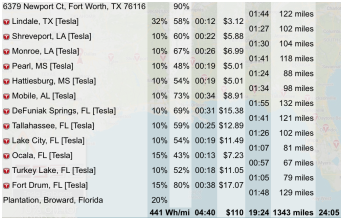 I learned to love the Energy chart - Once I understood it, and learned to trust it, I was much more comfortable. Prior to that I was doing all the range/usage calculations in my head as to how much margin i would have at the end of the segment.

I had many hours driving to cogitate on the range impact issue. I think what I need to do to alleviate the rather massive impact on range, is to have a custom cover made to reduce the wind turbulence impact. I will be garaging the boat, so I do not need protection from the elements with this new cover, just something to flatten out the interior space. I do not want the cover to go up and over the bow rail as that would create too much impedance to the airflow (I think). Looking at a custom cover at this point.

There were NO stops with pull-through charging stations. So at each stop I had to disconnect the trailer (lock it), charge, then reconnect. Sort of OK - but to reconnect the electrical connection I had to lay on the ground (No fun in the one stop with rain). I have to fix that for the next trip with a short extension cable tied to the hitch. At three stops (with lots of empty spaces at the end) I was able to drive parallel to the end charger and reach the first charger (thereby blocking 3 chargers total with the car). Multiple other charger terminals still unused in all cases.

Twice I had to get out of the way of people on expressway entrance ramps trying (and failing) to adjust speed before the end of their entrance lane. I really, really appreciated the available torque in the car to quickly accelerate even with a 1700 lb trailer and at highway speeds. Thank you Tesla.

I went to Florida with the 7-Pin to 4-pin flat adapter cable I had used for years with my little Harbor Freight utility trailer. When I had passed papers at the sellers house, and hooked up the trailer, with the adapter, the trailer LED lights did not work - much to my chagrin. In addition the Tesla did not recognize a trailer was attached. The seller said that he had purchased a special 7-pin to 4-pin flat adapter for his VW car so the trailer LED lights would work. I tried it on my car, and the lights worked - and the Tesla recognized a trailer attached. I gave him $20 and thanked him profusely for letting me have his adapter.

I really missed the self driving capability on the ride home. I had to actually keep it between the lines, and pass - manually. How…quaint.
Reactions: mattmass, Dare, AvengerBB and 1 other person
W

Good write up, glad you made it safe and good to know if i need to tow the X will do it fine.