Unexpected speed up in Autopilot 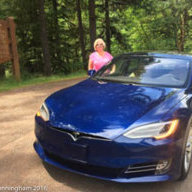 I have had my Model S accelerate unexpectedly on numerous occasions. My wife has also had the same experiences. The below speed behavior happens consistently on a section of road where the speed limit changes from 65mph to 55mph then to 45mph:

The indicator on the dash shows the cruise control speed is 57 although neither my wife or I set that speed.

Any thoughts on this behavior?

So far Tech support has not responded with an explanation.
P

I think you need to take the car to a service center immediately. Do not wait for a response from tech support.