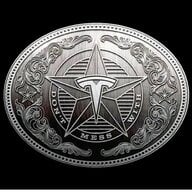 No such luck. I did pull the the thumb drive out and checked it out on my desktop there are hundreds of music files as there was before, the USB icon just isn't appearing in the media player (beam note symbol) screen: 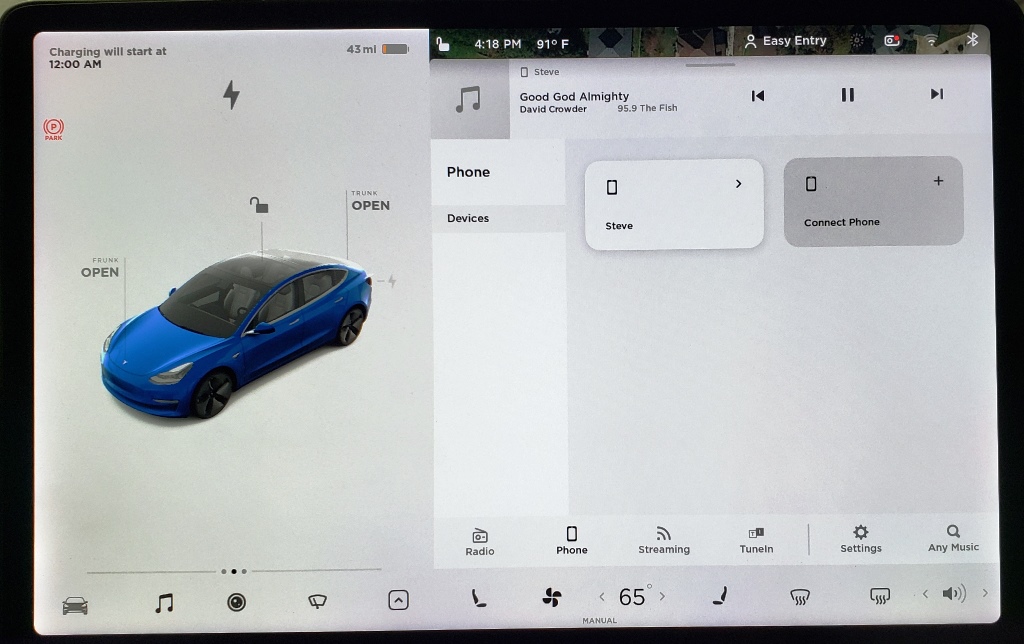 I think I may have solved the problem. If my theory proves out, it's a software glitch. I pulled the thumb drive out of the tesla and installed the previous drive. The thumb drive was bought in July of this year (256gb) and I put it in the Tesla and let the Tesla format it, which it did. I then brought it back in the house, and created two directories; TeslaCam and TeslaMusic. I added my music to the music folder and then plugged it back into the Tesla. I then accessed the drive via the USB icon and played several tunes. I then set the sentry, exited the Tesla, locked it and went into the house. Leaving my phone in the house, I walked around the Tesla to purposely set off the sentry, which it did. I then grabbed my phone and into the car to view the sentry clip. The sentry clips were there and so was my music.

Fast forward to today… I put my old drive in the car and I could view the old sentry clips and listen to my music. The only difference between the two drives is that one drive (thumb drive) is a single drive having two unique folders and the second I partitioned, one as Teslacam, and the other as TeslaMusic.

So to test my theory, I took the new thumb drive and reformatted it into two partitions, one drive as TeslaCam and the other drive as TeslaMusic… I then dumped the saved music into the music drive and some old tesla sentry vids into the Teslacam drive… viola, I have videos and music once again.

This means that the 24.4 will no longer support/recognize two folders on one drive, it must be partitioned. At least in my particular case. YMMV….
•••
G

But I'm not holding my breath. I expect the error to re-appear in a day or two. It is a software problem just not pervasive enough to get Tesla's attention.
•••
N

Same here, mostly. While I'm not getting a USB error and a sentry notification appeared on my screen this morning, there's no camera depicted on the screen and tapping on the sentry alert did not open the viewer as it would normally. It's a shame that bug reports aren't read by Tesla...
•••
N

St☰v☰ said:
Same here, mostly. While I'm not getting a USB error and a sentry notification appeared on my screen this morning, there's no camera depicted on the screen and tapping on the sentry alert did not open the viewer as it would normally. It's a shame that bug reports aren't read by Tesla...
Click to expand...

What year is your 3?

What I want is for the local service centers to escalate their unsolvable issues up the ladder.
•••

What year is your 3?

What I want is for the local service centers to escalate their unsolvable issues up the ladder.
Click to expand...

I have a 2019 SR+ and the nearest service center is well over an hour away.

This morning I tried to get a hold of customer service and their chat, as usual, isn't working - chat button is greyed out: 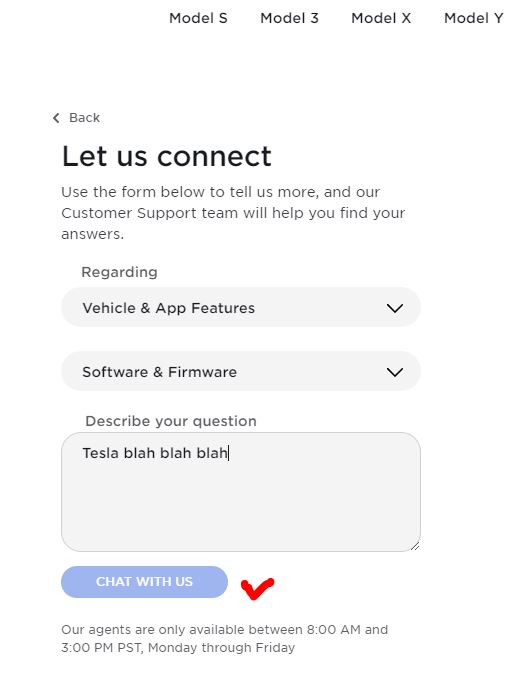 I got it..... so many people were bitching about losing their album art that Elon said "fine, let's see what you think about losing your whole music album!"

In a related thread, I just posted about how FAT32 no longer seems to be supported. 3 software updates ago by SSD was shown to have file corruption in the Tesla OS. Reformatted to FAT32, same issue. Then formatted to exFAT, and now it works.
•••
N

TESHLAY said:
In a related thread, I just posted about how FAT32 no longer seems to be supported. 3 software updates ago by SSD was shown to have file corruption in the Tesla OS. Reformatted to FAT32, same issue. Then formatted to exFAT, and now it works.
Click to expand...

I had the same issue. The software update failed. Had to go to the service center to have them resend the firmware update. He reminded me to unplug the SSD drive before doing the update. It worked perfectly after that. Received another update earlier this week and unplugged the SSD, worked flawlessly.
•••
N

I've been using a Samsung T5 SSD successfully for a couple of years now as a music library, that is, until the last Tesla software update. Since then, the car claims "USB drive file system is corrupted--Reformat drive to restore." Plugging the SSD into my PC, the drive reads normally, and...

exFat when I format it on the PC. I don't know how Tesla formats a drive. Either way all the drives I've tried fail.
Three brand new drives formatted on PC and in the car all fail.
•••

NedH said:
exFat when I format it on the PC. I don't know how Tesla formats a drive. Either way all the drives I've tried fail.
Three brand new drives formatted on PC and in the car all fail.
Click to expand...

Tesla formats it in exfat and in the process names the drive "Tesladrive".

So, over this past week (I'm retired), I've tried various combinations and various thumb drives and even one SanDisk drive. A few of my attempts are noted below.

I was able to get the Tesla formatted thumb drives to work, but not entirely. For instance, when I format a drive in the Tesla it takes the whole drive for the teslacam. I then tried to create two folders on the tesla formatted drive. While I successfully created "Teslacam" and "Music" folders, the Teslacam folder was not recognized by the Tesla sentry and thus would not store any sentry vids. Also, when I went into the media player and then the USB option, I found two folders listed there, one was music and the other was a folder called Teslacam. The music was accessible but the teslacam folder was not, meaning when I opened the sentry (little camera on the touchscreen) there were no vids saved/stored. I then took another thumb drive and let Tesla format it. I took it into the house and plugged it into my desktop. There was one folder called “Tesladrive” and it took all the diskspace. So, using disk mgmt., I repartitioned the drive into two distinct drives, in my case F and G. I left the F drive as “Tesladrive” and I named the other “Music” and dumped a few mp3’s into it. As for the Tesladrive, I created three folders in it, one called RecentClips, another as SavedClips, and the last as Sentryclips, the same way Tesla sentry would name them. I then copied a few clips from a saved drive I had (discussed later) to see if I could view them via the touchscreen.

I then ejected the thumb drive and plugged it into the Tesla’s sentry port. It should be noted that at this point, I had only gotten into the Tesla and not started it. I then put my foot on the brake pedal and effectively started the Tesla. No camera on the screen, BUT, accessing the thumb drive via the media player, I was able to see and play mp3’s that I had saved to the thumb drive. I then left the Tesla, went back into the house and via the phone app, turned on the sentry and locked the doors. Leaving the phone in the house, I went into the garage and walked around the Tesla, the lights flashed and the display showed that it was recording. Thinking I had solved the issue, I went back into the house and grabbed my phone, entered the Tesla to see if there were any sentry clips… NOPE! There was still no camera lit up or even greyed out, it just wasn’t there.

My next dubious attempt was to take another virgin thumb drive and using windows format it to exfat, then using disk mgmt., I created two drives on the thumb drive, both exfat and named them just like Tesla would have. Again, for the music drive “G”, I saved a few mp3’s and this time, I left the teslacam alone to see if the Tesla would recognize the drive and create the sentry folders within it. Back to the Tesla and inserted the drive into the sentry port and hit the brake again. Now I had the sentry camera lit up, but no music. At this point, I removed the drive, went back in the house and grabbed a glass of merlot.

Finally, out of desperation, I took my old SanDisk drive and went back to the garage. This drive was created quite some time ago using windows to create two partitions, teslacam and music. I plugged it into the sentry port and hit the brake pedal. The camera lit up and I had music. So, for kicks, I exited the car, back into the house, and activated the sentry and locked the Tesla. Then back out to the garage without my phone. As before, I walked around the car, the lights flashed and the screen lit up with the “recording” message. So, back in the house and grabbed my phone. Sat in the Tesla and without putting my foot on the brake, I could see the camera was lit up and the red light was present. Touched it and then opened the sentryclip folder. There was a new clip of me walking around the car from a few moments earlier (and a bunch of clips from several months ago).

I can’t explain it, but I left the old SanDisk in the Tesla and tossed the 3 thumb drives (all Samsung) into a drawer in my home office. So, for now my sentry and music both work, though I still don’t have any album art, but I’m OK with that.

Thanks for the long explanation. I don't use my drive for music but its worth a try to create two partitions and see what happens.

So to clarify did you create two partitions or two folders/directories under the TeslaDrive root folder?
•••

Finally Over: A YEAR With Error "USB Device Malfunction UI_a112"