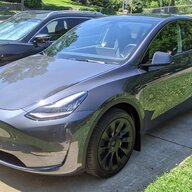 I'm not sure if this is allowed but given the circumstances I figured I would try and I personally own a Tesla Model Y.

My father-in-law just unexpectedly passed away on Friday and we're trying to help my mother-in-law sell things she no longer wants or needs.

They previously owned a Tesla Model 3 and still have Taptes Seat Covers for Tesla Model 3, Full Set, Coffee brown with black piping, litchi grain synthetic leather with no Tesla logo on the front headset covers that we are looking to sell. They were order in December 2020, didn't arrive until April 2021.

He installed them in their Model 3 and they only used them until they upgraded to a Tesla Model Y in late June 2021 (also selling brand new Taptes Model Y seat covers in another post). They have no damage and were barely used.

Hi, I’m interested. Pls pm me if you can, I couldn’t figure it out how to do it. Thanks

BeeBeeTee said:
Hi, I’m interested. Pls pm me if you can, I couldn’t figure it out how to do it. Thanks
Click to expand...

meyerat93 said:
I believe since we're both new members we're not able to PM each other until after several comments and "leveling up"

You can email me at: [email protected] gmail.com
genius, I know

BeeBeeTee said:
You can email me at: [email protected] gmail.com
genius, I know
Click to expand...

H
Do they use seat covers at service center?