I used the UMC at first, but charging at 32amps got the cord pretty warm after a fairly short time. It never got hot, but any appreciable warmth is just wasted electricity. The battery/onboard charger cooling circuit would also activate fairly often. Lowering the amperage to 22 was the point where the cord stayed near ambient and the car's cooling fan rarely comes on. Even with my 120mi daily commute, 22A is plenty of speed to recharge every night.

I have now switched to a Grizzl-e EVSE, but I still only charge at 22A instead of 40A. Much less voltage sag and cooler running operation. I'm on a pretty old electrical grid in an 1800's founded small town in the middle of nowhere, so I feel safer not stressing it. Everything in this town is dated, the water system was (until last fall) still using the original cast iron water pipes from the early 1900's that were corroding away and always leaking. I think they replaced the original sewer lines too in that project.
Reactions: Rocky_H
••• 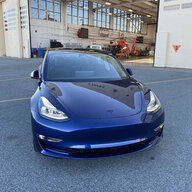 Sunny5280 said:
Thank you for the heads up on this. I'll have to investigate my need for CHAdeMO adapter. Has anyone else found a need for it?
Click to expand...

No. Between 14-50 at my house and superchargers I do not see the point. I live in SF/California so supercharges are everywhere.