I wrote this up as a guide for myself and my SO to help transitioning from V10 to V11. Thought it might be helpful to others. I know many folks feel that V11 is a mixed bag at best. This isn't intended to address that, just to help find and do things that we were used to doing a certain way in V10 and is now different. Let me know what I've got wrong and what I missed. BTW, I listed features alphabetically but might have used my own names for things which obviously would affect the order.

Update: Thanks, everyone. I've incorporated the comments received so far and made a new version with selected pics of the UI.

Backup camera button: No longer fixed on the bottom of the screen. Can be added back as one of your “favorite” control icons. Here’s a shot of all the icons, with my “favorites” fixed at the bottom.

Bluetooth/Notifications/Connectivity (cellular/wifi), and HomeLink (if applicable): These buttons that used to be always on the top of the screen will now display at the top right of the Controls panel.

Climate controls: This used to be accessed by a fan icon. Now, you can bring up the full climate control panel by either tapping the current temperature or swiping up from the bottom of the screen. Note that the fan control is now a slider, with the option of direct setting by tapping anywhere on the slider but no + or - buttons.

Also, you can bring up a mini climate panel by tapping a temperature arrow (which does change the temperature one degree whether you wanted that or not, so you would need to then touch the other one if you want to retain the exact setting).

Dashcam: No longer fixed at the top of the screen. The viewer can be set as one of your “favorite” control icons.

Defrost and defog: No longer fixed buttons on the bottom of the screen. Now available in climate controls (see above). Not available to be pinned as “favorites”, so most convenient is pressing a temperature arrow for the mini panel.

Homelink: Now appears when at home location at bottom of left display, with a large “Activate” button, and also the prior small Homelink icon now at the top left of the map. If you don’t have your seatbelt on when the large button at the bottom left is showing, the seat belt warning will cover it, but you can still access the small icon along the top of the display. The Homelink icon also appears at the top of the “Controls” panel, in case you want to access it when at some other location.

Lights: Pushing the left stalk forward, which I think has always turned auto-highbeams off/on, now brings up a mini “Lights” control panel. Note that this seems to only come up when auto-highbeams is off, so if you have them on, you'll need to push it twice (which you'd need to do anyway to retain your setting).

Map charge locations: Used to be accessed by tapping the map to bring up the lightning bolt button and pressing it. Now it’s under “navigate” as a button with the word “Charging”.

Map orientation: The map orientation button (North up, Route squiggle, or Car direction) that used to always be on the top right of the map, is now on the top left, but is covered up during navigation. To display it again, tap the map.

Music/media panel: These are now separated by service (although the various services can be accessed from within each other, and some favorites from different services are still listed together). You might want to make one or two of your services (radio and bluetooth for me) fixed as “favorites” on the bottom panel. FYI, there are three sizes of this panel. It’s trickier than before to change between the two smaller sizes by dragging the top bar, but you can use the modified three-line “hamburger” icon (with a little triangle in the corner – what’s that called in the iconography world?) to toggle between the sizes. Once you pick one of the smaller sizes, the swiping action will switch between the large and whichever smaller you pick (and swiping further down will of course close the panel).
Full: 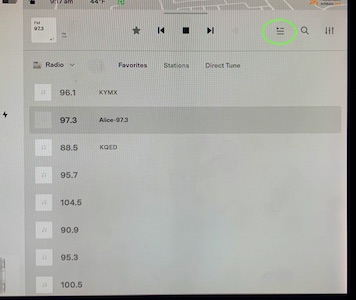 Seat heaters: No longer in a fixed position at the bottom of the screen, nor available as icons to add there. New “Auto” setting available (but only when overall AC is set to “Auto”). Access the seat heaters under the climate controls (tap the current temperature setting). For the driver only, it’s also available under the mini climate panel (tap a temperature arrow).

Tire pressure: No longer available as a card. Now under the “Service” panel. If you use voice commands, you can say “Open service settings”.

Trip odomoters: No longer available as a card. Now under “Trips”. If you use voice commands, I think you can say “Open Trips”.

Windshield wipers: No longer available as a card. Now under the “Controls” panel, although it’s generally easiest to bring up the mini Wipers panel by pushing the stalk (although that will do a wash/swipe whether needed or not).

Thanks for writing this up, very nice summary. I looked at the service screen for tire pressure, but it’s not there. I can’t find it anywhere.
•••
B

In addition, when it is super cold, spraying the window can cause an instant layer of ice.
Reactions: GSP
••• 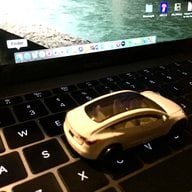 Why would Tesla feel changes were needed when others were more intuitive? New system is difficult for infrequent drivers. Yes, I can use it, but I’ll grumble as I do.
Reactions: pilotSteve, AustinPowers and WattsappMTL
•••
W

Jumpin J said:
Thanks for writing this up, very nice summary. I looked at the service screen for tire pressure, but it’s not there. I can’t find it anywhere.
Click to expand...

You're probably looking when the car hasn't been driven. Unlike the previous tire pressure card which showed dashes, the new display is completely blank when the data isn't available. That concept should have been carried over to prevent confusion like this. After you start driving, pressures will be shown beside the wheel locations on the vehicle image.
Reactions: GSP
••• 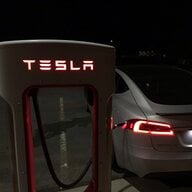 Rich C. said:
Very helpful. Thanks for posting and for updating. And to the crew: I haven't seen the Auto Park P indicator since the update. It would have shown up where the Blind Spot Camera nows appears. Anyone else missing their Auto Park?
Click to expand...

SylvainG said:
Hmm, if it's about critical to driving, then I would say the wipers function shouldn't be buried in a menu. I know it doesn't rain often in California but it does in almost everywhere else.
Click to expand...

I have never owner a non v11 Car but how is is bruried in a menu? It is one of the few things that has a dedicated button on the stalks.

Funnily I find v11 to be quite intuitive after Reading this post. But maybe that is not knowing it Can be better
•••

Alowan said:
I have never owner a non v11 Car but how is is bruried in a menu? It is one of the few things that has a dedicated button on the stalks.

Funnily I find v11 to be quite intuitive after Reading this post. But maybe that is not knowing it Can be better
Click to expand...

You never miss what you never had
•••

It rains a whole lot here in W WA. I just push the left stalk and controls pop up. Seldom does Ms Tesla keep up with the spray and torrents.
I do miss the % remaining charge on Nav screen.
Last edited: Mar 1, 2022
•••

Sans-gas said:
It rains a whole lot here in W WA. I just push the left stalk and controls pop up. Seldom does Ms Tesla keep up with the spray and torrents.
I do miss the % remaining charge on Nav screen.
Click to expand...

It’s not an improvement when we have to go looking for what used to be visible.
Reactions: GSP and Transformer
•••

Who said anything about an improvement? Most of the V11 changes are steps backward IMHO.
Reactions: GSP, hybridbear and Sans-gas
•••

Don’t even ask how I dislike the HOME LINK revision! Grrrr. They obviously either have very tiny fingers or didn’t bother to test it. Both location and format size are wrong.
•••

Legacy V11 has some quirks, but overall I think it's an improvement

A
Do Some V11 Issues Warrant NHTSHA Reporting? Here's How to Do It.