I have been charging my car ever since I bought it exactly a year ago on a wallbox pulsar charger at home. Suddenly, a week ago it stopped working. It makes the usual noise it always makes and the "starting to charge" message shows up on the screen and within five seconds the car's display says "stopped charging." The light at the charging port turns from pulsing blue to red. When I look at my wallbox phone app it says "waiting for car demand." And when I check the car's display it says "Unable to AC charge -- Unplug and retry."

Another piece of info -- this weekend my daughter brought her Nissan Leaf over and it's charging just fine on the same Wallbox equipment. The Tesla charges just fine at other charging locations -- e.g. on level 2 Chargepoint equipment at my work. Has anyone else had similar issues? Any advice on what to do? I am still on an email communication thread with Wallbox, but also want to see if there is some hive mind wisdom that'll emerge from Tesla owners here.
••• 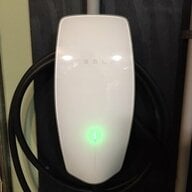 Let me try that. Thanks for the suggestion.
•••
E

@howardnj: I tried the soft reboot. Unfortunately it didn't work. Thanks anyway. Worth a try.
•••
E

More weirdness to report -- had my neighbor bring his model Y over and it seems to charge his car just fine. So it's clearly just my car whatever the issue is. Have scheduled a mobile service appointment for Wednesday. Will post more details when I know more.
•••
E

An update -- I finally took my car to the Tesla service center. Initially they gave me the run around and said everything was OK on a Level 1 and Level 2 charger, but then came back and said it gave them some kind of alert when they were running some diagnostics in Level 3 charging mode. Long story short, they replaced my charge port (under warranty of course), and everything is back to normal. The Wallbox at home now charges the car. Hopefully this problem won't recur.
Reactions: Joe Schmoe88 and exxxviii
•••

Model S limited to 16A charging with new Wallbox charger

Model 3: Battery & Charging Apr 13, 2022
Philhynes01
P
B
Charges whenever plugged in regardless of scheduled charging or stopping it