If you are traveling Northbound on California Interstate I-5 and plan to use the Tejon Ranch Tesla Supercharger, be on the lookout as soon as you begin to leave the freeway at Exit 219 B (Laval Road West). There is a deep pothole which I did not see that immediately on hitting, flattened my right rear tire. I drove slowly to the supercharger where there was another car also with a flat tire that had hit the same pothole. On closer inspection, my front right tire was also severely damaged showing a large sidewall bubble. After being transported to a tire store in Bakersfield, I was able to resume my travel to Oregon four hours later with two tires replaced. I have notified CalTrans and would encourage others who have had a similar unfortunate experience to do so. Hopefully it has been or will soon be fixed. My accident was on October 24, 2019.
Reactions: jjrandorin, follow.johnny and Dre78
•••
S

This would probably be the best place to post it.

S4WRXTTCS said:
This would probably be the best place to post it.

Thanks. I've followed your suggestion and posted it there.
••• 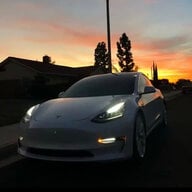 @AshlandWalker Thanks for the heads-up! Do you mind if you can screenshot the exact location using Google Maps? This would definitely help out other owners who are driving to this Supercharging. I've stopped by this location on my way to SJ/SF.
•••
O

Is there any recourse from the state for wheel or vehicle damage in cases like these?
Oliver Barrett
•••

Model 3: Driving Dynamics Aug 24, 2022
mswlogo
M
S
SoCal to Washington - aka There and back again.

Hit a Pothole; Tesla Service Center does not have replacement tires