Where to charge near Deadwood, SD?

I will be road tripping with my family this August to South Dakota from Chicago. I've mapped out our route using ABRP, and we even have access to Tesla destination chargers or generic J1772 chargers at all of our hotels/cabins/motels, etc. with the exception of one. We will be staying in Deadwood, SD for one night, and I am looking for charging options. I have reached out to the hotel to see if there are any exterior receptacles that we can use or if we can park near our room and just use an extension cord from there. (I am a bit obsessive and have various adapters for most charging options from NEMA 5-15 up to 14-50 and everything in between.)

I've looked on Plugshare and the charging options in town look minimal. Worst case, i could always go to a Supercharger in Spearfish, SD.

If anyone knows of a good free or (reasonably priced) paid L2 charging option in Deadwood near Cedar Wood Inn, I would appreciate some suggestions. 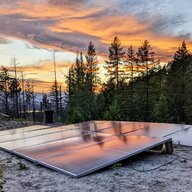 The Supercharger is 20 miles away. The exterior receptacle for even Christmas lights would be fine to pick up the 3-5% of charge you lost driving from that supercharger to your hotel. Not sure which car you own. Long and short if you really wanted a charge you should have picked a hotel before that had charging. So the supercharger to 95% would also be ok. Drive and lose the 5% wake up with 90% or so.

Have used Cadillac Jacks, but that won't likely help you for what little is gained. There are plenty of pretty loops to drive in, Custer State Park, Badlands, etc, where you could end your drive in Spearfish supercharger and then end up at hotel. Sometimes my great idea is dropping the family to get settled in, and then go charge.

I was in Binghamton NY last night, and someone unplugged my car at 3am. Leaving me at 70%. I wanted, and had it timed to be at 95 by the time i left in the am. Had I gone to the supercharger, I wouldn't have had that issue. Just saying sometimes the night charge doesn't always work out as planned at destinations.

Edit: As a reference I have 42 nightly destination charges since the Sound of Silence Rally in Custer SD this year. From middle of Nevada to Rhode Island. Only a few mishaps. Mostly older systems of neglect. All solvable, just at inopportune times. I also travel with my bag of tricks. I can charge just about anywhere.
Last edited: Jul 20, 2021
Reactions: MattChristian
R

We'll snoop around the hotel once we get there for a slow 120v "trickle" overnight if needed.

We stayed at the 1899Inn in Deadwood in 2019. The owner had a Chevy Volt at the time. It looks like there are new owners now, but you may check them out, if you are looking for lodging in Deadwood with charging.