You are using an out of date browser. It may not display this or other websites correctly.
You should upgrade or use an alternative browser.
O

The windshield on wife's 2018 Tesla Model 3 experienced a large crack due to a rock kicked up on the freeway. I walked in to the local San Diego Tesla shop to ask about the replacement process (Kearny Mesa location). Staff was very pleasant and explained Tesla does not work with Insurance companies, replacement would have to be on my dime and then I would have to submit to my Insurance company for reimbursement. I asked who does their Glass Replacement and was told they use a 3rd party company: Heckman Glass. I contacted Heckman Glass and found out they work with my Insurance company (Farmers) I submitted my claim to Farmers and Heckman Glass took the ball and ran with it from there. Heckman Glass replaced the windshield today and did a stellar job. Not one smudge on the white cloth like material on the side pillars. I had Glass Deductible Waiver on my policy so I only had to pay $100 directly to Heckman Glass. Following a windshield replacement the forward camera has to be recalibrated. I have an appointment at the Kearny Mesa location next week, quote for recalibration is $95. Will pay out of pocket for that need and then submit to Farmers for reimbursement. Not too much of a pain once I figured out the path of least resistance and out of pocket expense. Heckman Glass technician indicated they have been working on on Teslas since 2012.
Reactions: KenC, 5150, Gasaraki and 1 other person
I

I had mine replaced at the Tesla shop I assumed they did it but it could have been subbed out to a glass company. I did like that it was official Tesla glass and and not generic glass I got with all my other cars even if taken to the dealer. I did not use insurance though mine was a warranty issue.
G

Anyone know if Safelite does Tesla windshields? Just asking for future considerations.

They don't around here- insurance company tried to send me to them originally and they told me they don't work on Teslas, only Tesla does because of the cameras- seems to vary by region though.

so I had mine done at Tesla (dropped off in morning, got a loaner S75, picked up that evening). Same deal with I had to pay OOP and get reimbursed- which means I technically made a profit (credit card rewards).
Last edited: May 13, 2021 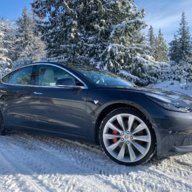 Safelite did my windshield replacement a year ago in the Seattle area. That was at the recommendation of my State Farm agent, and they did a great job. They told me they do a lot of Teslas, and in fact, there was a Model S in there for a new windshield when I dropped off my Model 3. Took about two weeks for them to order up a windshield from Tesla though. In the meantime I just drove with a crack. I was initially told that I'd have to take it to Tesla to have the camera re-calibrated, but when I talked to Tesla they said "not necessary - the car will recalibrate itself". They were right - I just drove a few miles and it was good. Overall, a decent experience.
Reactions: MyWhiteY, KenC and Gasaraki
M

I just used SafeLite in Oregon. They did a great job and $50 deductible but could not recalibrate the sensor. My son noticed the Tesla has a built in recalibrate feature. Does anyone know if that suffices or do you really need to bring it in to Tesla?

Mnemonicks said:
I just used SafeLite in Oregon. They did a great job and $50 deductible but could not recalibrate the sensor. My son noticed the Tesla has a built in recalibrate feature. Does anyone know if that suffices or do you really need to bring it in to Tesla?
Click to expand...

No you don't need to bring it to Tesla. You can do the calibration yourself after clearing out the existing camera calibration in the Service menu. Calibration works the quickest if you drive the car on a straight multi-lane highway with clear lane lines.

See page 81 in the manual for details.
https://www.tesla.com/sites/default/files/model_3_owners_manual_north_america_en.pdf

The people doing windshield replacements won't calibrate them given it takes many miles of driving to do so, so it's not worth it to them.

Had a crack repaired by safelite and while chatting to the technician he told me that they regularly replace Tesla windshields. As has been mentioned they wont calibrate as that requires driving. You can just self calibrate though.
O

I dropped off my car at Tesla at 9:30 am, they gave me a loaner Model 3 and messaged me the same day to pick up the car. I paid the cost for the work that day, submitted the reimbursal to Geico Tuesday, and received the money in my checking account by Thursday. Made a lot more sense to me to let Tesla replace the glass and calibrate it themselves, rather than making multiple appointments at different places.
Reactions: TBrownTX
C

What is the cost of the windshield replacement without insurance? I am trying to decide if it’s worth going through insurance or not.

corners said:
What is the cost of the windshield replacement without insurance? I am trying to decide if it’s worth going through insurance or not.
Click to expand...

Also you might wanna check on the cost to get $0 deductible on comprehensive (which covers glass)- It was just a few bucks more here, meaning if I replace like 1 windshield a decade it's still worth the $0 deductible premium... and I definitely need it more often than that.