Wonky powerwall numbers, is this normal?

I had a recent 16kw solar panel install with 2 powerwall 2s, inspection passed but I’m still waiting for PTO from national grid. On the app it looked like the powerwalls were charged to ~25% during the install and then gradually bled down to 0% over the past 3 weeks. I had storm watch turned on and it activated a few days ago, charging the powerwalls from the grid. Looking at the app, they were taking in a steady 5.1 kW for about 3 hours, then the app said they took in a total of only 7.7 kWh and somehow went to 99% charged. I was under the impression that they should have taken closer to 27kwh (13.5 each)? Then, a couple days later, they had bled down to 95% being on backup-only. They started charging from the grid again. This time, the graph shows they took in about 5kw for 3 hours and took in 15.5kwh total, going from 95%-99%. Obviously these numbers don't make much sense, I feel like I'm looking at a Windows 95 loading screen. Is this normal behavior on a new system? Screenshots attached. 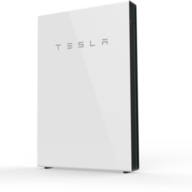 We’re those grid service events? Click the right most circle in the Tesla app above the graph and see if that lines up.
•••
D

The first time or two my Powerwalls charged after being installed with partial charge in the batteries I seem to remember something similar to what you describe. Once PTO came and they were operating normally with regular charging and discharging they seemed to figure themselves out. I would keep an eye on them the first week after PTO and if they were still not making mathematical sense, give Tesla support a call. But I’m betting they will self-calibrate.

Storm watch isn’t the same as grid services. It looks like you signed up for the Connected Solutions program being offered in Massachusetts with National Grid and Eversource as a virtual power plant controlled by Tesla. I have as well. It I s indicated by the fifth circle above the graph in your Tesla app to the right of the grid circle. I asked this because those amounts may have been sent back to the grid after being put in your batteries. In the pictures you posted the grid circle is not turned on so we cannot see if the power went back out to the grid. Turning on the grid and grid services circles in that graph may show the power leaving from the batteries back out to the grid and account for some of the discrepancy of SOC.
•••
D

Thanks for your answer that’s helpful. Yeah if I touch grid services for the first day it says “from grid services 7.7kWh, to grid services 0kwh” so it didn’t send anything out. My bet is it’s just calibrating and will start to make sense once it’s being drained and charged more frequently. I don’t think it will start doing the connectedsolutions thing until PTO but I could be wrong.
•••

I had one grid services event before PTO and one soon after, but I was only waiting for PTO for a week. So maybe those events are part of the setup process for tying the batteries into the virtual power plant? Just speculation on my part though.
•••