Would you return this vehicle? 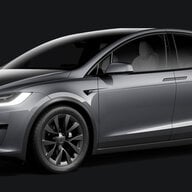 We took delivery of an inventory performance X over the weekend. The car had 1,200 miles on it, a curb rashed wheel that was due-billed and a very heavily scratched interior center console, which was also due-billed. Initially, there was no price adjustment but we asked for one to be given due to the age of the vehicle (5/19 build) and the miles. They came back with a $4K adjustment which I thought was very fair. However....we have noticed several issues over the past two days that have me leaning towards returning this car and waiting for a new build.

1. They pumped an air freshener into the HVAC system to get rid of a moldy smell it appears. The harsh chemical smell of the air freshener is nauseating for the whole family and burns my throat. It hasn't gone away after running the A/C on bio-hazard mode all afternoon to try and clear the smell.
2. There is trim loose both on the lower side of the passenger seat and under the glove box that needs to be reinstalled.
3. The black shiny wood trim is blinding in the sun, would not choose this next time.
4. With all the issues to be due-billed we do not feel like having a car in service for that time. Service has been a nightmare for us.
5. I see 8 miles of 'degredation' already, however that could just be an imbalance in the BMS due to do too much supercharging and we could bring it down to 0, charge it back up again but it concerns me having a car that's probably been exclusively supercharged up to 100% for its first 1,200 miles as a demo car.
6. Driver's door window takes almost twice as long as the passenger window to close. It's getting stuck half way up and really struggling. I could see this failing very soon - right before rainy season.
7. Rattles EVERYWHERE - in the doors, under the floor, in the A and B pillars.
8. Someone must've filled the windshield wiper fluid reservoir with soap. It's dark blue and stains the glass...Never seen THAT one before!
9. The driver's door actuator (that pops it open) already sounds like it's about to break. I only know this because it broke on our last car and this is what it sounded like right before it was about to go.
10. It also feels like we have the acceleration shudder problem. I believe this was fixed on newer builds the last couple of months.

Would you return this car?
•••

B
My MX smells like something died in it

A
specific flow of lease return process, anyone?

Model 3 Nov 16, 2022
astrorob
A
M
MXLR rejected, Loveland, CO - mild pressure and mild BSing from the SA to take it