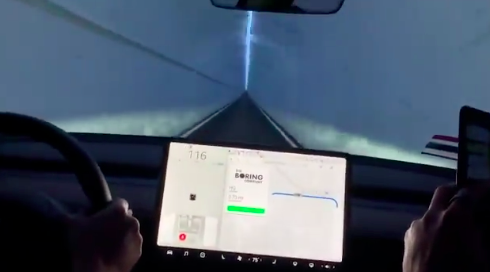 A new video has surfaced online of a Model 3 zooming through the Boring Company’s tunnel in Los Angeles at 116 mph.

The video shows a Model 3 loaded with passengers being lowered into the test tunnel. Then, the driver pulls up a Boring Company app on the car’s screen to hit a button labeled “Request Departure.”

“We usually offer a slower ride on Autopilot or a fast ride [with] manual driving,” the driver explained. He appeared to navigated the tunnel manually, reaching a top speed of 116 mph before the car began to slow down. It took roughly one minute for the one-mile ride.

It’s worth noting that the vehicle was not attached to any other tracking system and seemed to be fully guided by the driver. This could signal a change in the Boring Company’s plan, which previously used “tracking wheels” to guide the vehicle.

The company released in December 2017 a map of its planned network of underground tunnels in Los Angeles.

The first route will be the 6.5-mile “proof-of-concept tunnel” through Los Angeles and Culver City. “The tunnel will initially be used for construction logistics verification, system testing, safety testing, operating procedure verification, and line-switching demonstrations.” If the company is successful in completing the project and proving it safe for public transport, Phase 2 will extend well into the outskirts of Los Angeles county.

The original video shared to YouTube by venture capitalist Steve Jurvetson, who is currently a board member of SpaceX and Tesla, was deleted, but another version was posted to Twitter. Check it out below. 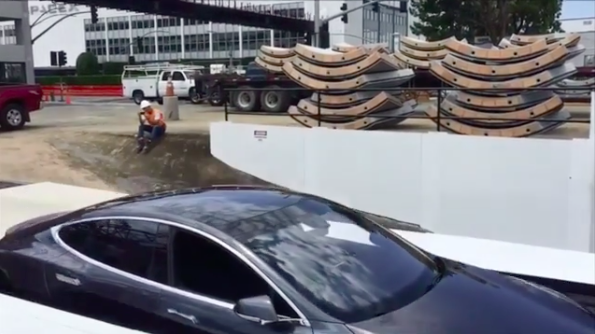 This Month Tesla Already Delivered Over 4,000 Model 3 In Norway

Powerwall 2 Design Sorry for the off topic post here but... Can I say just how much I love this section of TMC? This thread is a perfect example. People really try to he... Post by: jjrandorin, Yesterday at 7:05 PM in forum: Tesla Energy

Coronavirus madodelSpeaking of COVID-19 and politics, in the Pennsylvania House of Representatives, a Republican member had symptoms, tested positive told his Rep... Post by: TespaceX, Yesterday at 5:45 PM in forum: TSLA Investor Discussions

Coronavirus dfwattIt was this guy with the flue comment - his spelling aint much better than his common cents (sic). It's a mystery as to why Moron Spray is... Post by: SVMike, Today at 1:00 PM in forum: TSLA Investor Discussions

Cabin Overheat Protection A/C not working for 2 mo ... I have observed that for the last two months my cabin overheat protection is not working properly in A/C mode. Frequently I walk up to the vehicle it ... Post by: BM3B, Today at 2:48 PM in forum: Model 3

Great Tesla Service Experience I just picked up my 2015 Model S here is IL. Had a great experience - thought I'd share what the "contactless" experience is like. I or ... Post by: Damager99, Today at 11:21 AM in forum: Model S

Model X reliability... Hi Everyone, Newbie here, thinking of joining the Tesla world. Used Model Xs have depreciated enough to the point where I can begin to think of purcha ... Post by: docboy, Today at 10:42 AM in forum: Model X