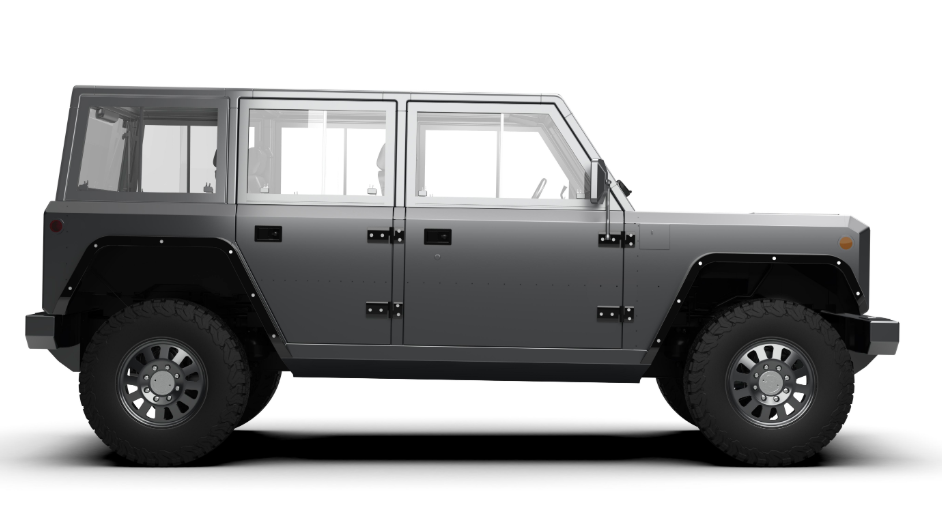 One of the first companies to create chatter about an electric pickup truck was Bollinger Motors.

The public received its first glimpse Bollinger’s “sport-utility truck” concept at a press event in New York in September 2017. Two years later, the company has moved its headquarters from Hobart, NY to near Detroit for final engineering and is ready to debut the vehicle in its final form.

“From the ground up, the dream was to build something that didn’t exist,” reads the company’s mission on its website. “We’ve taken our time and not over-promised anything. We’re engineers making an electric 4×4 truck – clean and simple, built to last. Nothing frivolous, nothing unnecessary. All electric. All aluminum. All wheel drive. And we’re building them right here in Detroit.”

Robert Bollinger is the company’s founder. He had no automotive experience prior to starting the company, rather he spent 15 years in executive positions at a hair and skin care company. But, while working on his upstate New York ranch he recognized an opportunity to build a tough, capable EV that could be used as high-quality work truck. So, he tracked down a small team with automotive, design, and electric powertrain experience and hired them to help build his dream.

The company plans to debut its B1 and B2 vehicles on September 26.

B1
The B1 attracted some good attention when its design was first shown. It’s boxy, utilitarian, and stripped down with analog gauges and a simple interior.

“If you could take everything you love about a classic truck and combine it with the most refined essentials of a modern truck, redesign it with the highest quality materials and components available, oh and make it an electric vehicle – you’d have the basics for the Bollinger B1 electric sport utility truck,” the company says on its website. “There is nothing on the planet like it. Every touch point, every seam and every surface has been thought out for the ultimate utilitarian purpose. This is our baby. The one we’ve put every ounce of research and development and time into. The one we scrapped and started over for getting too complicated. The one we love the most. This is the all-electric truck that didn’t exist until our truck-obsessed engineers built it from scratch.”

B2
The B2 electric pickup truck is the big brother of the B1. “Same everything inside and out, except the long bed mullet haircut.”

It’s capable of carrying 16-foot cargo through a patented full-length pass-through. With the rear seats out, you can transport a stack of 4x8s with the tailgate closed.

Specs
Both the B1 and B2 have all-aluminum bodies, all-wheel drive, and powertrains offering 614 horsepower and an estimated EPA range of 200 miles from a 120 kWh battery pack. Both seat four.

Bollinger claims the trucks will go from zero to 60 mph in 4.5 seconds and have a top speed of 100 mph.

The vehicles have 15 inches of ground clearance, 10 inches of tire travel, a 5,201 pound payload capacity, a 7,500 pound towing capacity.

Customization
People seem to love the utilitarian simplicity of Bollinger vehicles, with comparisons to beloved off-road machines like the Land Rover Defender and Jeep Wrangler. It’s designed for people who intend to get the vehicle dirty, who might need 15 inches of ground clearance and capability to haul 5,000 pounds.

Just because the vehicles are intended to be minimalist doesn’t mean they have to be boring. The top and doors are removable for off-roading in the open air. Bollinger has plans for additional add-ons that appeal the off-roader. Renderings shared by the company show the B1 and B2 with the original doors replaced with tube-frame doors. They also the trucks with roof racks stacked with lighting mounts, headlight grilles, fender flares, and a sturdy winch.

Bollinger didn’t say when the accessories will be available, but it’s clear the Bollinger vehicles will be an interesting platform for customization.

Price
It’s cool and capable, but what does it cost? We don’t know yet.

Many industry watchers have speculated that the price tag could range from $60,000 to $100,000. Obviously that kind of money buys well-optioned Ford, Chevy, and Ram trucks. But, Bollinger’s potential buyer wants an EV, so they’ll have to compete with other new entrants like Rivian and Tesla. Elon Musk has said Tesla’s upcoming pickup could cost $50,000.

EV Pickup Momentum
It’s amazing how frequently you see electric cars on roadways today. Tesla plans to deliver up to 400,000 Model 3s this year alone. You can spot them everywhere.

The same can happen for an electric pickup. And, there seems to be enough momentum with several companies – both startups and traditional automakers – aiming to get electric trucks on the road in the next few years.

It doesn’t seem Bollinger is aiming for your mass-market consumer, but they will help build interest. It will be exciting to see what the company has to show off in a few weeks and hear an updated timeline on delivery.

Jaguar Delivers First I-PACE In U.S. – Owner Not A Fan Of Tesla’s Style

Model Y delivery yesterday - few thoughts relative... Had a long range Model Y on order and heard that the local SC had a few Y's that had become available. The long range in Midnight Silver was clai... Post by: WolfieSenior, Today at 10:41 AM in forum: Model Y

Coronavirus On the lighter side, you can buy C19 masks for your dog. Two dogs and a cat have been documented to have caught C19 from their owners. This will certa... Post by: MXLRplus, Today at 8:34 AM in forum: TSLA Investor Discussions

HELP: stock springs Hey can someone help me. Not sure what I’m doing wrong but trying to put the stock springs back on. I have everything lined up. Spring to the bottom o ... Post by: pwrusr, Today at 2:32 PM in forum: Model 3

Does Model S HVAC have air ionizer? I came across the following thread but no conclusive answer: What happened to the Ionizer? It seems the Model S used to explicitly have an air ionizer ... Post by: PhilDavid, Today at 2:49 PM in forum: Model S

Take your Tesla to the Emergency Room! Last night my husband needed to visit the ER. Something we avoid like the plague and especially didn't want to go due to the pandemic. Two weeks ... Post by: jordanX, Today at 2:26 PM in forum: Model X