On August 31st, 2021, “Troy Teslike” tweeted data from his long running survey of thousands of Tesla vehicle buyers, showing a low take rate for FSD, Tesla’s “Full Self Driving” software add-on offered since late 2016. For Q2 2021, that survey shows a worldwide FSD take rate of only 11% across all Tesla models, compared to a high of 46% in Q2 2019. Rather than simply assuming this represents a major loss of confidence in FSD, it is worth examining the data and understanding the factors that led to this decline.

First, let’s look at the Q2 2019 spike in FSD take rate. In the span of two quarters, the take rate for the Model S rose from 33% to 81%, and for the Model 3, it rose from 15% to 46%.This can be explained by changes to Tesla’s self-driving packages and reduced pricing. Before February 28th, 2019 (late Q1 2019), Tesla offered Enhanced Autopilot (EAP) and FSD. EAP contained a less-polished version of all current Autopilot features, namely autosteer and auto cruise control, and some of today’s FSD features, including auto lane changes, Navigate on Autopilot, and Summon. FSD, at the time, offered no additional, working features, only the promise that Tesla would later avail buyers of autonomy features as the software improved. It stands to reason that, with no working features, FSD would have had a low take rate.  Then, on February 28th, 2019, Tesla stopped selling EAP, introduced a more basic Autopilot package priced at $3000, and began requiring buyers to purchase FSD for features formerly in EAP.  FSD, now priced at $5000, became a useful addition to the vehicle.

In the same Tesla announcement on that day, in addition to the FSD package receiving new features, Tesla offered sale prices on Autopilot and FSD for new vehicles. This was great for new car buyers and contributed to the spike in FSD take rates, but it had the potential to instantly decrease the resale value of existing owners’ vehicles. In response to backlash from existing owners, Elon Musk tweeted that Tesla would offer a discount on Autopilot and FSD for existing owners:

A table shown to Tesla’s customers at the time (and shared by Troy Teslike) clarifies the statement Elon made:

This substantial deal was a large motivator for many Tesla owners to purchase Autopilot and FSD at a large discount, and for the portion who had previously ordered and received vehicles with EAP, their vehicles were automatically upgraded to FSD at no additional cost. Given the discounts and package changes, the Q2 2019 spike in FSD purchases is understandable.

On a number of occasions over the years, Elon Musk has put forth FSD timelines that have proven to be overly optimistic. Without Elon’s high level of optimism, Tesla and SpaceX would almost certainly not be where they are today. At the same time, this has created unmet expectations among a number of potential FSD adopters. It is understandable that some pessimism surrounding FSD would have contributed to the decline in take rate following Q2 2019.

However, there are less concerning and more practical reasons as to why the take rate has tanked so much in the past two years. Price has been a key factor. Since Q2 2019, the price for FSD has gradually increased, but ultimately, it appears that the larger price difference between Autopilot and FSD, as well as the decrease in the average selling price of Tesla vehicles have been the primary causes of the take rate decline. 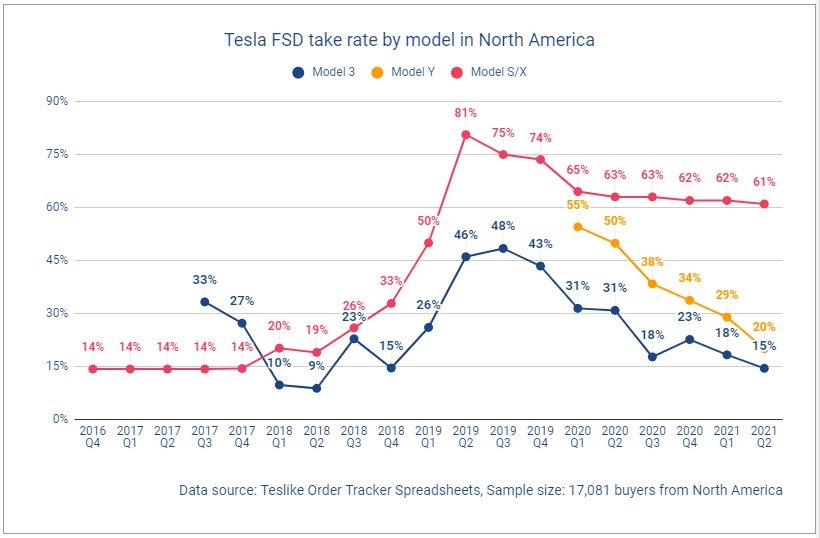 In Q4 2019, Tesla changed the price of Autopilot to $0, meaning its features (traffic aware cruise control and autosteer) were now included with each vehicle. At the time, FSD was priced at $7,000, and the combined cost of FSD and Autopilot dropped by $2,000.  However, this also changed the cost difference between FSD and EAP or Autopilot from $3,000 to $7,000. For many Tesla owners, Autopilot is quite useful and is considered an essential add-on, so when it had a price tag, it was relatively easy for buyers to justify spending $3,000 or $5,000 on it. Then, an additional $3,000 for FSD was not too hard to justify.

However, once Autopilot became standard on all Tesla vehicles, it became much harder to justify an additional $7,000 add-on for features that were considered less essential.  Since then, the price of FSD has further increased from $7,000 to $10,000, meaning there’s now a cost difference of $10,000 between Autopilot and FSD.  This is likely a key reason as to why the take rates for FSD have fallen so significantly.

In addition, it should be noted that the take rate for FSD with Model S/X vehicles has fallen significantly less compared to the Model 3/Y. This can be attributed to the Model 3/Y targeting a more price sensitive demographic. It is much easier to justify purchasing a $10,000 add-on for an $80,000+ vehicle than it is for a $40,000+ vehicle. Of course, Tesla’s sales growth in recent years has come from the Model 3/Y, thus lowering the average sale price.

Further, the global take rates for FSD have been much lower than for North America, as seen in this graph provided by Troy Teslike:

Troy states that “the FSD take rate is very low in China and APAC and they now represent a larger portion of Tesla’s global deliveries which reduces the global take rate.”  Tesla has been delivering increasing numbers in China and Europe. Unfortunately, Autopilot has been crippled in Europe for regulatory reasons, and FSD development has primarily taken place on U.S. roads. All, or virtually all, of the impressive, recent “FSD Beta” YouTube videos have been on North American roads. It is no wonder that take rates are lower overseas.

One might ask whether Tesla should take any steps to increase FSD uptake.

In fact, Tesla has started offering a reasonably affordable $199 a month subscription plan for FSD, allowing owners to try it out for just one month.  In addition, Tesla’s impressive efforts in 3D vision and labeling, neural networks, and accelerated training, as demonstrated at AI Day recently, have shown that the product will speak for itself once “FSD Beta” is polished enough to be released to the public.

The drop in FSD take rate is not as alarming as it might appear. Considering the early 2019 discounts, the increases in FSD marginal cost versus Autopilot, price sensitivity combined with declines in the average sale price of Tesla vehicles, and Autopilot/FSD performance lacking overseas, the relatively low take rate is understandable. It seems likely to trend upward soon.