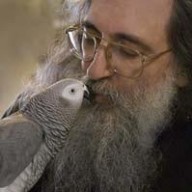 Just got back from my ABQ trip -- 2700 miles over six days. I didn't think to try the wet washcloth trick until on my way back, when I was recharging in Needles. Battery starting at 8%, outside temp was 112. Just me at the150 KW Supercharger, which started at 142 KW. At about the 25% mark it ramped down to 110, which has been pretty normal in my experience. But then, circa 30-35%, it started dropping again, rapidly declining to 56KW!

OK, I've seen that at 75% charge or when there are lots of us suckin' electrons, but never when the battery's only a third full and I've got all four bays to myself. Grrrr.

Then I remembered your trick.

Soaked a wad of paper towel in icy water from the bottom of the cooler and draped it around the handle. Within 30 seconds, the power started climbing, all the way up to 107KW. Pretty convincing.

Above 50% charge, it dropped down to the low 80's, so I resoaked the now-warm wad in icy water, put it back on the handle, and the wattage climbed up to 93 KW.

It gradually dropped from there, but it stayed in the high 80's up to 70+% charge, which was all I needed. At one point, I tried perching an ice cube on top of the wet towels, just for the heck of it, and the charge rate gradually climbed by a couple of KW.

Pretty convincing experimental results, if you ask me.

A great tip, and thanks!

I never write blogs or long posts but I just went on an amazing trip with my M3 LR RWD and wanted to share. I bought this car 2 years ago and due to work travel and COVID I only have 13K miles on the odometer.

An opportunity arose due to my friend getting married in Colorado and I’ve never been to any of the national parks in the desert south west so I decided to make a rod trip out of it!

I drove from the LA area to Bryce Canyon and stayed a few days, then to Moab UT for a night, then to Durango CO for 3 nights then home through New Mexico & Arizona. Story and Pics follow.

I left around 8am and drove to Bryce. It's a 530 mile trip and took ~9 hours. I roughly mapped out the trip via ABRP with conservative settings to get an idea of the trip and made sure to stay at hotels that had destination chargers.

My first and most range anxiety stop was at Primm, NV. The car said from the start I'd arrive at 7%. If you’ve done this drive from LA after Baker there is a large uphill incline followed by a long decline to state line. Going up the hill I had less range than the distance to destination. My wife was super nervous as was I. I drafted behind a semi which BTW I'm not even sure I did properly as I don’t know how to actually draft LOL. Anyway coming down the hill I regen’ed almost the entire way and arrive with 6% and 19m range. I should have just realized and trusted the car from the beginning. 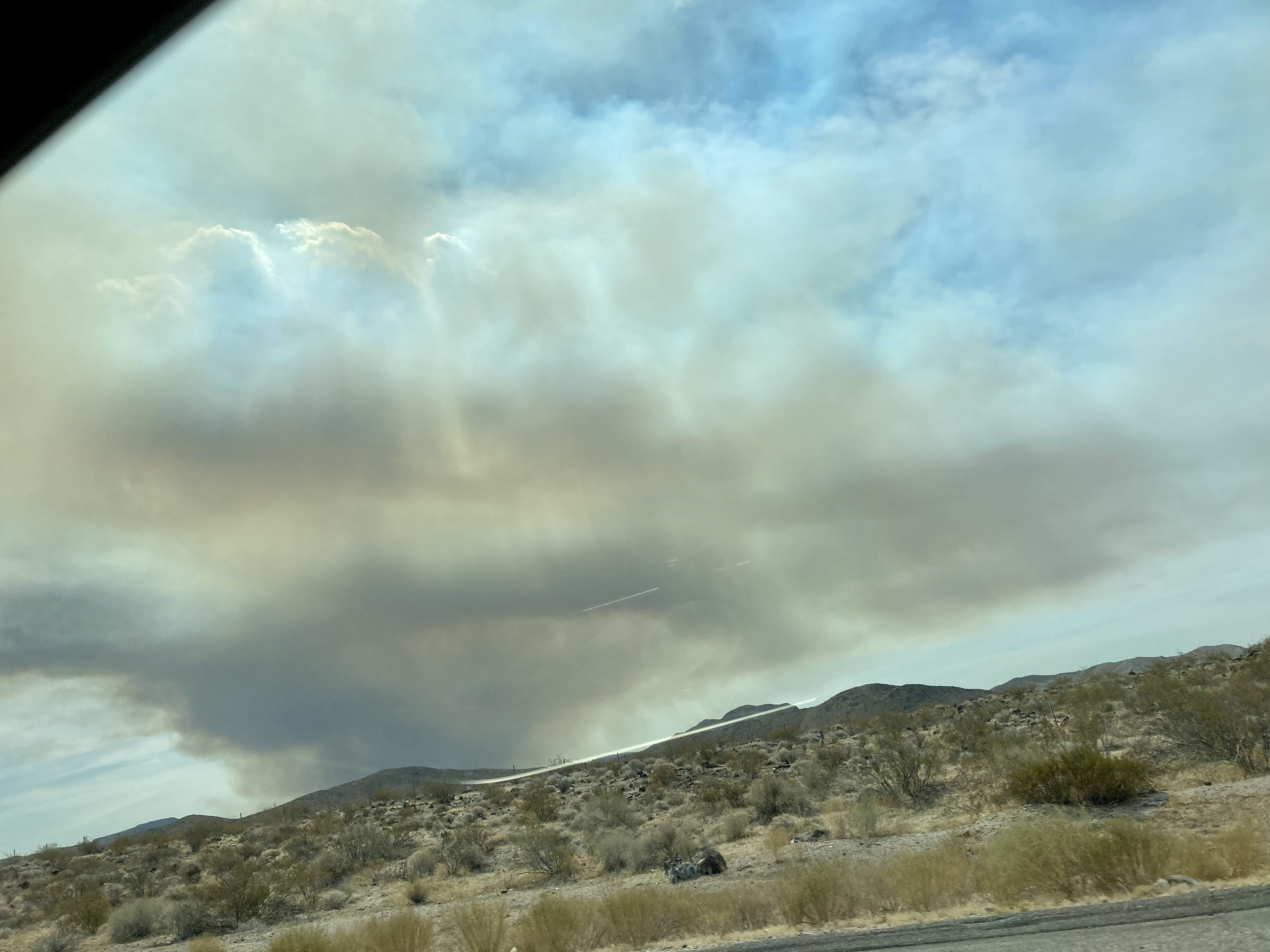 This was a pic during the moments of stress 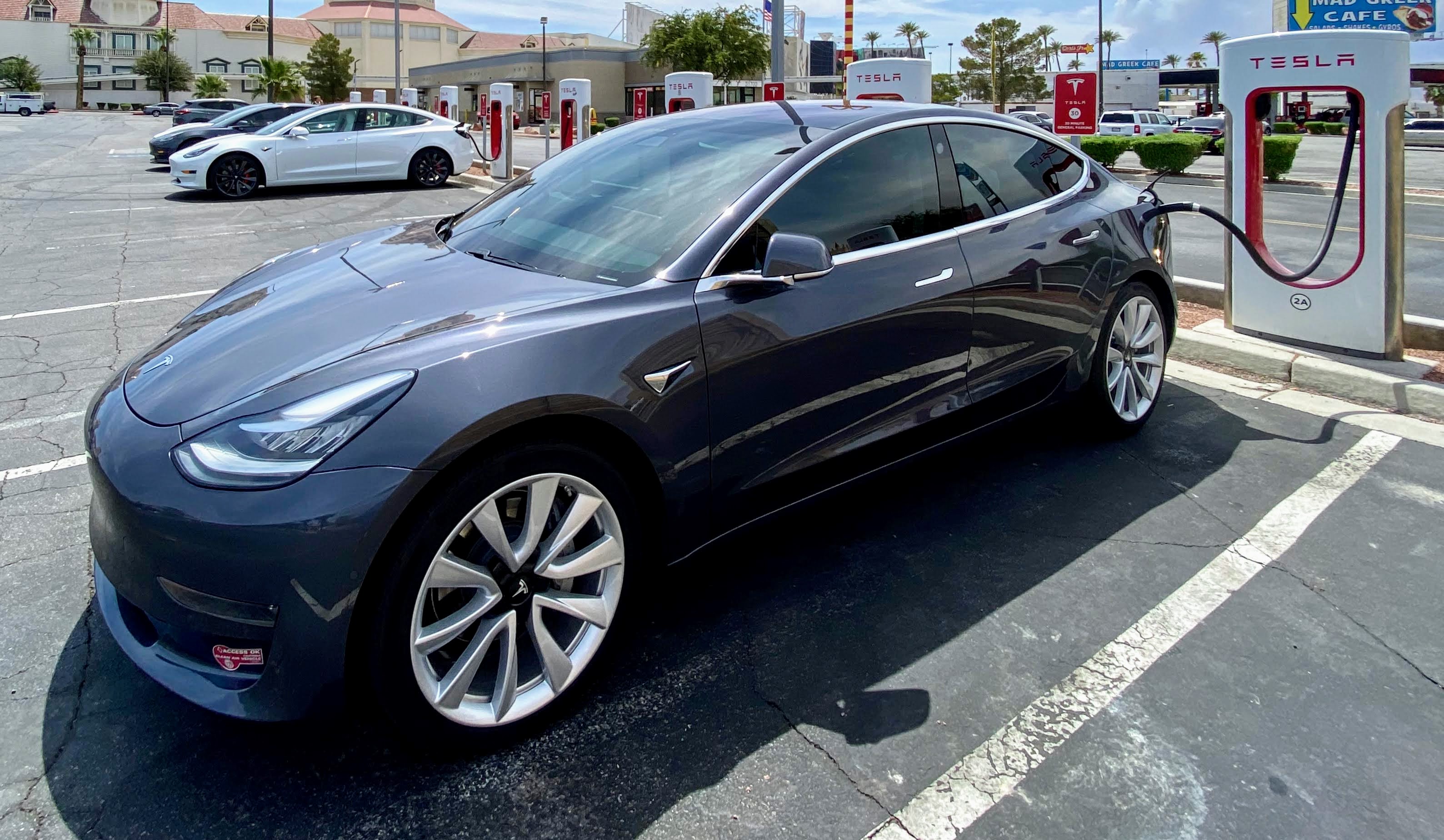 We had lunch in the casino and headed on to St George UT. Since my wife was super nervous about range from the prior stop she asked we top off in Vegas so we did. This downtown charger was in a weird place with nothing around. We stopped for 10 mins and it never mattered since we arrived at St George with ~110 of range 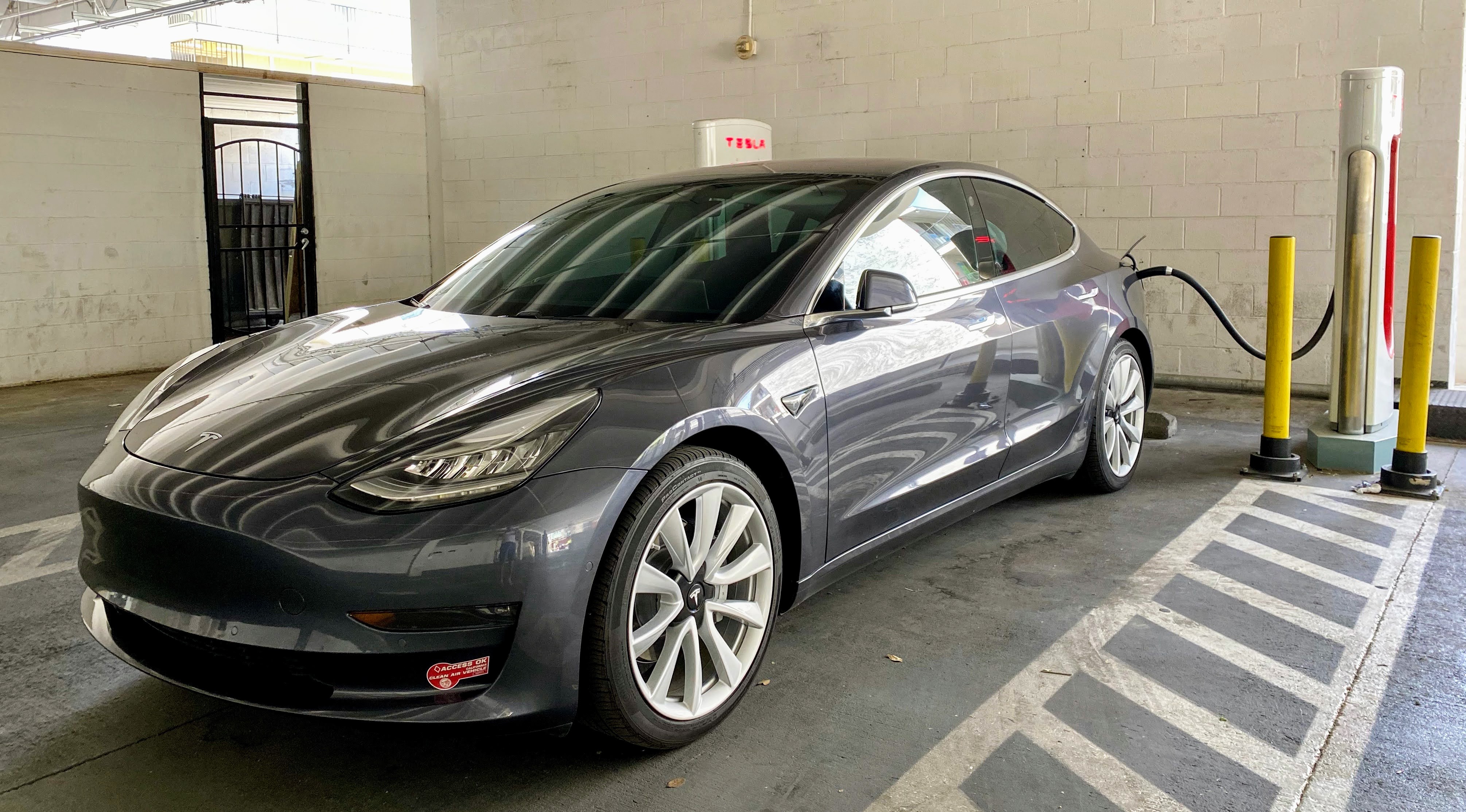 St George, UT was a challenge. It was so hot that day the heading across the NV desert my car registered in at 119F.

When I arrived in ST I had 104 miles and there was a line at the charger. I had to wait 15 mins then realized why there was a line. The car told me to charge for 20 mins but it took over an hour with ~30Kw max charge speed. It wasn’t just me as other cars were there a long as me and the line grew. I guess it was the heat...it was blazing hot although I charged in Primm at 118F and had no problems.

This was the only ‘annoyance’ in charging but we made the best of it and I made it to Bryce which is a large elevation gain with 29% SOC...i guess I waited too long in the St George heat and that slow 30Kw

I stayed at the Bryce Canyon Best Western. They had 4 chargers. No problems although one of them requires you to post in a no parking spot to make the cable reach. Bryce is ~8-9K feet so the temp was cooler. Still hot with highs in the 90s. I’ve didn’t know that any state had an 80mph speed limit but Utah does! 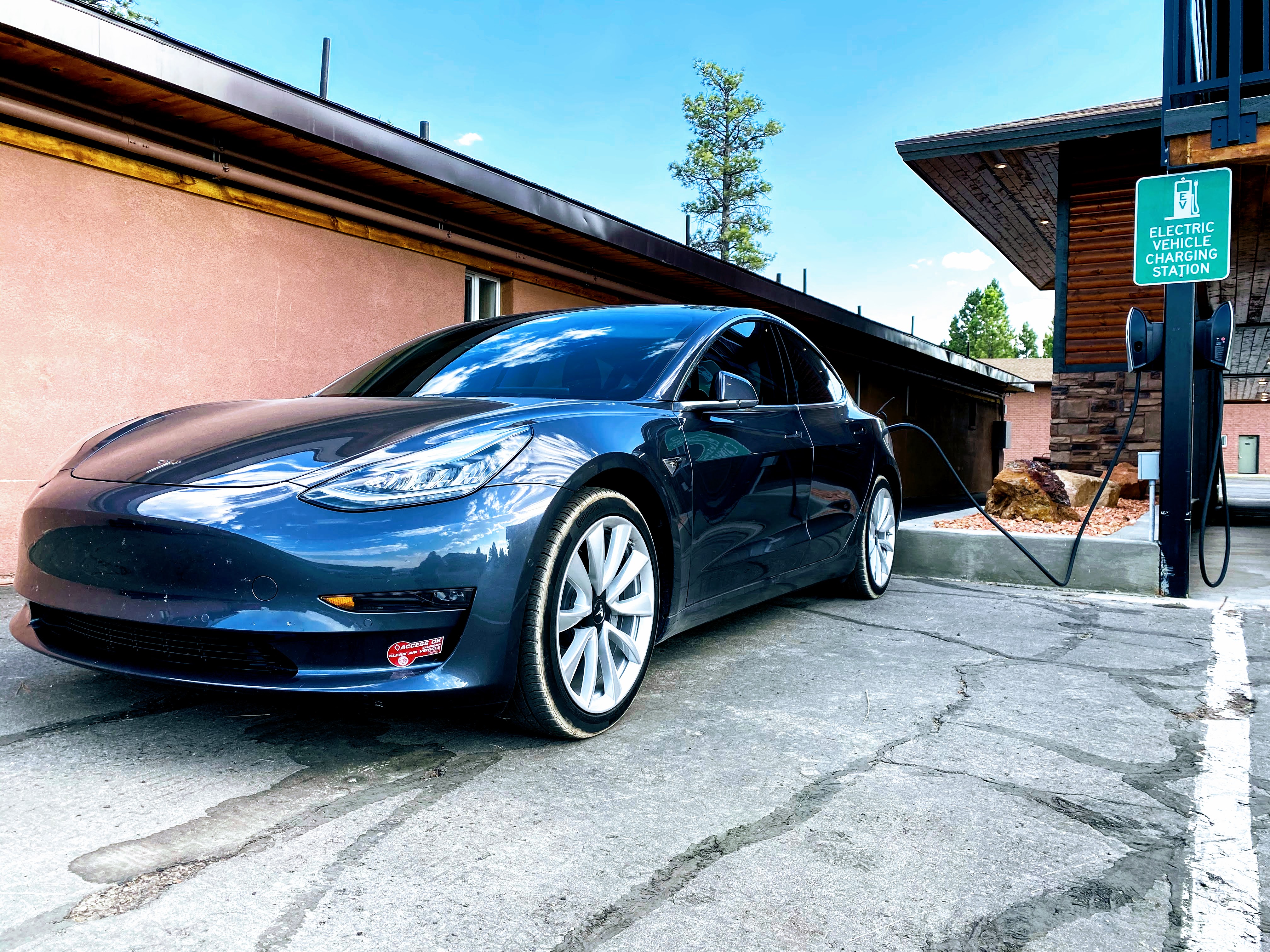 This is the part where we deviate from the car a bit. Stayed 3 days. Hiked and rode horses. Amazing place...breathtaking 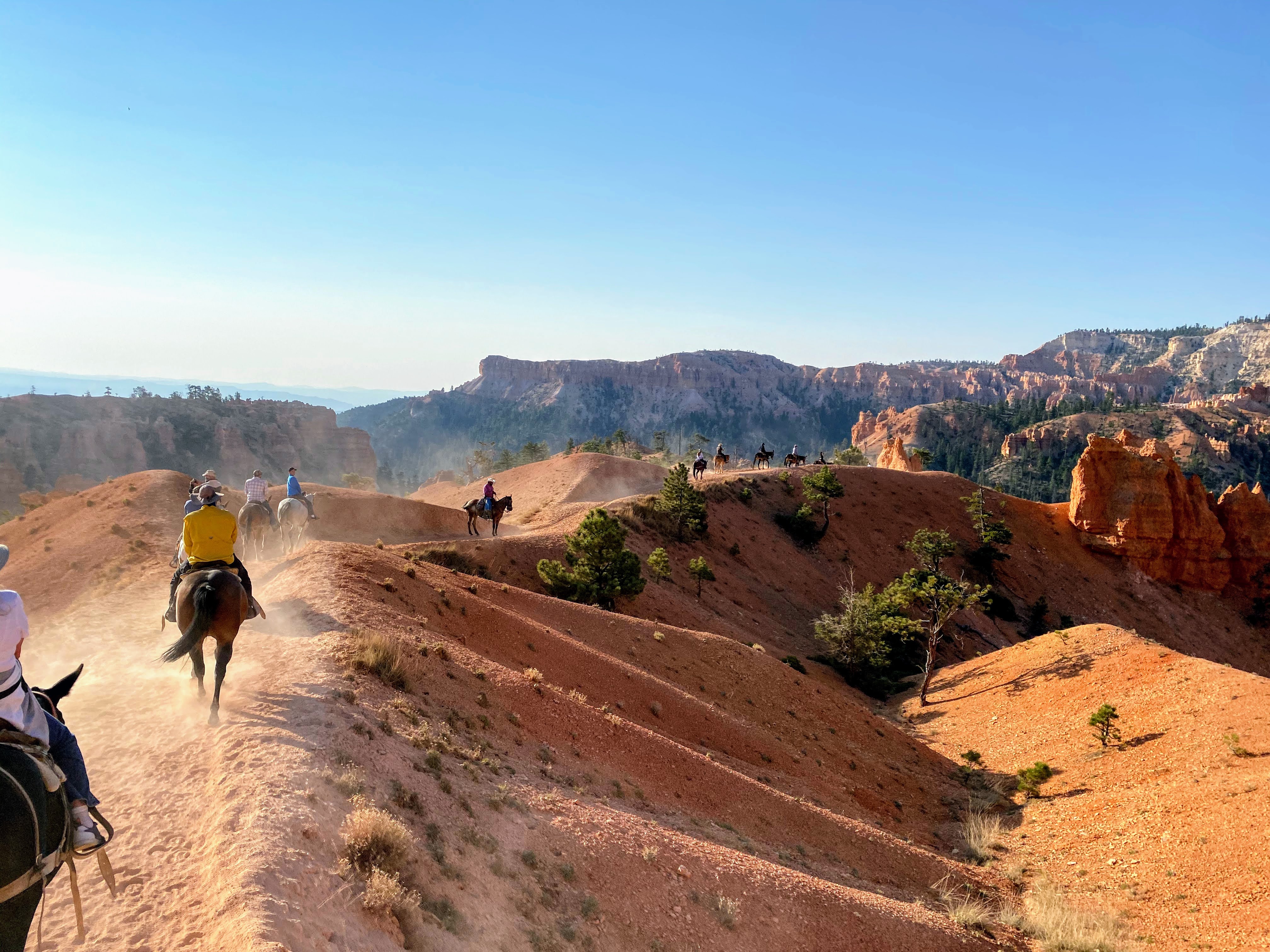 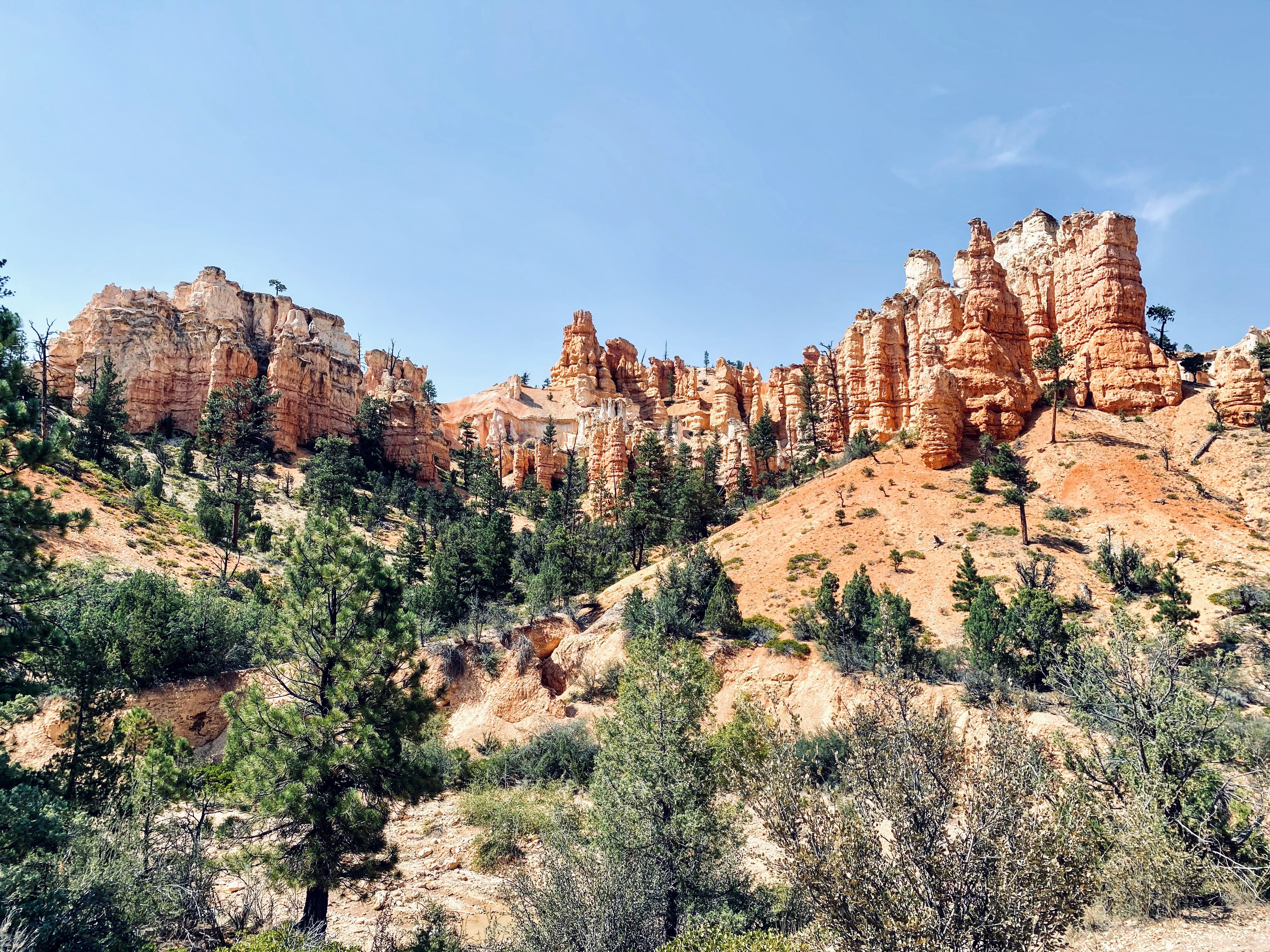 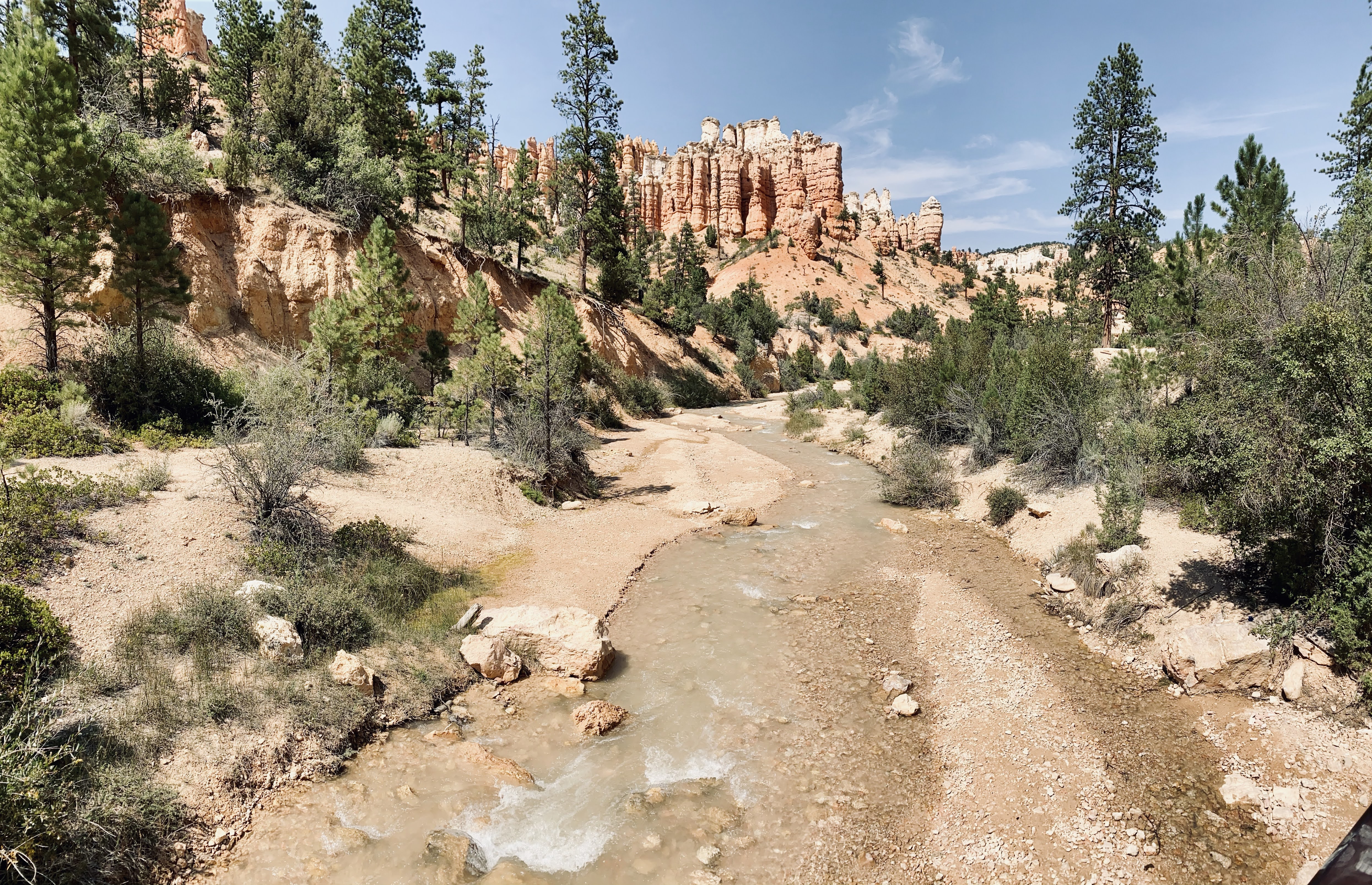 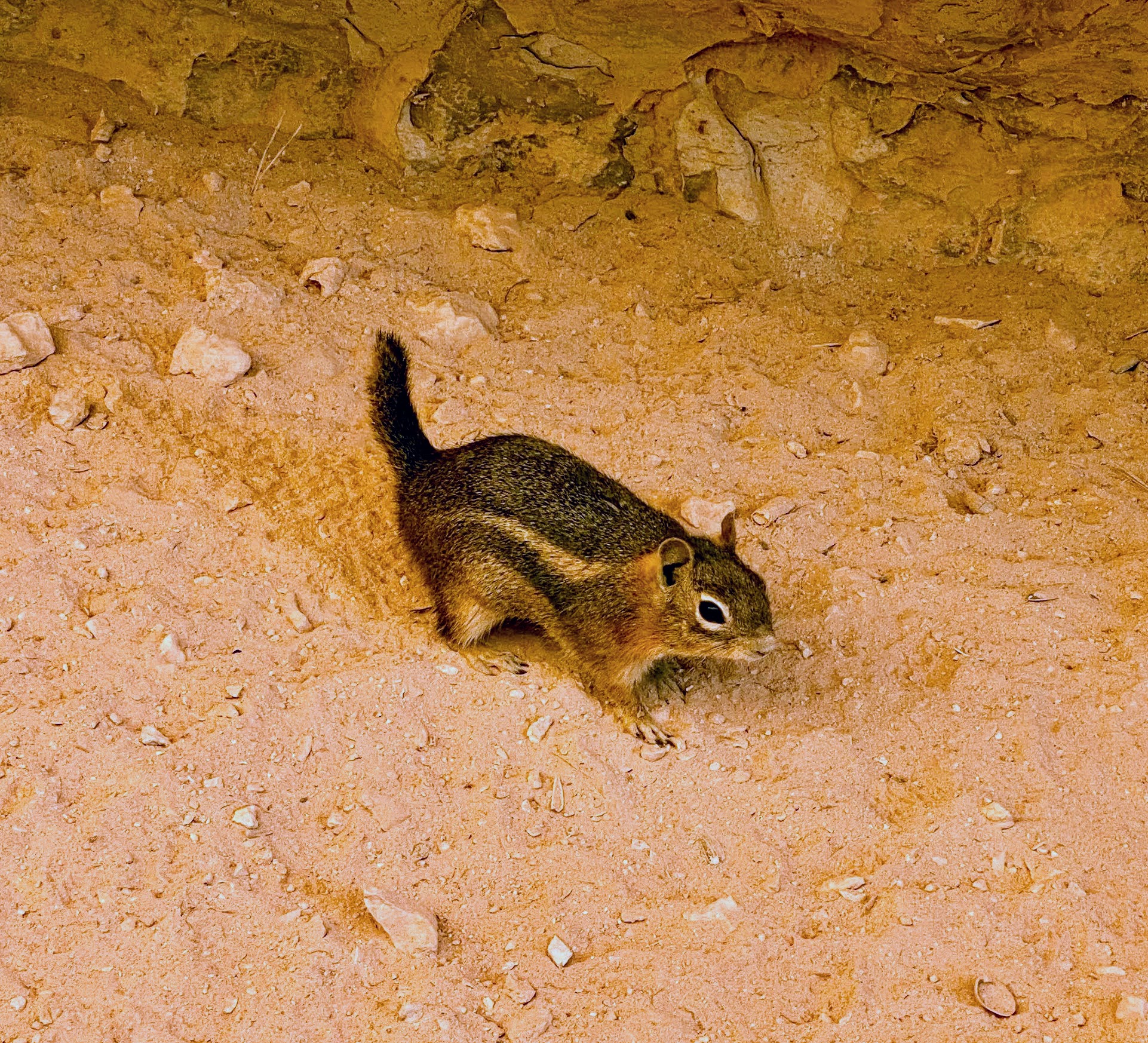 From Bryce we headed to Moab and stopped at Green River which was a great charging station with a very good local restaurant across the street.

Moab was very hot ~110F, but Arches national park was as expected. I figured I’d be able to drive through get out for a few mins, take it in, and get back into the car. I was able to do that. Camp Mode was awesome for this Yeah yeah I know there are hikes and things I could have done but I wouldn’t be in this trip if it weren’t for the wedding so the time of year and temps were just part of the coincidence of me even having driven here in the first place. 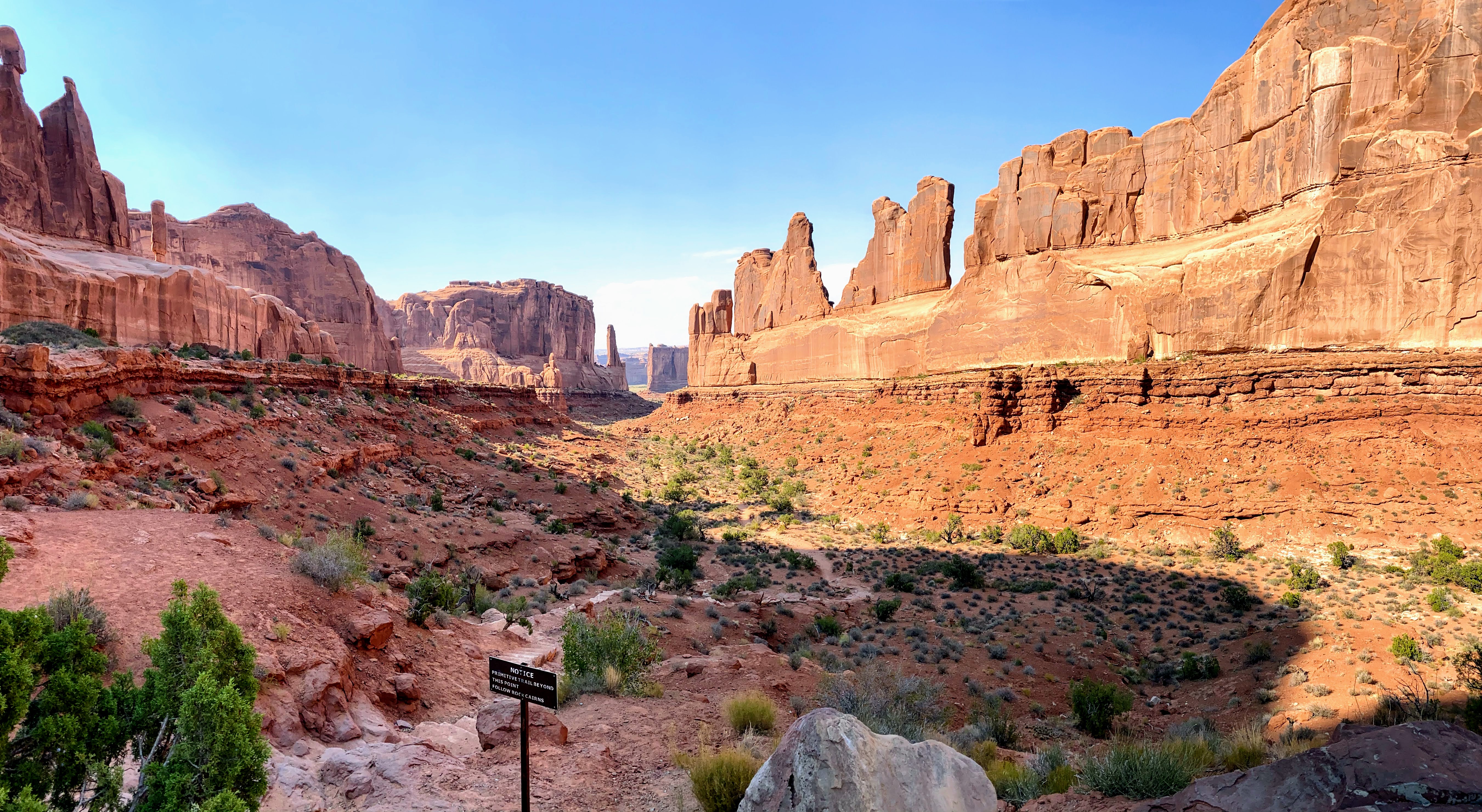 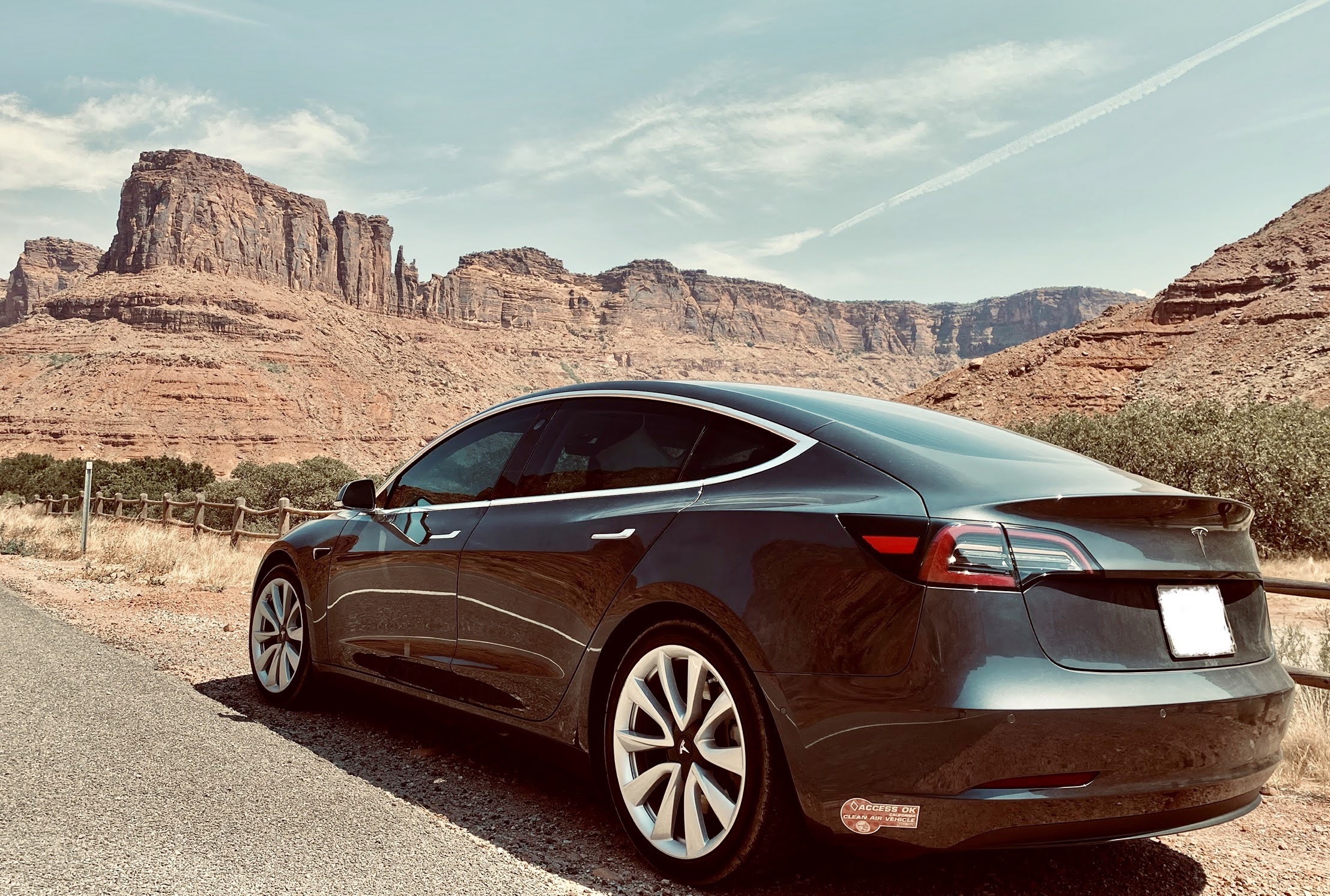 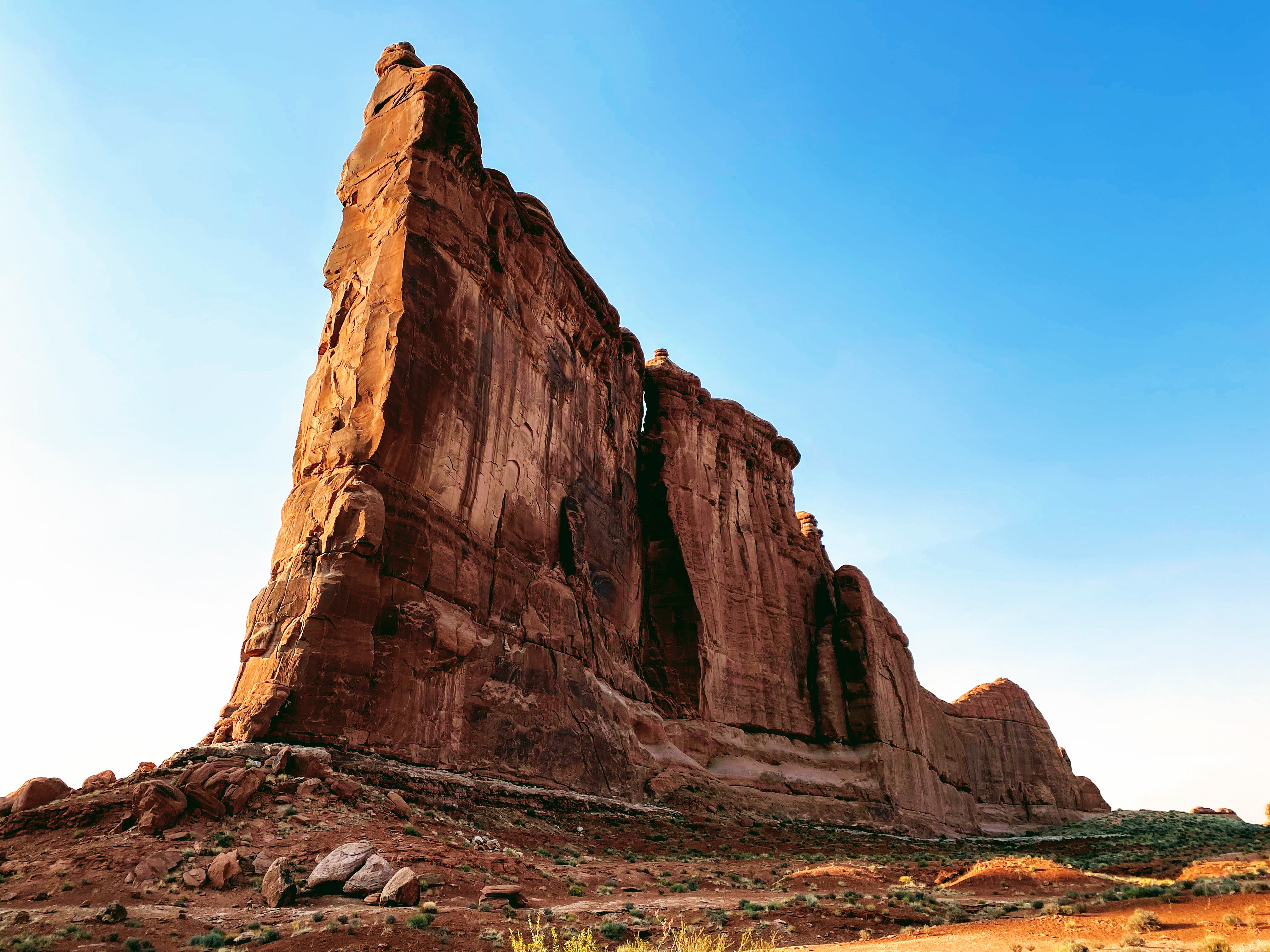 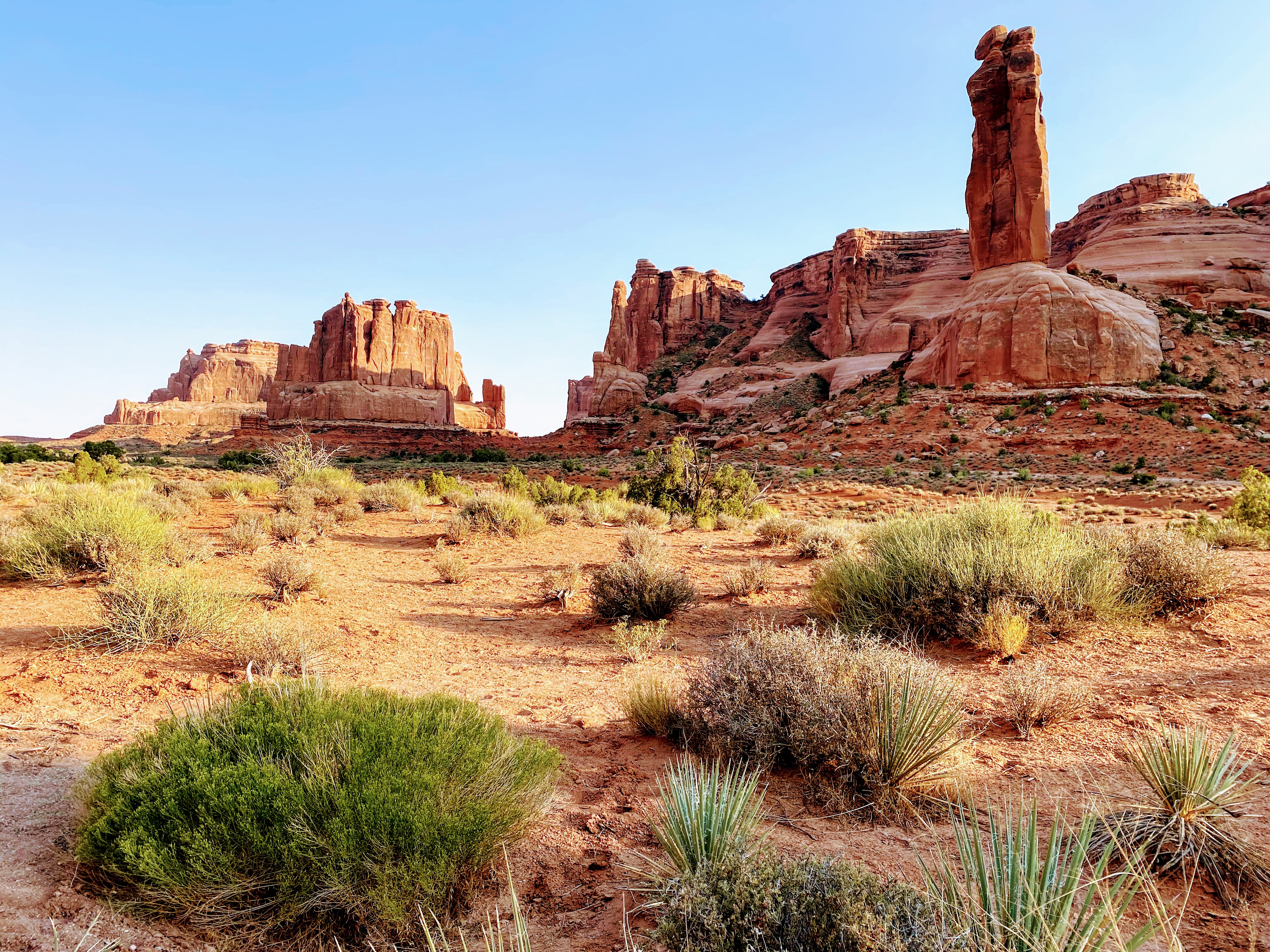 In Moab we went to a winery after an amazing drive along the Colorado river. I knew Utah had strict laws on drinking but man this was a let down. I knew something was up with the tasting was $1 per person . The drive was amazing though and that’s what matters 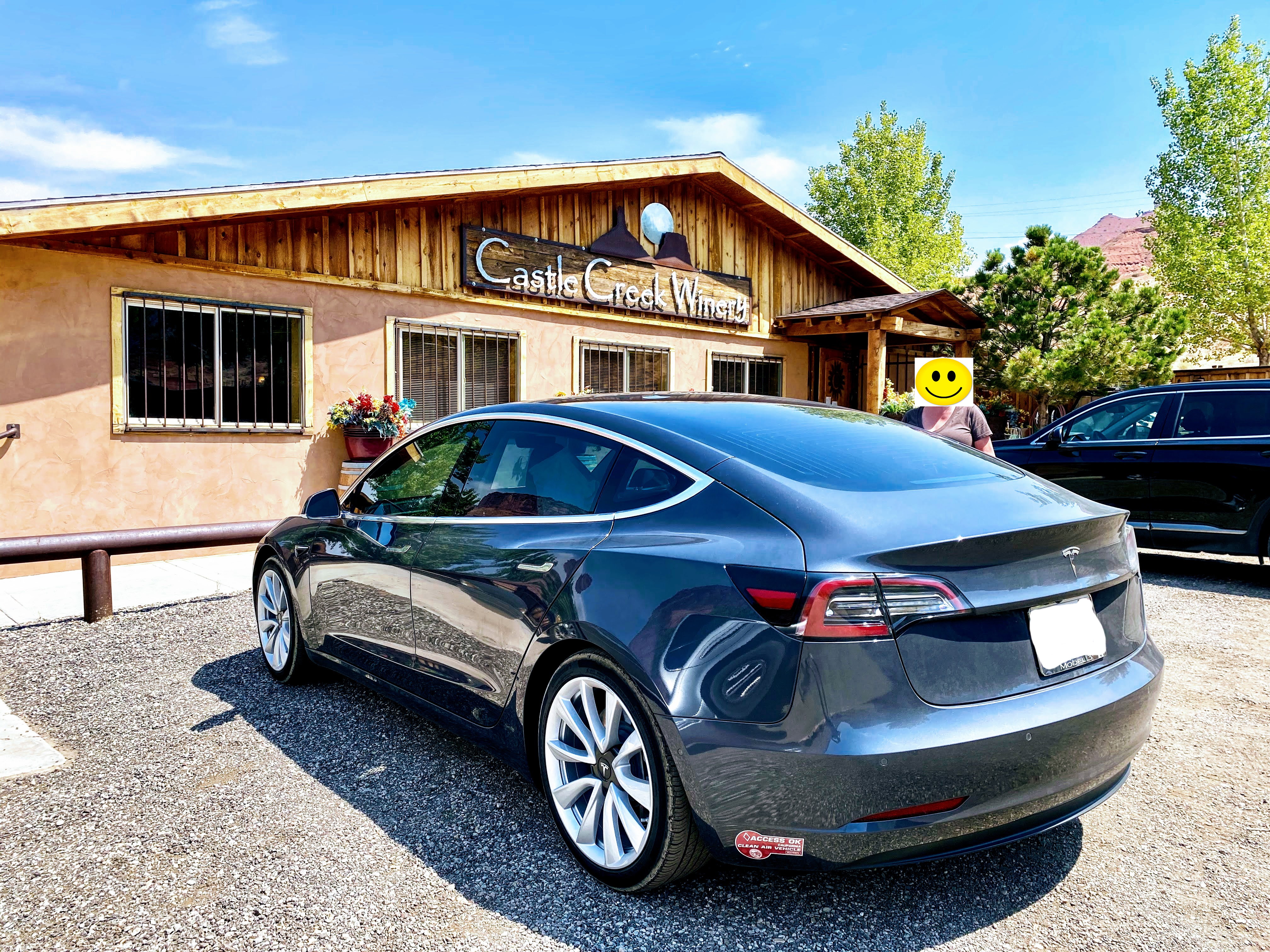 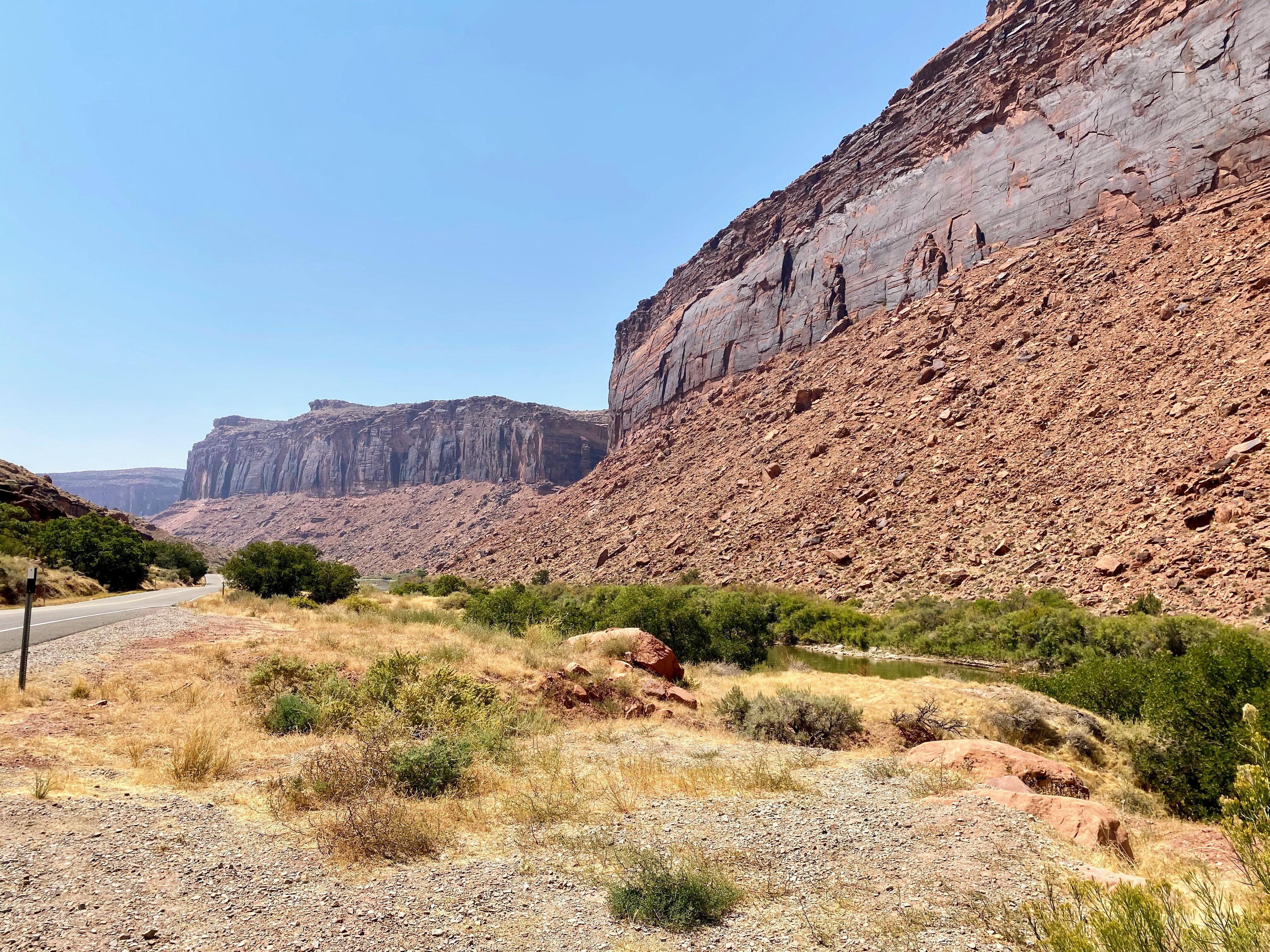 Finally, the wedding! I wish we had more time on Moab but alas we woke up and headed to Durango. In Durango our hotel had 4 destination chargers and no problems finding an open spot. We stayed at the DoubleTree which was a amazing hotel on the local river. 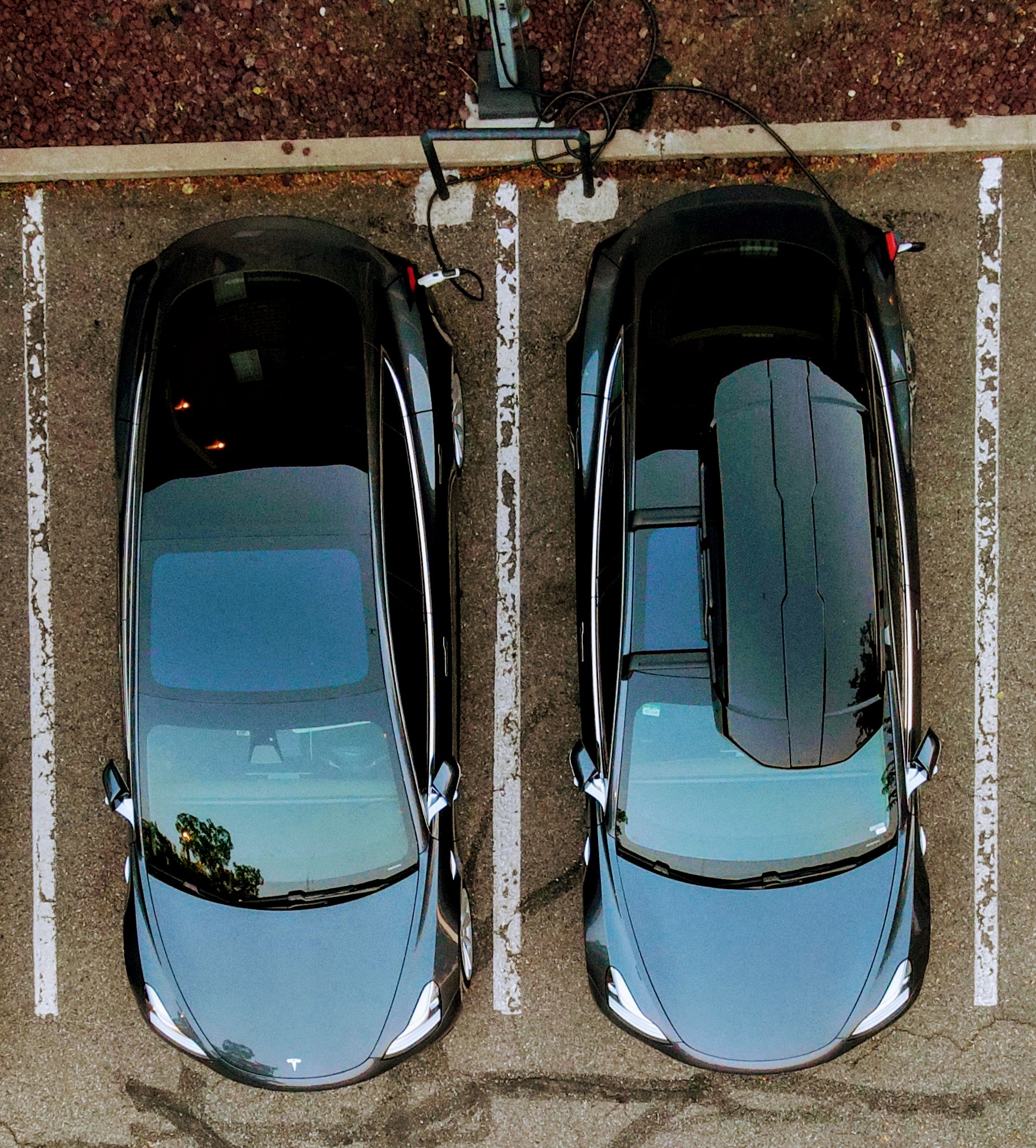 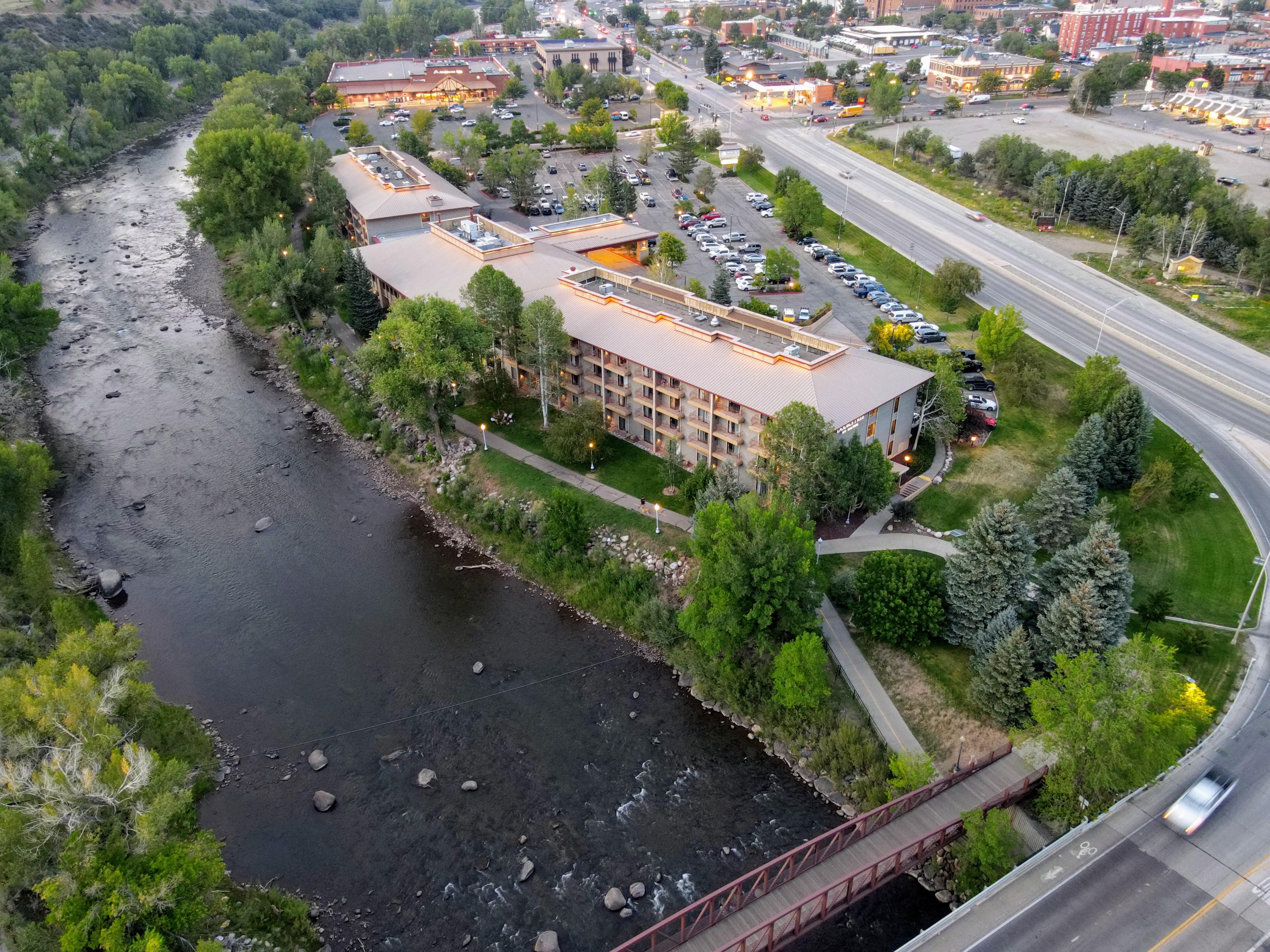 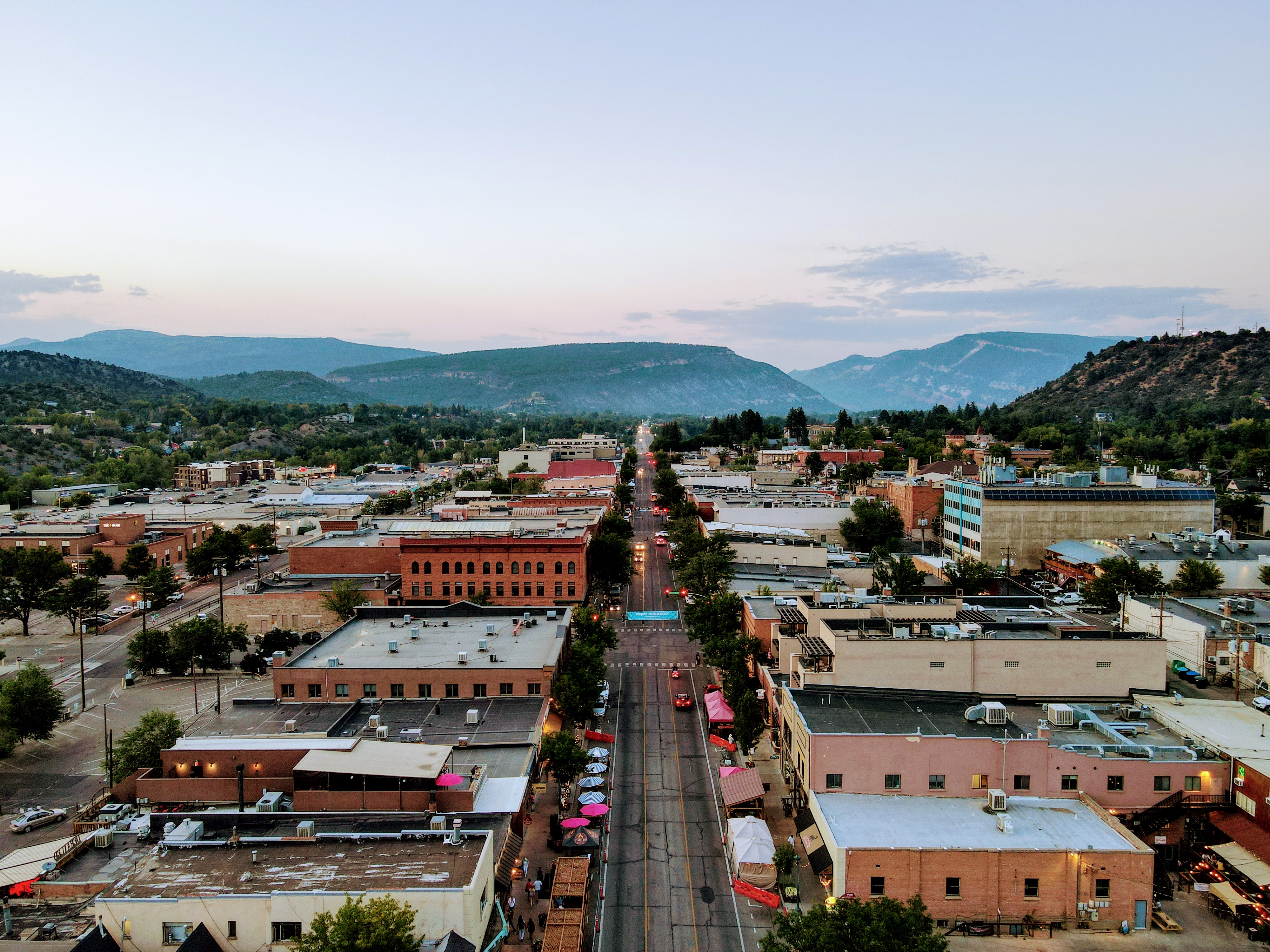 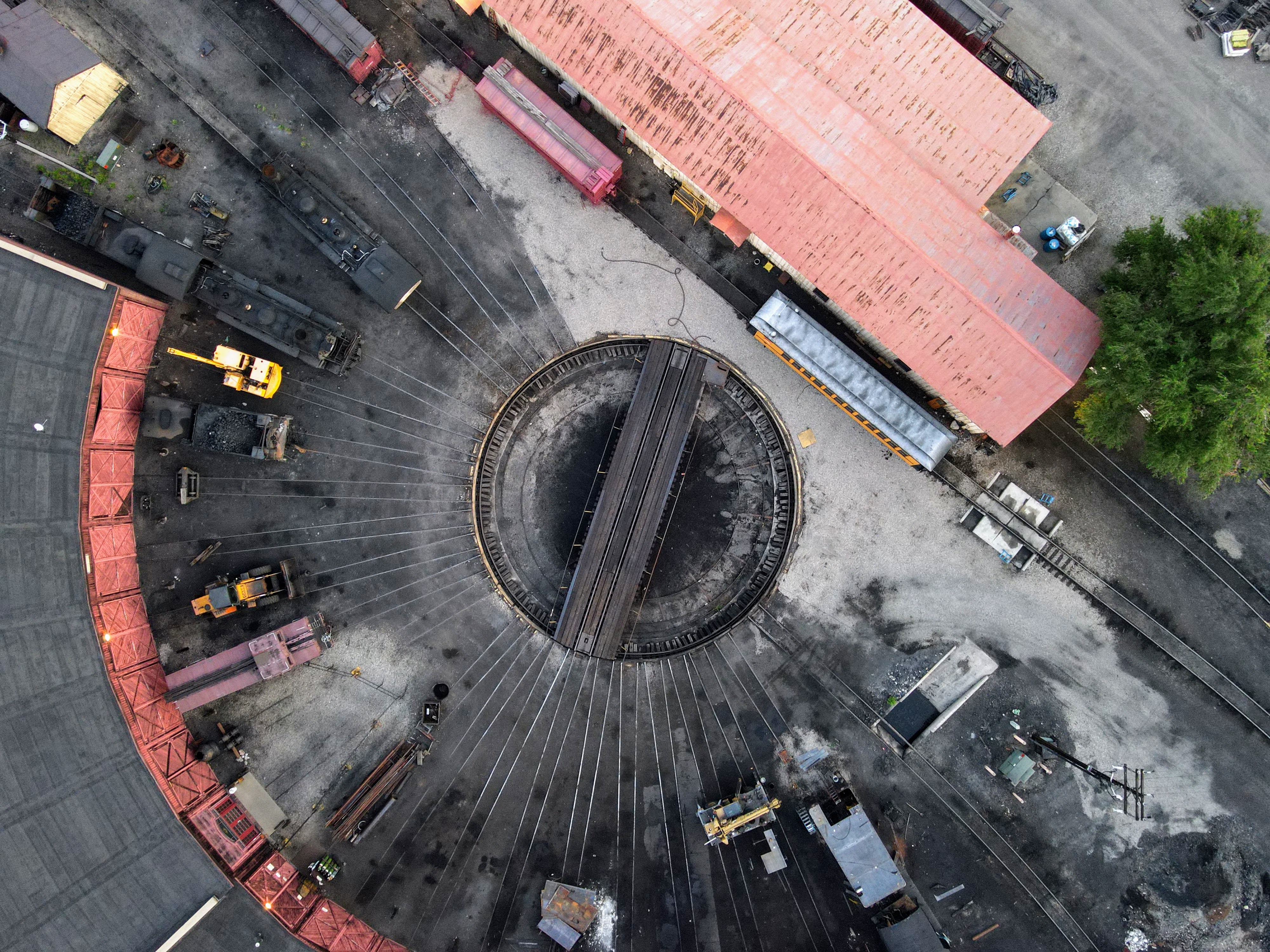 Durango was beautiful and we took this awesome historic train ride from Durango to Silverton. This ride is 9 hours pre-COVID but only 3 now due to 50% capacity and the financial ability of the entire run. It was still amazing. 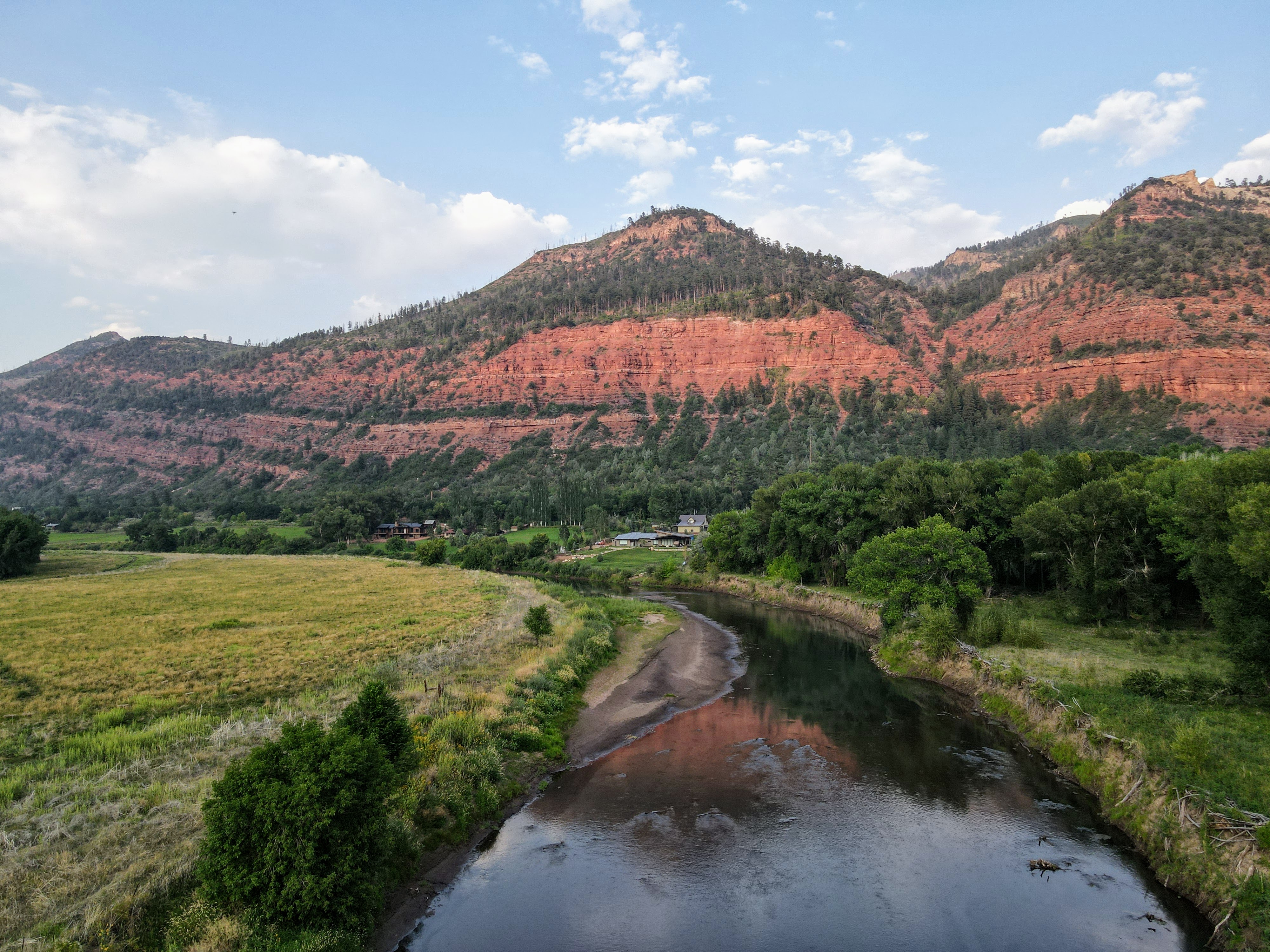 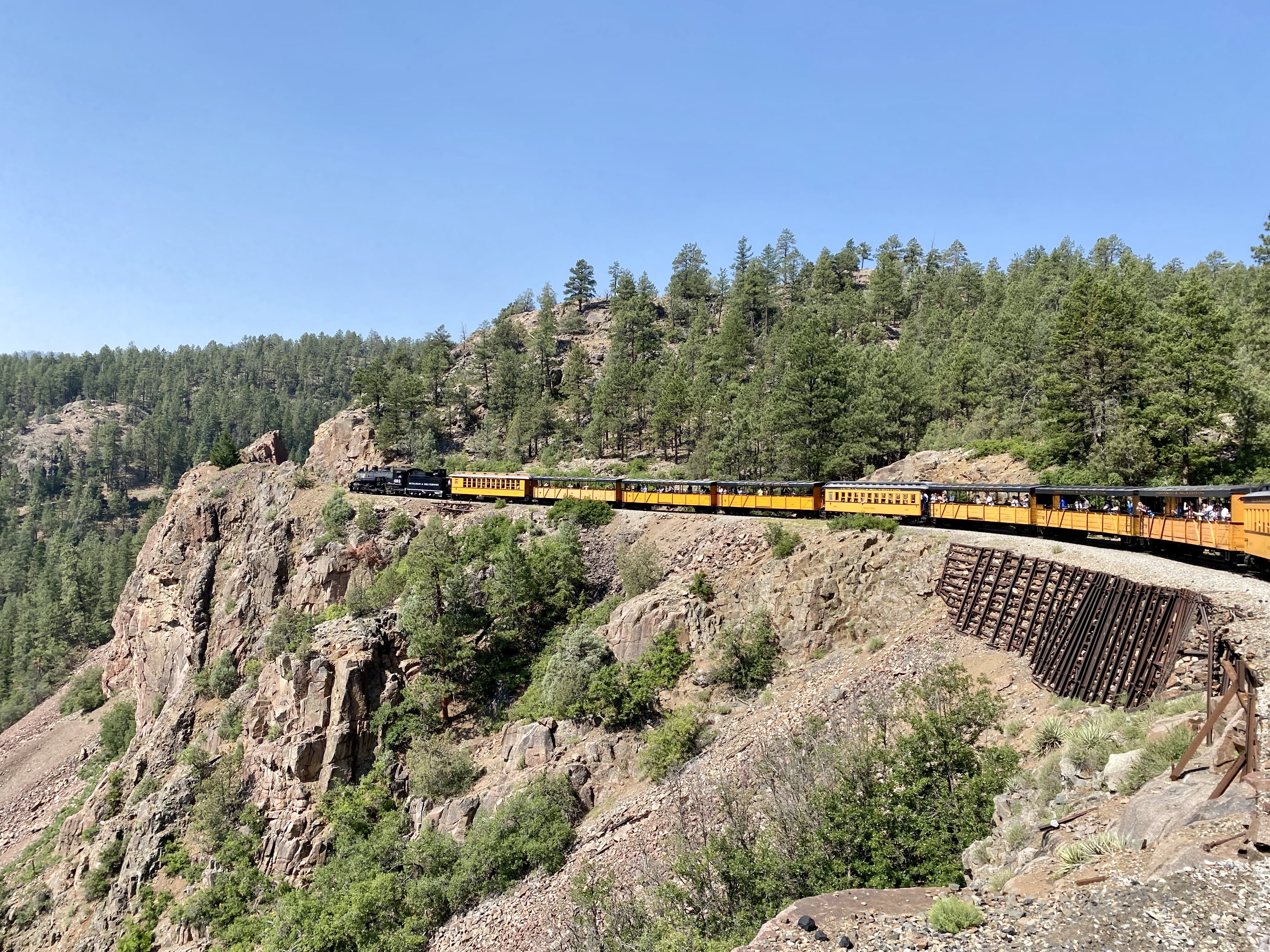 Oh and we couriered the bride’s vale all the way to the wedding! 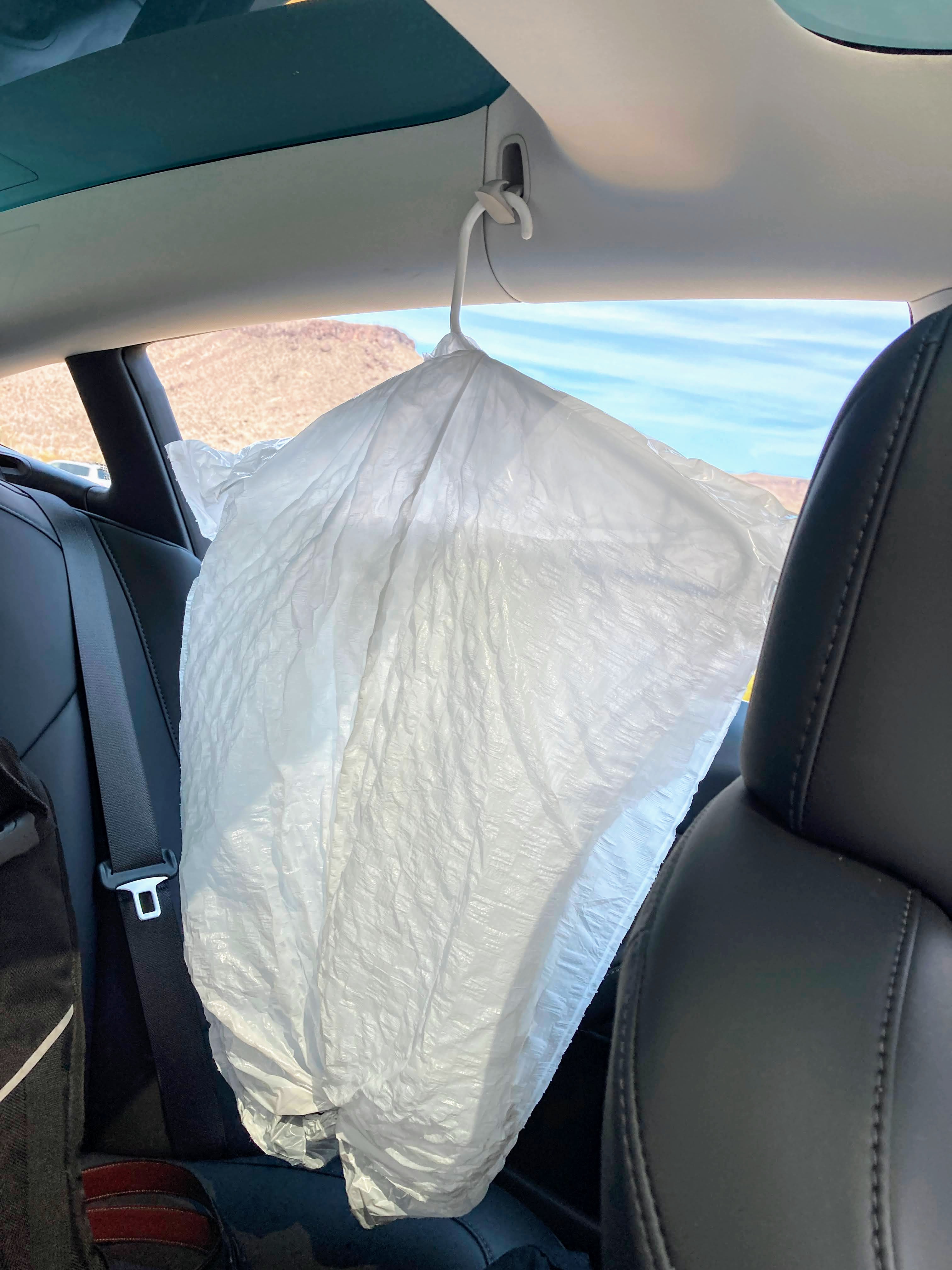 After 3 days in Durango having a great time with friends, we headed home through New Mexico and Arizona. Coming into New Mexico from Colorado put us in the Navajo Indian Reservation. Talk about a depressing place. The landscape was ugly, the roads were bad, and there were “do not drink and drive signs” all over the place including the do not enter signs all over the media separated highway which suggests a lot of people go flying down a divided highway the wrong way.

We stopped to charge in Gallup, NM which IMO is a skip. There is nothing in walking distance at all. That said charging was fast! 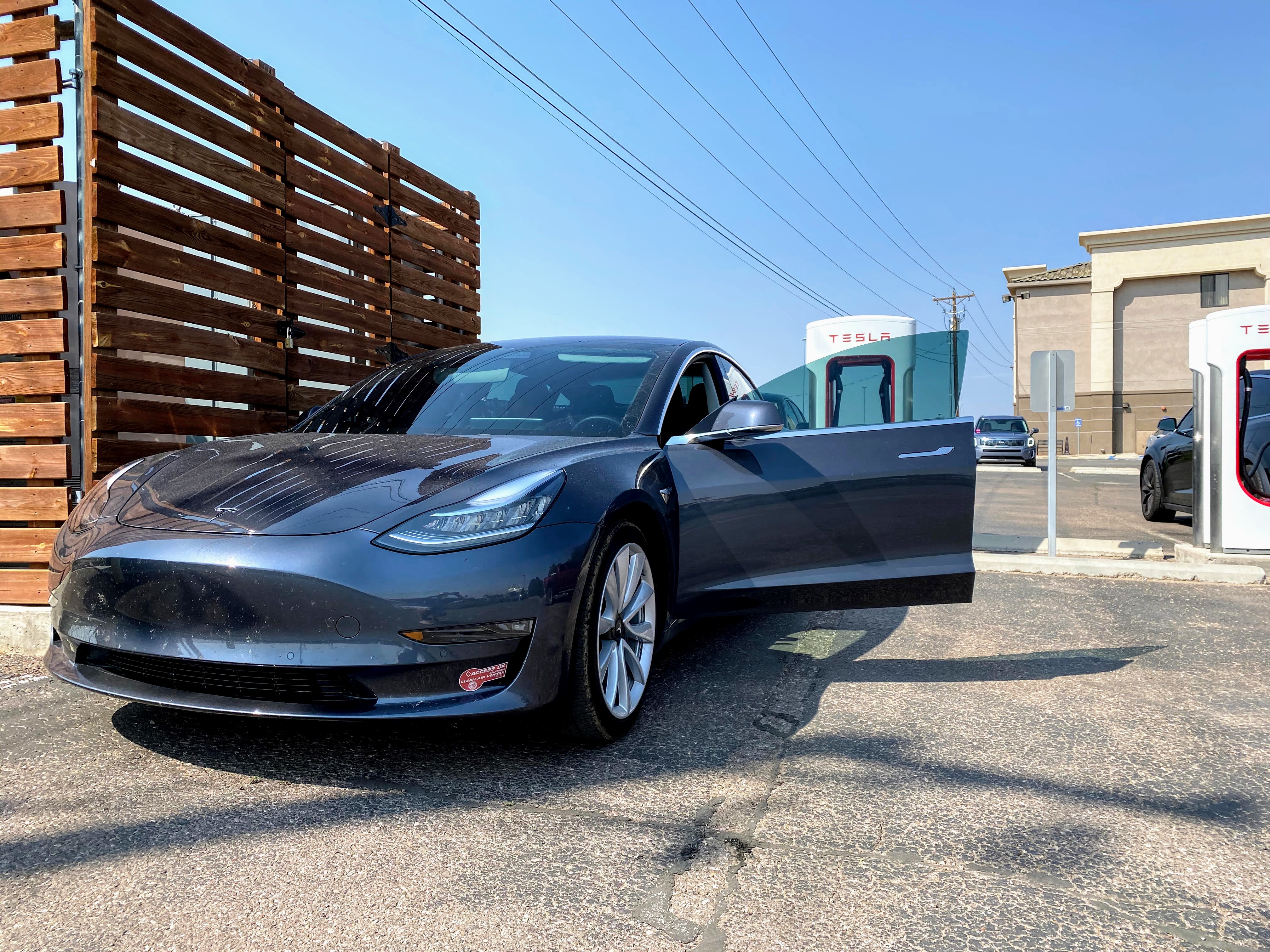 We also stopped at Holbrook, AZ. We didn’t need to charge but were hungry an there is a Burger King there. Now off to Flagstaff where we spent a night and hit local bars which was fun as it’s a college town. We charged at the super charger which is in the hotel parking lot we stayed in and then woke up to head home the next day. On the way home we stopped in Needles, CA just past the border. I suppose I forgot to take a pic because I can’t find one but it’s a good spot at a Dairy Queen which fortunately in this blazing hot place has partial shade on the chargers depending on on time of today you go. I was there about 9:30am

From there we headed to Barstow which requires a solid charge as the elevation gain is ~4K feet and it’s one of the most desolate drives I’ve ever done. There is absolutely nothing out in the Mojave desert except blazing heat and sand. Running out of charge or breaking down out here would suck. It was ~150 miles and I used 250 miles of range to achieve it but I arrived with plenty.

Charging in Barstow was nice. They have 12 stations and shade. There are several places to eat in a short walking distance. 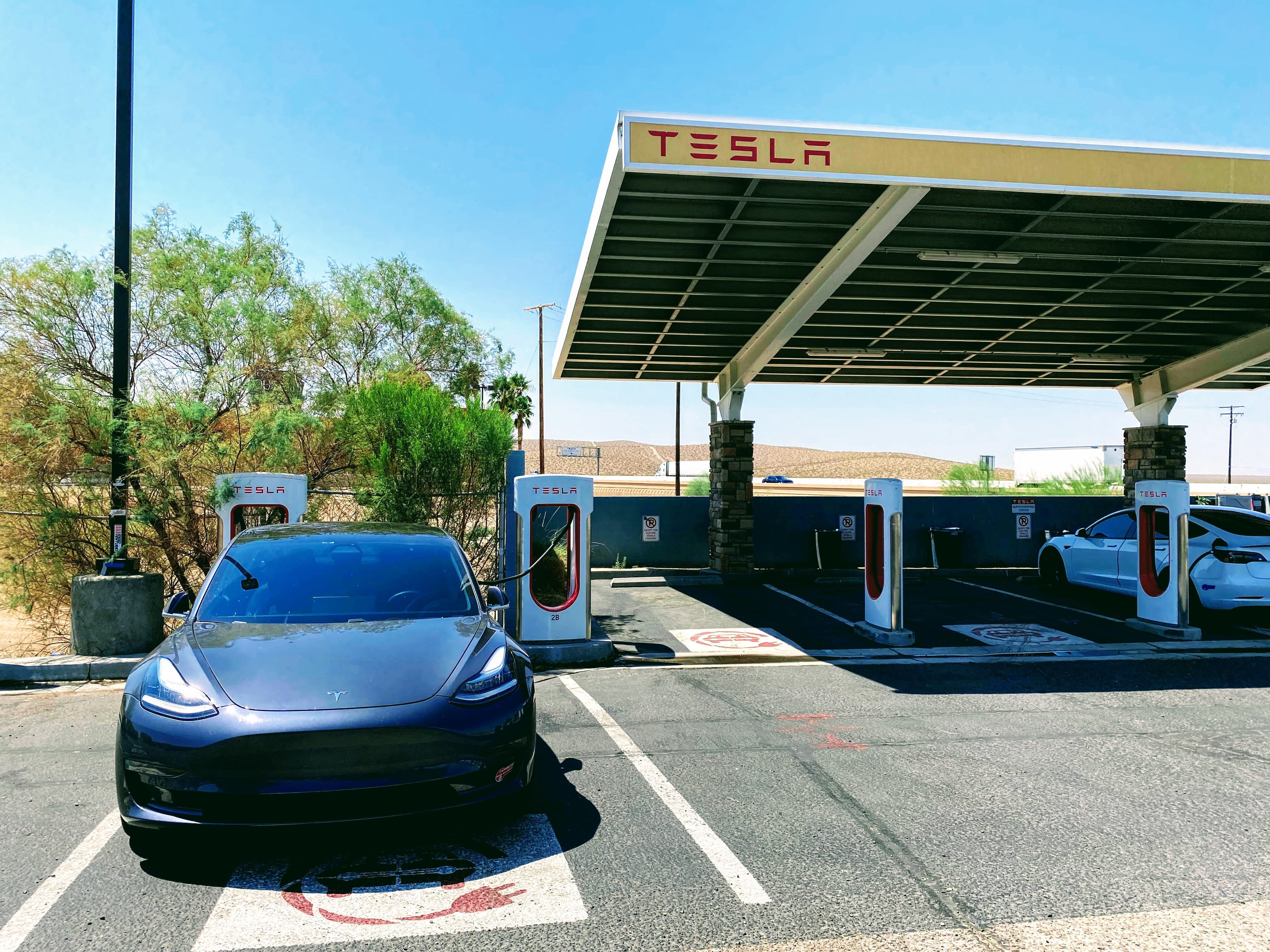 This was a great trip and while my wife didn’t really understand for me in addition to seeing these amazing sites I wanted to see what it was like to drive an EV thousands of miles and frankly as I mentioned at the beginning I’ve had this car 2 years with only 13K miles and I wanted to road trip away from this COVID isolation. The trip was amazing, the car is amazing. A few closing thoughts

1. Charging is not slower than pumping gas. Yeah filling the tank takes 5 mins, charging takes 15-30 mins depending on the situation but after driving for hundreds of miles for multiple hours getting out to get a drink, stretch, grab a bite is what I would have naturally done anyway and the time at the stop felt totally normal.

2. The issue in St George was an anomaly IMO. It was almost 120 degrees ambient and the charger was busy.

3. The drive was super smooth and EAP relieves a lot of driving fatigue. I don’t know how to explain it but using EAP makes you far less tired than normal driving. I was able to stretch my legs, enjoy some scenery, and overall feel more relaxed.

4. Lastly…..it’s amazing to me that we have technology that can hurl me across the desert in 100+ temps at 85mpg for hundreds of miles in luxury on a battery!!

I hope you all enjoyed reading this. I enjoyed writing it.
Click to expand...

What a great thread. Thoroughly enjoyed reading all of it. Many thanks to Bottomsup, Ctein (of photography fame?) and other friends who contributed.

Of course, we don't have the heat problems here in the UK. Above 80F we are all lying around like fish out of water! OTOH the SC coverage is less, especially once you get away from the south east of the country around London. Will be doing a 600 mile trip this summer and get to visit a few SC sites. Not sure I can match the photographs from these trips however.
•••