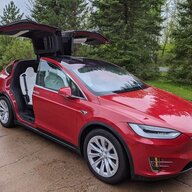 Adding lightshow to the S/3/Y is ok, but not the same as on the X. It's cool, but not AS COOL as they don't have the doors. (Lets face it, the doors opening UP are a party trick even when not in the lightshow. Always have been. And part of the reason Elon pushed for them. Part of the reason I like the X.)

When Tesla did the original show for the original X, you can tell they understood that. Timing was such that light go on-off-on-off and people are like ' wow, cool'. Then 25 seconds in, the rear doors open and you really get the WOW from watchers. The refresh show completely misses that. 46 seconds until doors open. Way too late, loosing interest by then as we have short attention spans. The whole new show is only 75 seconds. And it end so abruptly, with everything open, it seems like the intern working on this got sent home before it was complete.

New show is not the same as the original for the old X. I miss that old one. Good the S/3/Y have something, but new show not as good for refreshed X owners as OG show.

What to do? Luckily there is the Custom Lightshow option. There are sites where you can share your show. Unfortunately, they seem to be for S/3/Y as yet to find a good one that moves the FWD. So I took matters into my own hands. I took an existing custom show and fixed the audio a little and added door, liftgate, mirrors and chargeport movement. I open the FWD early on. Probably too early for maximum effect. But once open, I wait to do the DANCE mode until the music is dramatic and supports it.

The downside of this particular show, the base show's lights that I based this on don't always match the beat very well. I'm thankful someone did that show originally, so I don't want to cut on it. The problem is the XLIGHTS editor is graphical but SLOW to work with. I had problems getting the DANCE mode to even work on the doors and it doesn't work on the chargeport or mirrors like its being told to do. While researching how to use Xlights, came across this: 1 minute of good show is 20 HOURS of work. I'm not going to that the time and change the lights to match the beat, as I just wanted the DOORS to move and I got that.

I shared the show on a teslalightshare io site so others with an X can get their X to dance. There are lots of little things that have to be right (can't use the Tesla USB-A stick, have to place on your own USB-C in the console, formatted right, in right directory location on stick with right name, etc).

T
Model X Refresh - Fastest way to you lock door inside the car?