This is being written from the perspective of somebody who experienced a 5 month change in software capabilities, virtually within the space of an hour. I assume that most people here have been updating as each software version has been released so this is for anybody who's been in my position of not wanting to, or not being able to, update.

TL;DR version: Updates generally positive but still needs work in places. If you've been cursed with failing software updates, ask Tesla service for an OTA SD card reformat and see if that fixes it.

I had been stuck on 2018.28.1 since about the end of July. I've only received that one update since getting the car. All of that time was essentially intentional; I did not want or need any updates so I really wasn't concerned that I wasn't getting them as they were released. That changed when I bought a fob and needed to update. I had requested that Tesla push out the latest software to me several times since December but the updates failed to install. I have also recently added a Wi-Fi repeater in my garage as the signal out to my driveway has been pretty weak. As it turns out, I might have had an issue with the car in that the Sunnyvale Service Center performed an over-the-air reformat of the SD card before the last update (2018.50.6) was finally installed. At least that's what they told me via email, just prior to coming in for a service appointment. Note that I had no other detectable problems with the car. Everything seemed to be working as it should. I should also note that I did not purchase EAP with the car but added it on about two months later. This would have been after getting the 28.1 update. Don't know if these two things are connected; just FYI.

With only a couple of days of using the new software under my belt, these are the things that have improved (+) or taken a step backward or hasn't been realized yet (-) IMO:
Overall the pluses outweigh the minuses; I'm not counting the number of instances but more on a weighted basis. The improvements, like being able to use a fob, is a significant advantage despite the cost and button usage. That's about all that I have now. I'll update if/when I find other things that have changed for the better or worse.
Reactions: MarkBrokeIt 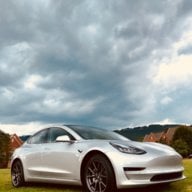 RayK said:
(-) There should be an audible warning if the turn signals are activated and there's something behind and along side of me. Invoking the alert with the turn signals seems to me to be a very logical connect for a cause-and-effect acknowledgement of the danger involved. Plus it might get people to use their blinkers more often.
Click to expand...

Ask and ye shall receive. This feature is part of the first 2019.xx.xx software update that has started to be pushed.
Reactions: wupcwww and woodisgood

M
Anyone have the driver door "auto present", or is it "auto open" just stop working?