I believe this started when I jacked up my car and swapped my wheels, but I can't fathom how a wheel swap would cause this.

When I come to a stop, there is a subtle "clunk" sound, seemingly as the torque of the car coming to a stop shifts something forward in the front right wheel well. Then when I go, there's a corresponding chatter, as though whatever it is shifts back. There is also an intermittent (>50% of the time but not 100%) metallic sound from the same wheel when I turn the wheel while stopped.

It almost sounds like there's some loose eccentric bolt, e.g. for caster adjustment, that's allowing something to shift in there. I had the car aligned at a service center and there was no change (I had not asked them to look into this since I hadn't correlated it yet). So I don't think it's actually the caster adjuster.

Any suggestions on things to check, or should I just make an appointment and cross my fingers?
••• 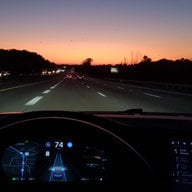 Hey, I hear that too! Do I have to fix it? It doesn’t bother me too much but if it is an indication or worse to come then I will get it looked into.

Is it a suspension thing?

For what it's worth, I finally got this creaking/clunking sound addressed by the service center - apparently it was loosened axle nuts. They replaced the washers and nuts and the noise is gone. Hope this maybe helps someone else with a creaking sound on forward/back or accel/decel transitions.
•••
M