The third SuperTruck project, focused on zero-emission trucks, will fund both medium- and heavy-duty trucks across duty cycles and vocations, from long-haul and pickup and delivery to refuse and tow trucks.

The Department of Energy (DOE) has announced the availability of $100 million over the next four years to validate electric truck technology through a third SuperTruck project, this one focused on zero-emission trucks.

The diesel-based SuperTruck programs, which began in 2009 and 2015, respectively, were deemed a success by the DOE. During an April 15 call with trucking industry representatives, Secretary of Energy Jennifer Granholm said SuperTruck 3 will “push the envelope even further through the electrification of the vehicle, and hydrogen and fuel cells.” The funding is available for both medium- and heavy-duty trucks across duty cycles and vocations, from long-haul and pickup and delivery to refuse and tow trucks.

The transportation sector as a whole generated 29% of U.S. greenhouse gas emissions in 2019. “To reach our goal of net-zero carbon economy by 2050, then we absolutely have to figure out a way to drive those emissions down,” noted Granholm, the former governor of Michigan.

The money has been authorized by Congress, according to Granholm, though the House Committee on Appropriations will have the final say. Another $63 million is earmarked for the “Low GHG Vehicle Technologies” funding opportunity to improve current engine technology and build out and increase access to passenger electric vehicle charging infrastructure.

This funding will help truck makers and fleets understand which of the nascent technologies associated with electrification will work on the road, while also serving as “a powerful salvo in our war on the climate crisis,” Granholm remarked.

The DOE, and Biden Administration overall, view climate change as America’s biggest enemy in the coming decades and have declared war on it. Consistent messaging and several actions — from the money allocated to electric vehicles and clean infrastructure in the $2.3 trillion American Jobs Plan to President Joe Biden issuing Executive Order 14008establishing climate change as a national security threat — indicate as much.

“We cannot delay in waging a full-out war on the climate crisis,” Granholm affirmed.

Because the trucking sector accounts for 73% of domestic goods moved, it’s a logical space to establish a beachhead. And the SuperTruck model has performed admirably in achieving efficiency milestones.

“Within seven years, Volvo, Daimler, Cummins, Peterbilt, and Navistar had blown past our initial goal of 50% improvement in fuel efficiency,” Granholm said of the first SuperTruck, adding “all five SuperTruck 2 projects are on track to hit their goals of more than doubling miles per gallon.”

Raising the bar for efficiency​

One piece of tech they both use is the Merlin Solar photovoltaic panels on the cab roof. On Morrow’s truck, the solar system feeds into an Idle Free Series 5000 electric auxiliary power unit (eAPU), while Reed’s Freightliner Cascadia Dual HVAC system receives that system’s renewable energy. Both say their idle time has been almost entirely eliminated.

“When we are parked at a shipper or receiver and it's 100 degrees outside, we don't have to idle the truck,” Morrow said. He added the eAPU also runs quieter than a diesel one or idling the main engine.


Reed pointed out diverting the load from stored energy on truck battery to the 500-W solar plant on the roof also extends its life, which is another win for the fleet and environment. 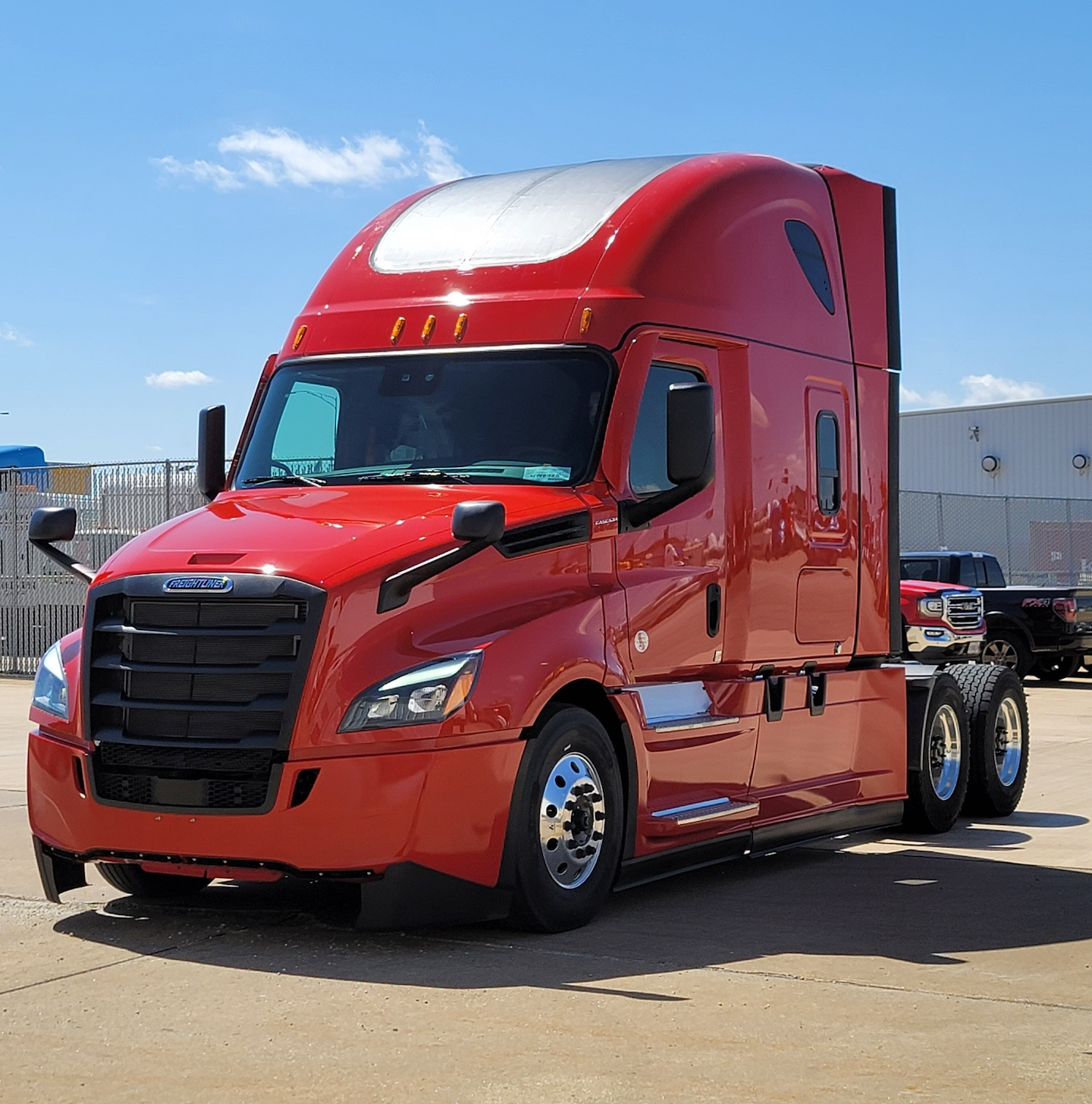 A Freightliner Cascadia equipped with Merlin Solar PV panels, which can reduce idling by drawing power from the sun.Photo: Merlin Solar


“We're not burning diesel fuel, while we're sitting there staying comfortable, and we're saving the environment by not having to dispose of as many batteries,” he said.

Morrow, who is also Ploger’s VP for fleet procurement, also mentioned how lift axles are a good way to achieve more efficiency on the road. Lift axles are installed to disperse weight more evenly when hauling higher payloads and can raise up when running lighter.

“It's a great way to save energy, simply because in the typical American duty cycle, we're not always hauling 80,000 lbs.,” Morrow said. “And oftentimes, we don't need to have all those axles on the ground, which creates an energy drag on the truck.”

From a tech standpoint, Morrow said in-cab coaching devices are “[some] of the best tools in the industry right now.”

He said because driver behavior “can impact fuel efficiency in excess of 30%,” a fleet can improve efficiency by measuring drivers’ real-time performance and using data to show them where they can improve.

“Being able to get instant feedback in the cab and coach the driver let them know if they're doing things right, especially as technology gets more and more advanced,” Morrow said.


And it helps drivers remain vigilant when swapping truck or component brands.

“Sometimes there's actually differences between certain manufacturers and trucks and how they need to be driven, and these in-cab coaching devices really help the driver achieve maximum efficiency,” Morrow said.

Reed noted that safety technology such as forward-facing radar can increase efficiency as well as safety.

Tests showed that the system, which adjusts following distance based on radar, helps keep a consistent speed automatically, reducing braking frequency. “That consumes fuel when you have to re-accelerate,” Reed noted. “All these things add up pretty quickly.”

To squeeze out even more efficiency, Reed said he pushes new equipment “a little bit further to see what we can get out of them.”

Morrow said “validation is so critically important” to all fleets, but more so for smaller ones like Ploger.

“The way small fleets and owner-operators remain competitive in the marketplace is strictly through efficiency, where some of the bigger fleets use an economy of scale model to stay competitive,” the 30-year trucking veteran said.

Having less money to invest in new technology also removes the margin for error for what they do invest in. Morrow saw the consequences of rushing into the technology a decade ago when diesel emission standards called for diesel aftertreatment systems.

Aftertreatment systems added new layers of complexity and costs, and because they were mandated by federal emission regulations, all new trucks had to have them, whether the fleet could afford to deal with the initial pain points or not.

“Early on, when we rolled out
Reactions: pilotSteve and SmartElectric
•••

1969 - GM kills the Corvair (Porsche like flat 6 for a decade) and decides to let Japan make small cars. Datsun introduces 240Z.
GM slow downward trend goes from >50% [bankruptcy in this century] down to about 17% market share - similarly for Ford.
Japan gets near 50% of US market.
IF they had started to double fuel economy for big trucks in the 1970s - just imagine how much cleaner the air, lower costs for freight. Seems a little late now. right?
Reactions: pilotSteve
•••