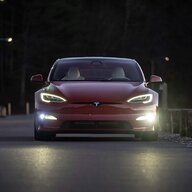 Mid 17' car.
So in February I took the car in to have the driver side door handle replaced, they swapped it out (result of mechanical issue intermittent). I also noticed at the time the rear passenger one was squeaking (not squealing) which was rather annoying and I requested they investigate that, yet I was never informed on anything after that request. Well now my fresh driver door handle is making the occasional squeaking AND after install back in February the handle makes a springy noise when I pull on it 7/10 times, now with the weather nice outside I'm ready for some warranty friendly troubleshooting.

Has anyone played with the issue? I know theres a video out there about fixing the microswitch issue I believe, but I'm not too interested on digging that far in to removing the door panel right off the start.

I noticed there is a small access hole under the handle.

Any suggestions that involve keeping a pissy tech at Tesla Service happy in the case that the Handle needs to be swapped? (Least preferred route as I live 3-5 hours from the closest service centers.)

Also one more addition while I'm writing this, when removing the passenger side lower dash trim (leather which surrounds the glove box opening- it runs beside the touch screen to the passenger side door) whats the best way to remove that? Just pry up on it starting at the touch screen area? I have a little dent in my leather that I will need to get behind the panel and push out to fix.
•••

Try closely looking at the handle as it moves in and out. It might be misaligned and catching the door as it moves.
•••

C
A Microcosm of what's wrong with Tesla service, the door handles

Are Window Shims an Acceptable Fix?