I got my self a new Model S P100D and its almost perfect.

Other than some small issues with software updates and trunk alignment. It's a great car.

However, I'm noticing a noise when turning at low speeds that is coming from the front wheels area. I took the car in for service and the service technician was insisting that its a rubbing noise against the inner plastic fender, he said that its common because I chose to drive the car in LOW mode all the time. I'm pretty mechanically inclined and can tell the difference between a rubbing noise and a grinding noise. They said they moved the plastic or cut away a bit, but I still hear the same noise.

It sounds to me like the wheel bearings or even the drive mechanism from the electric motors to the wheels, I'm assuming that it's the universal joints or whatever that is on the Tesla. I have yet to get under the car to look at it, but I am posting this to find out if anyone else has the same problem, or is it just me expecting it to be silent. I don't recall ever hearing this on another car, but normally there is an engine running! LOLOL....

I only really notice it while turning at some speed mainly in a parking lot or coming around corner.

Any feedback would be great. 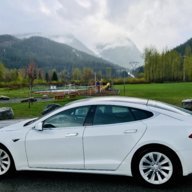 I had a similar issue (Model S, March 2018) reversing out on 3/4 lock, the front left tire was clearly rubbing on the plastic liner.

Service asked to to get the alignment checked which I did and the wheels were within spec. When service looked at they adjusted the entire front bumper which apparently is attached with some adjustable mounts. That seems to have fixed it. The photo is a before shot.