On the bright side, Indiana doesn't require a front license plate unlike most of our neighboring states.
We apparently tied Kentucky in a recent article for most boring state. IMHO, driving a Tesla can help relieve boredom. Lol.

On the not so bright side, Indiana loves to tax and collect fees for motor vehicles.
Electrics and hybrids enjoy more "fees" with a $150 or $75 fee to replace "lost" fuel taxes. The State recognized that on my renewal forms; Tesla triggers said fees.

I got a surprise today when I decided to renew online at the Indiana BMV site of my 17 S's expensive but legally required license plate and registration.
I could not proceed using the Indiana BMV website for plate renewals required a Emissions #.
Ok I thought maybe I would use the mailed paper version. Sure enough it also had a box for the Emissions #.
I called into the Indiana BMV; you can't call a local branch anymore. 45 minutes until I got to a agent. They were surprised that a purely electric vehicle needed such. They noted 2017 vehicles are within the group tagged for this requirement.
I am supposed to get a call back. Unless I hear something back, I will visit a local BMV office, maybe a human override option exists.
I have no idea if my Tesla even has a OBD2 port that an emission facility could even use. 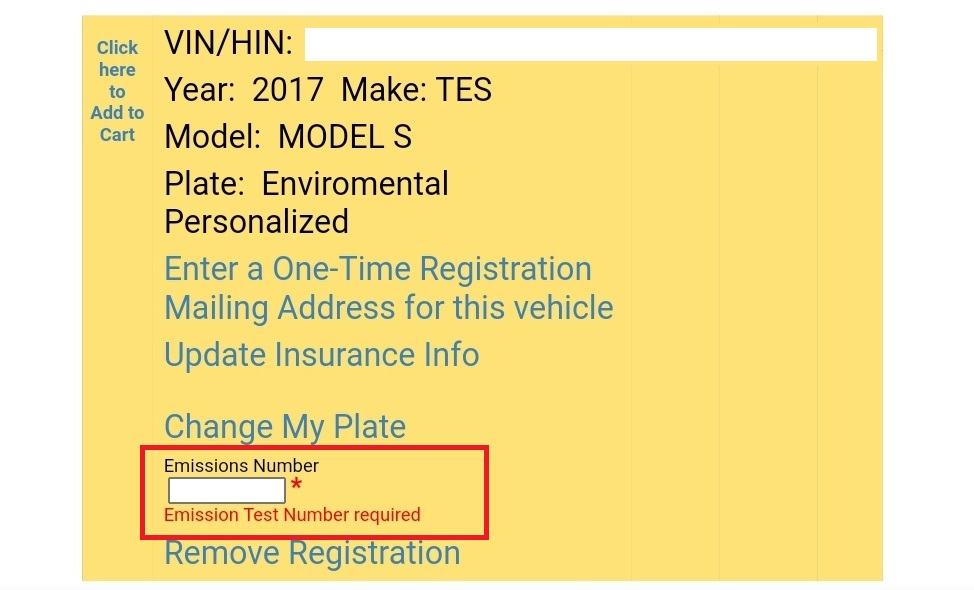 Your car does have an OBDII port, but it's likely not going to tell the emissions center anything they need to know, it's fairly neutered.
D

There is an OBD2 port, but I'd love to see what results they get.
W

Back in the day, my early 1st-gen Prius hybrid was exempt from biannual CA smog checks for more than a decade. Made sense since no way to keep the engine running once they did the proper warm-up.

Then one year (turned out to be its last before totaled) the renewal said it needed a smog check, and turned out not to be a clerical error. I was curious what the smog center was going to read from the tailpipe emissions; turned out they didn't, there was an alternate visual check of emissions equipment for tampering, and I think an OBDII read for any emissions fault codes (none).

So more along the lines of what some states do as a safety check than an actual emissions test...
C

Update.
No callback from Indianapolis (guessing this is where the centralized call center is). Ugh.

Stopped by the local BMV. Front line worker was surprised. Talked to a supervisor in front of me and I was asked "is there a Tesla that uses gas" and I responded "pure Electric" (yeah I know that a couple guys after Youtube revenue have started or actually converted to gas).
She told the front line to type in Exempt and that was that.

I hope this helps the next Tesla owning "Hoosier" hit with this.