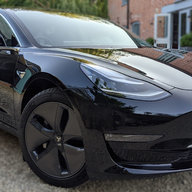 [mods: I saw there are 2 recent threads - one in June appears to be about driving through water which is not the same and one several months old which might be similar but no conclusion. Feel free to merge if you see fit]

TL;DR I wanted to report the problem I had, the fix and good customer service from Tesla (Chelmsford SC in the UK).

I live in the UK but in one of the driest areas. I’ve owned my 2020 AWD model 3 for a year without any issues but we recently had a day of unusually torrential and prolonged rain (I didn’t drive the car and it was parked on a level surface). The next day I opened my boot to find a lot of water had dripped down the boot inside lid, some had made a puddle in the plastic trunk liner but the rest had made it into the under-floor compartment and made the contents stored there wet - I’d estimate something like a litre or two of water all told. I use the frunk more than the boot so it was simply good luck that I opened the boot to notice before the water sat around and caused mould problems.

I know that the boot was properly closed - I had to try a couple of times to open it before the car saw my phone’s Bluetooth signal after driving 40 miles from home. I also have the door/window open alerts enabled and I know they work.

Searching this forum - most leaks in the boot / trunk area seem to be due to either an improperly closed boot lid or more rarely some kind of seal problem. Since my leak clearly ran down the boot lid inside and happened with the car stationary I knew it wasn’t water coming in from below the car and most likely was that seal around the lip of the trunk opening.

So I took a few photos and a video and filed a service request and set to drying the car out before any harm could come of the water.

Took everything out (I normally keep my charge kit, towbar kit etc in the underfloor well - it was all fine, although the bags were a little soggy), soaked up as much water with cloths from the underfloor well as I could, put the back seats down and left the car on camp mode for 3 days plugged into the wall connector to dry everything out - got it nice and dry, no bad smells or staining.

Tesla (Chelmsford, UK) were great and called me in 15 minutes - they confirmed my drying out strategy and booked me in with a courtesy car (meant a longer wait).

I saw no more water ingress during the wait.

Tesla had the car for 4 days in total during which they tested it twice for leaks.
- they found a leak in the right rear quarter panel which they sealed (I doubt this was the cause but points for thoroughness)
- they found the charge door fitted poorly and replaced the assembly (ditto can’t be the cause as my car usually plugged in and the door open, but again thoroughness)
- they replaced the boot seal which they said was “distorted” - I suspect this was the cause.

Since then I’ve been on holiday in the very wet northwest of England and despite extreme rain, no issues so far so I think the seal did the job. If I get any recurrence I’ll reply.

This is my second experience of Tesla Chelmsford (UK) and they’ve been helpful, courteous and kept me informed by messages and phone calls (first time was to fix a small manufacturing fault - a crease in the rear seat which they noticed at pre-delivery but had no spares to replace until later).

At the moment my Tesla has had the same number of service visits as my previous Mercedes for initial “quality control” issues - but the experience of getting it sorted has been equally good. Of course the Mercedes also had an annual service so I suppose it’s 3:2 for mercedes to Tesla (so far) for inconvenient visits to the dealer in the first year

PS I didn’t even feel massively inconvenienced as they lent me a 2016 model X p90d which was a nice experience to try out - but overall I prefer the drive of my low-slung model 3 to an SUV.

S
Water in the Trunk