Anyone on Oahu with a Kid Tesla? 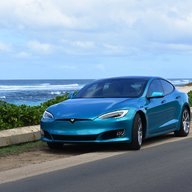 I have been doing a series of jokes while awaiting my Tesla S to come onto the Island (apparently it's been sitting at Oakland port for a few days now).

Specifically, I put a hotwheels model S in my garage, as a "seed" then I've recently swapped it out for a model S diecast model. I even "plugged it in" for the lol's since a few of my friends said I needed it for the 'seed' to grow.

So, I was wondering if anyone has one of those model S little cars like 6 year olds can drive around in, and if I could borrow it for a little. I just want a photo op with it "plugged in" as it's the logical next step before the full sized vehicle pops on over.

Little late but I've got one
Reactions: LN1_Casey

KevinY said:
Little late but I've got one
Click to expand...

I'm still down for the lulz. Are you near Mililani? I will have my car starting on Thursday, if you'd prefer to have it picked up.
K

LN1_Casey said:
I'm still down for the lulz. Are you near Mililani? I will have my car starting on Thursday, if you'd prefer to have it picked up.
Click to expand...

Rent Your Tesla To Me For A Month?