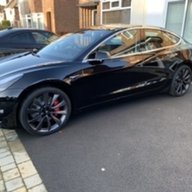 Very strange , posted something related yesterday but thought I had cleared the issue.
Some data :
- I have had my model 3 for 18 months no issues until now
- my iPhone for about 6 months no issues until now
- Not done a software update for about 4 weeks on the car ( no new ones due)
- Not done a software update on the phone other than app updates, but nothing for the Tesla one as it isn’t due

3 days ago my phone started to not be recognised by the car and was showing as disconnected. To rectify I have to turn off/on the Bluetooth on the phone and it works again.

anyone else having similar issues ?
A

There was a Tesla app update 2-3 days ago on iOS (mine updated 2 days ago) version 3.10.11 - possible the update caused a glitch with the Bluetooth phone key which disconnecting and reconnecting fixed.

If it’s still doing it try restarting the phone and if that doesn’t work unpair the phone key on the car screen and pair it again.
Reactions: init6 and Ant M3

That worked a treat , great shout !

M
No wifi, no Bluetooth, no microphone

The UK and Ireland Feb 28, 2021
NewbieT
N
B
Some strange Bluetooth issues