So it seems that one of the new "features" of the 2021 Model 3 is sunken rear door handles. This was one of the issues I noted after bringing my new car from the delivery center straight to the repair center on day 1 as so many people do.

The SA gasped at my door handles and exclaimed "That isn't right!".

But when I picked it up a week later the sunken handles were unchanged and that very same SA told me they didn't work on them because "It's within spec."
I measured the misalignment to be 1.8mm.

Then when the mobile tech came out with the backordered parts I asked if he would fix the handles but he politely declined. I asked him for tips on fixing it myself and he said "don't".

I didn't listen, so here we go. Before/after pics to get you motivated: 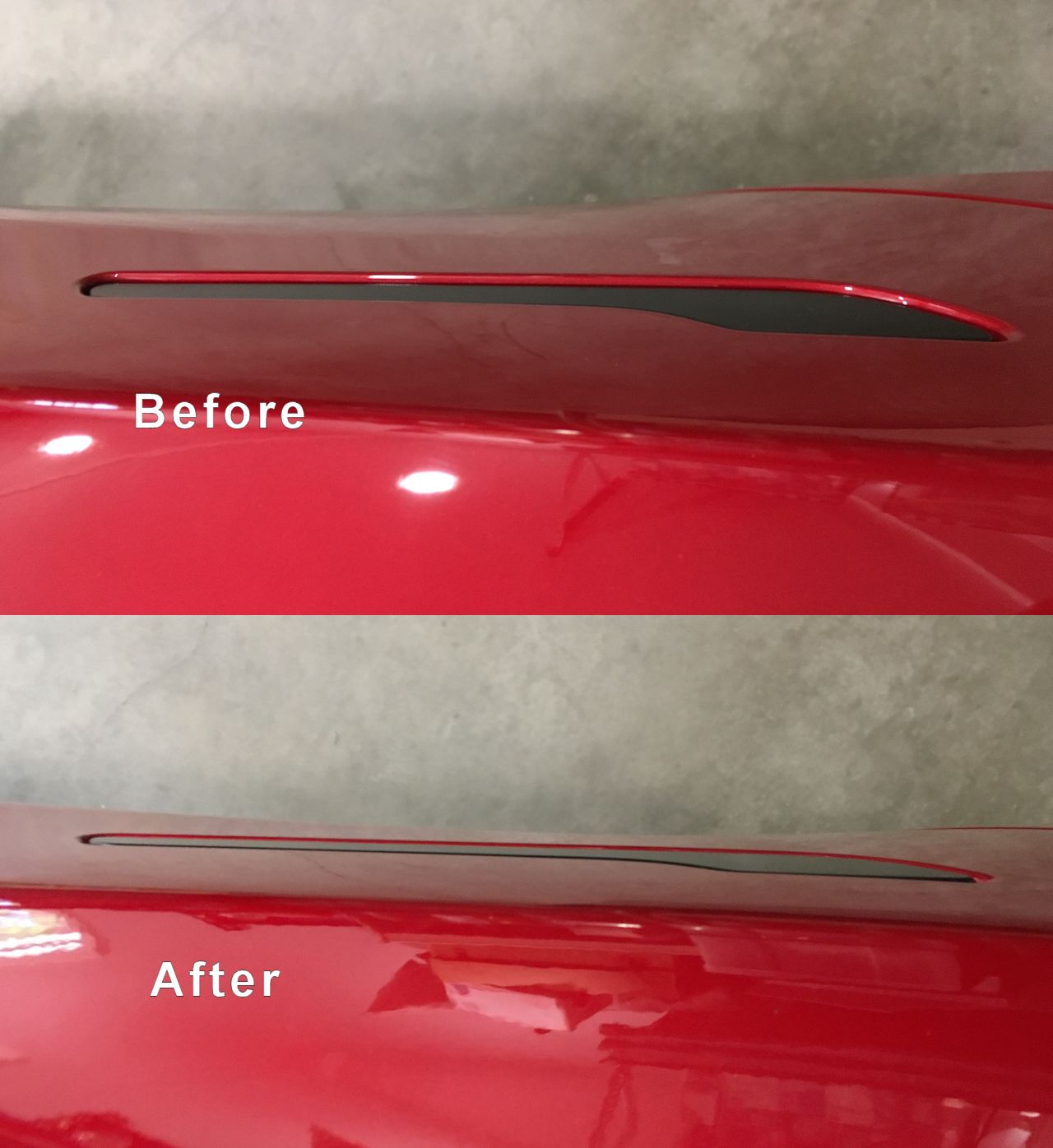 These are the tools in order of use:
T27 driver, medium length for the 2 door panel bolts
Trim tool, though maybe the fork kind would be better because the snaps are pretty far inboard from the edges.
Jeweler's flathead to unlock the door & window switch connectors
13mm socket with a short extension for the glass (small ratchet is easier as bolts are not very tight)
8mm socket perhaps powered for the 9 door module bolts
Long flathead for poking at the release clip on the door handle wiring connector
10mm socket on a long driver for removing the 3 door handle nuts 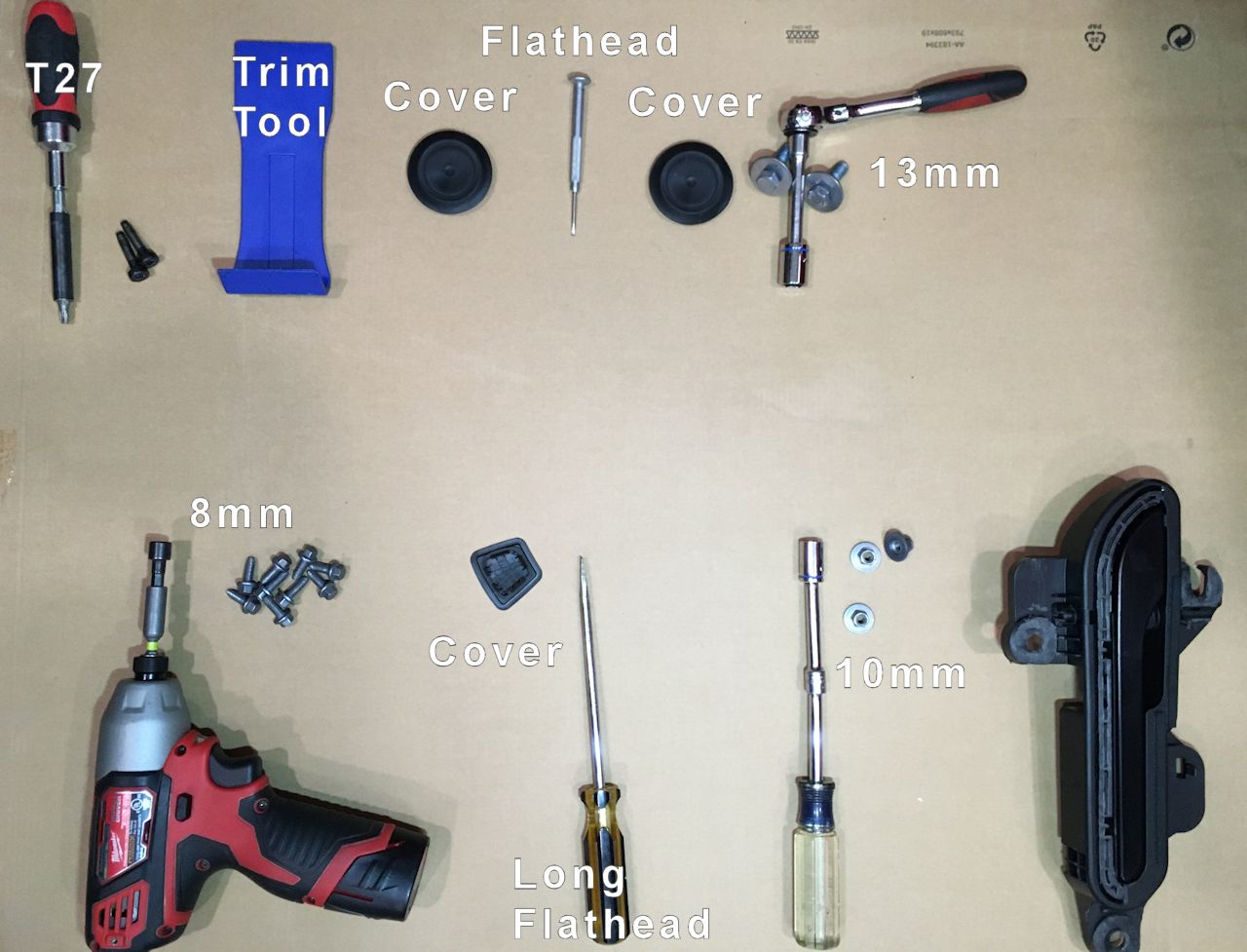 Step 1 is to remove the glass and here's a great video that tells you how to do it in 3 minutes:


I'll add that you might not be able to just yank the interior panel off like that and be careful when you do - the wires are very short! Once the panel is loose you should remove one of the round rubber covers and roll down the window about half-way so that you can see the 13mm bolts securing the glass. Then use the jeweler's screwdriver to disconnect the wires to the window switch and door release button. The other two wires can be removed by hand but you may find it easier to pull the puddle light out so you can see the connector.

I recommend sitting on a tacklebox or something so that the door panel can rest on your knees as you unplug everything.

Next pull all the snaps on both ends of the inner belt molding: 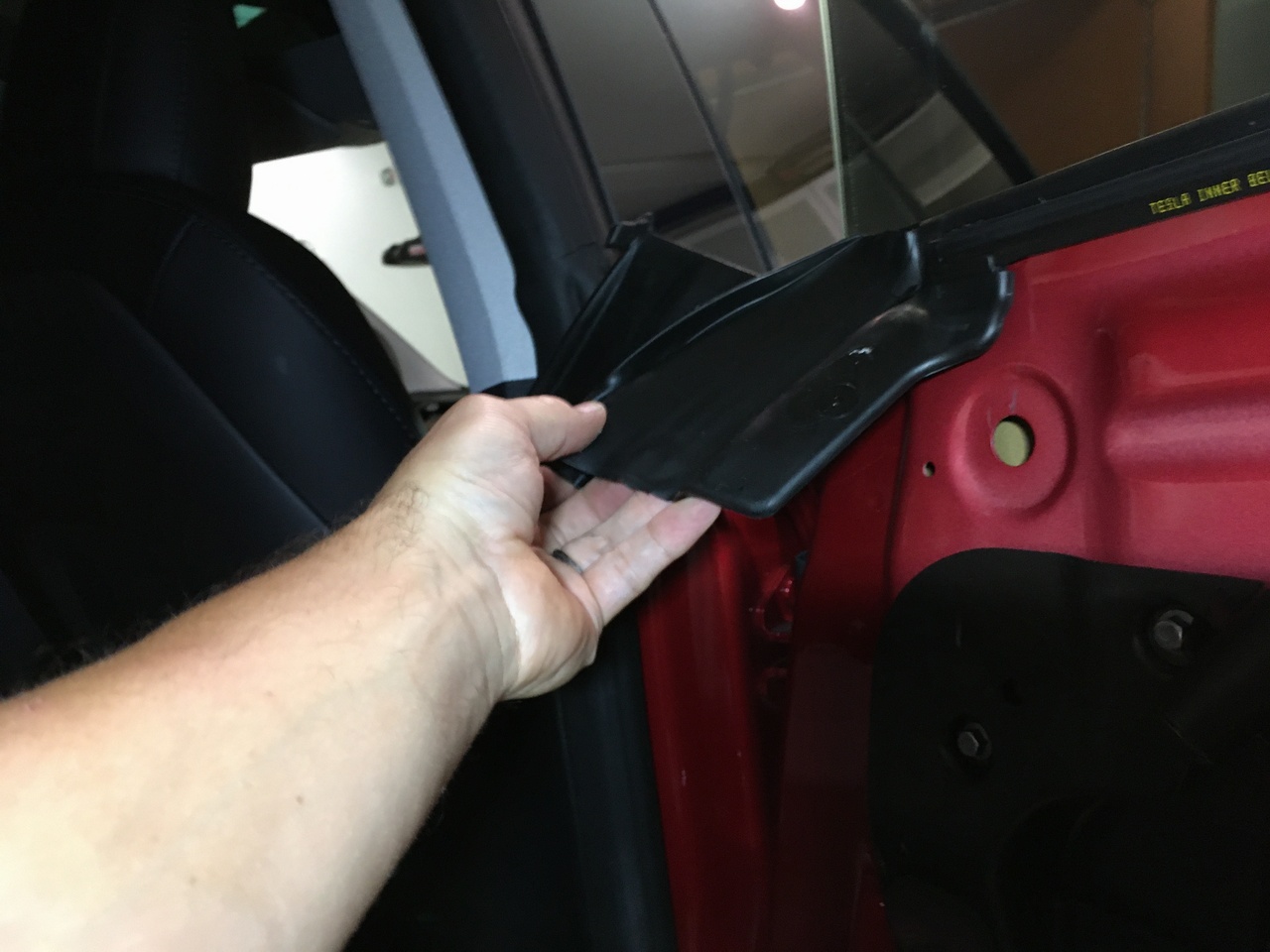 The orange snaps are clearly visible here and once they're all loose you can easily lift the molding up off the door edge:

And here's one of the two 13mm bolts you positioned earlier by rolling down the window. The round rubber covers pop right off: 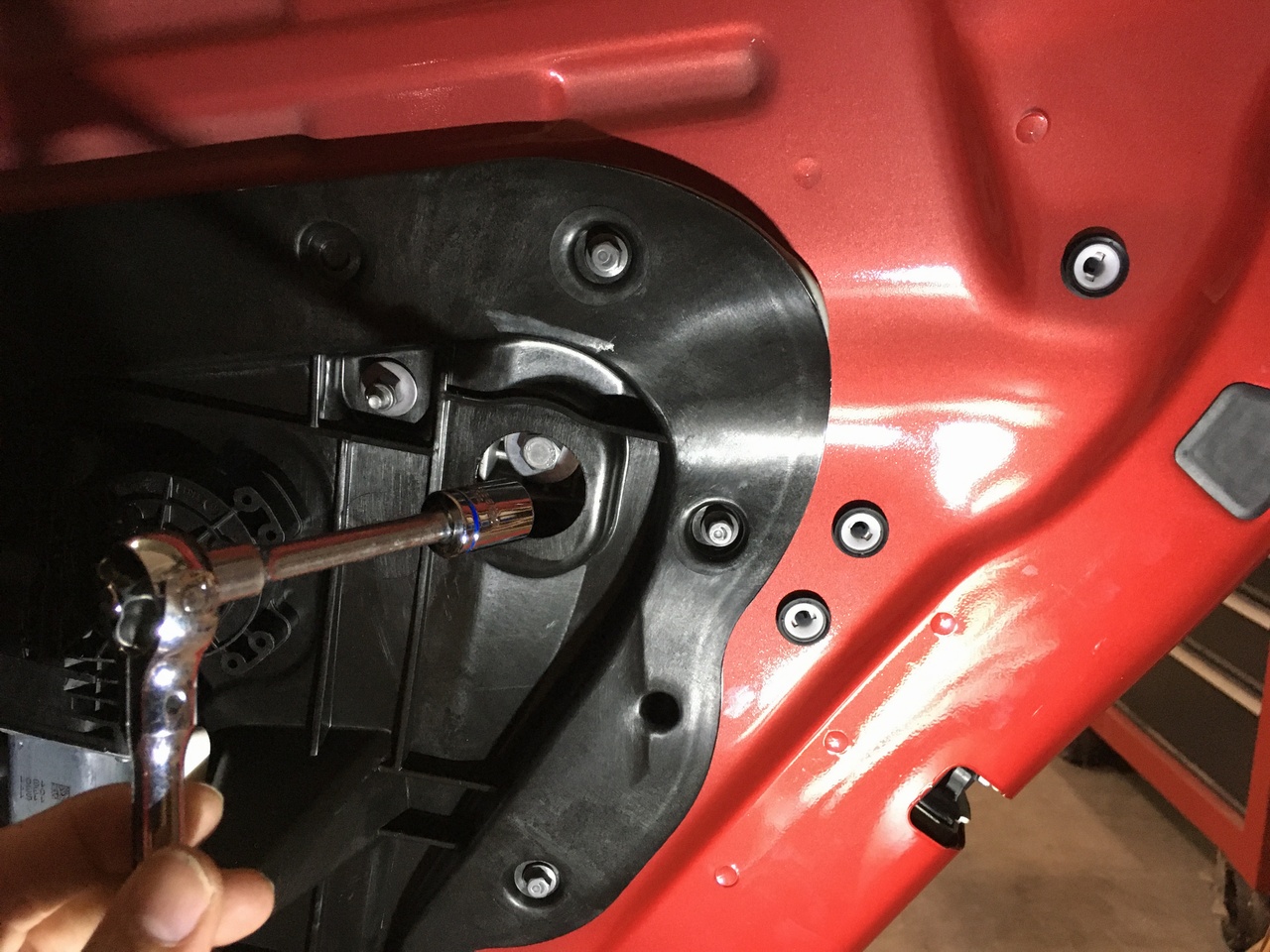 Note the location of the threads within the square aluminum support after removing the first 13mm bolt. If you put it back this way then your window fore/aft loaction will be about the same as it was before. Check your window before starting the process to see if you want to put it back exactly as it was or shift it a little bit fore/aft. 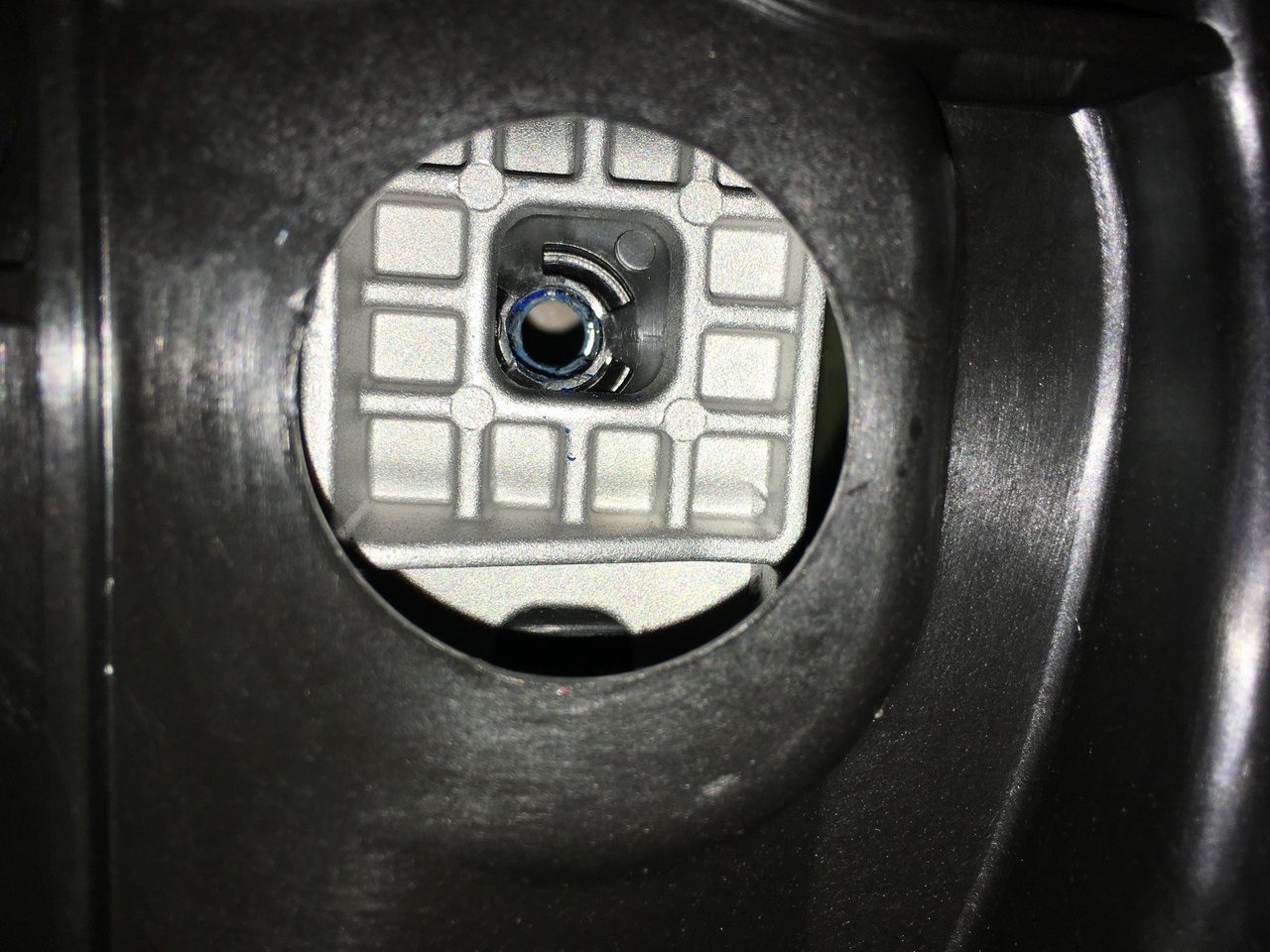 The glass shouldn't fall when you remove the bolts and should lift out easily. Be careful not to snag the 2 attachment clamps as it seems they are only held in place with a loose piece of masking tape. I suspect that if you knock these loose it'll be harder to get the window back in its exact original location. 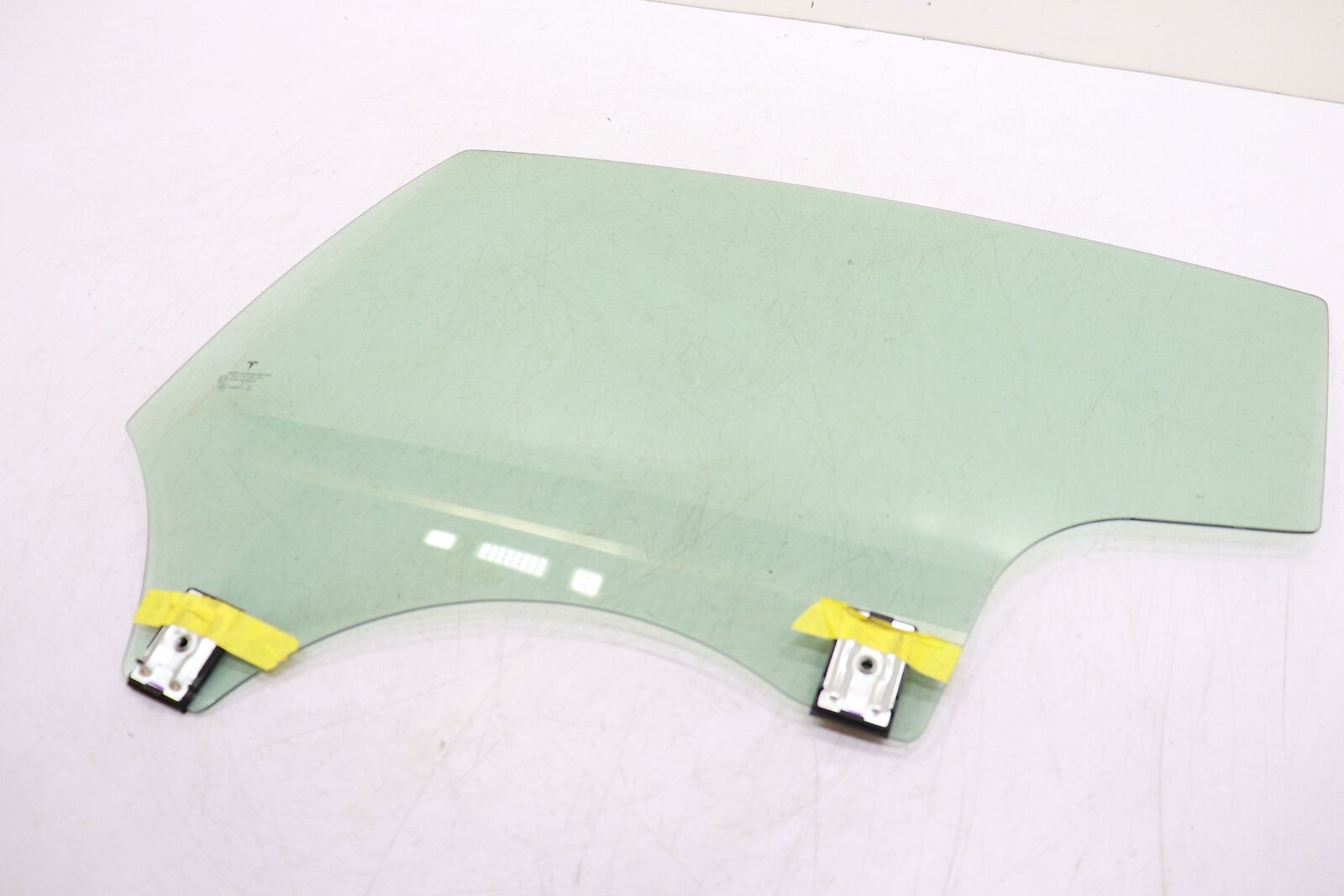 Now you can unplug the window motor and unclip the emergency release cable. The motor wire has a slightly tricky lock: 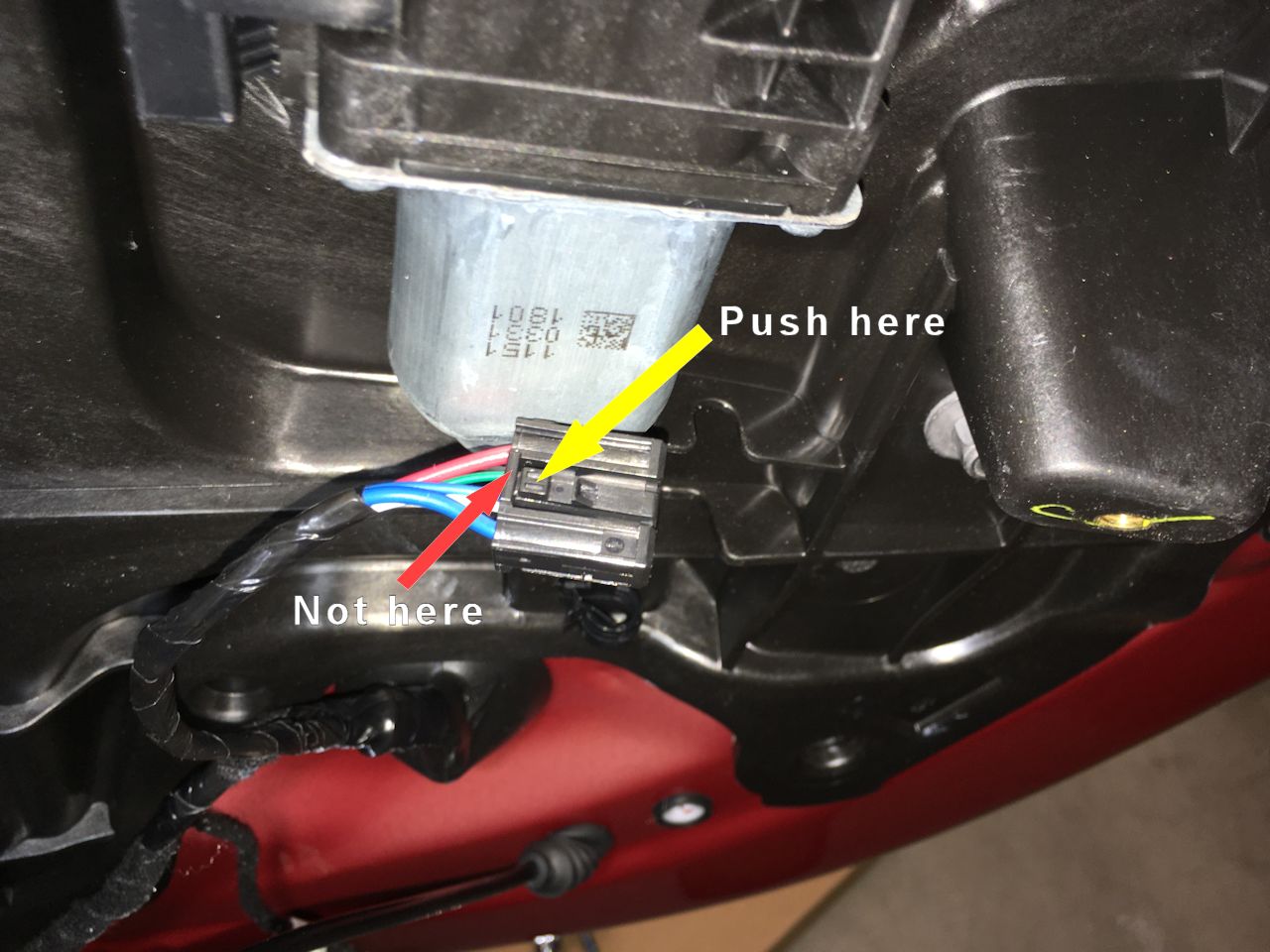 Then remove the door module by removing *only the perimeter bolts*. It remains in place with 2 snaps illustrated in the aforementioned video. 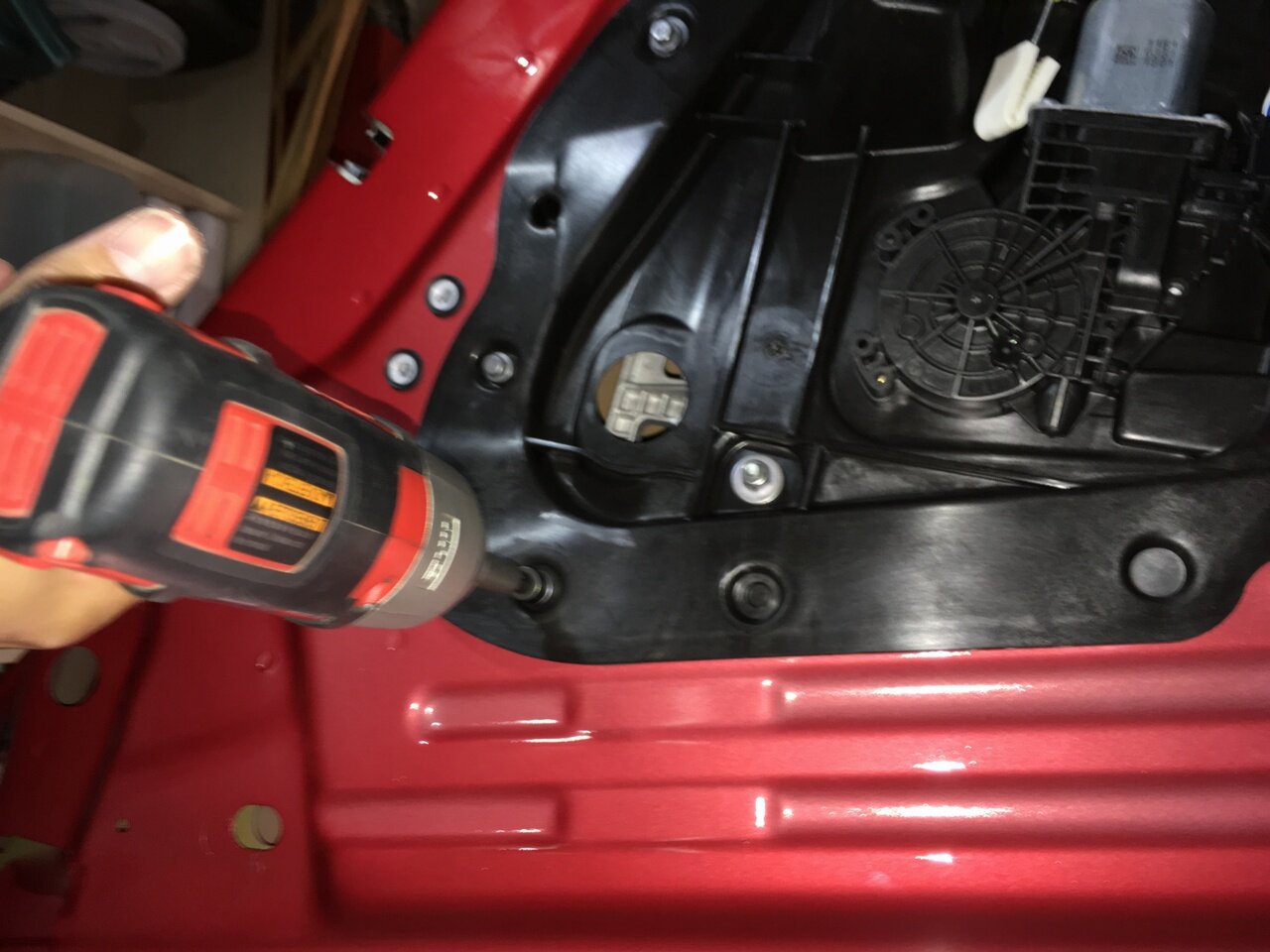 Now pull out the rectangular cover to expose the 3rd door handle nut: 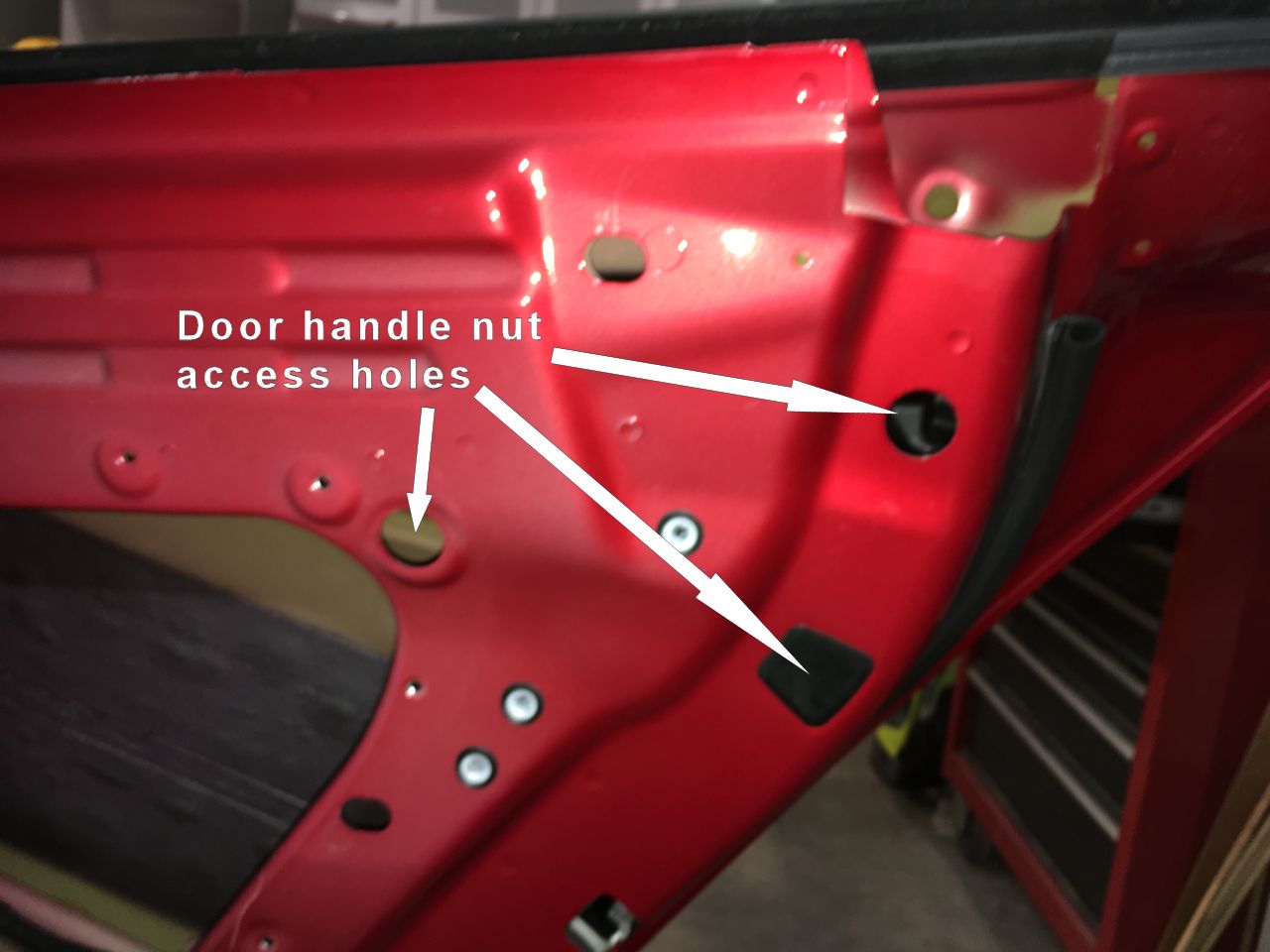 Disconnnect the exterior door handle wire. The red lock needs to go downward. I used a long screwdriver to push on it: 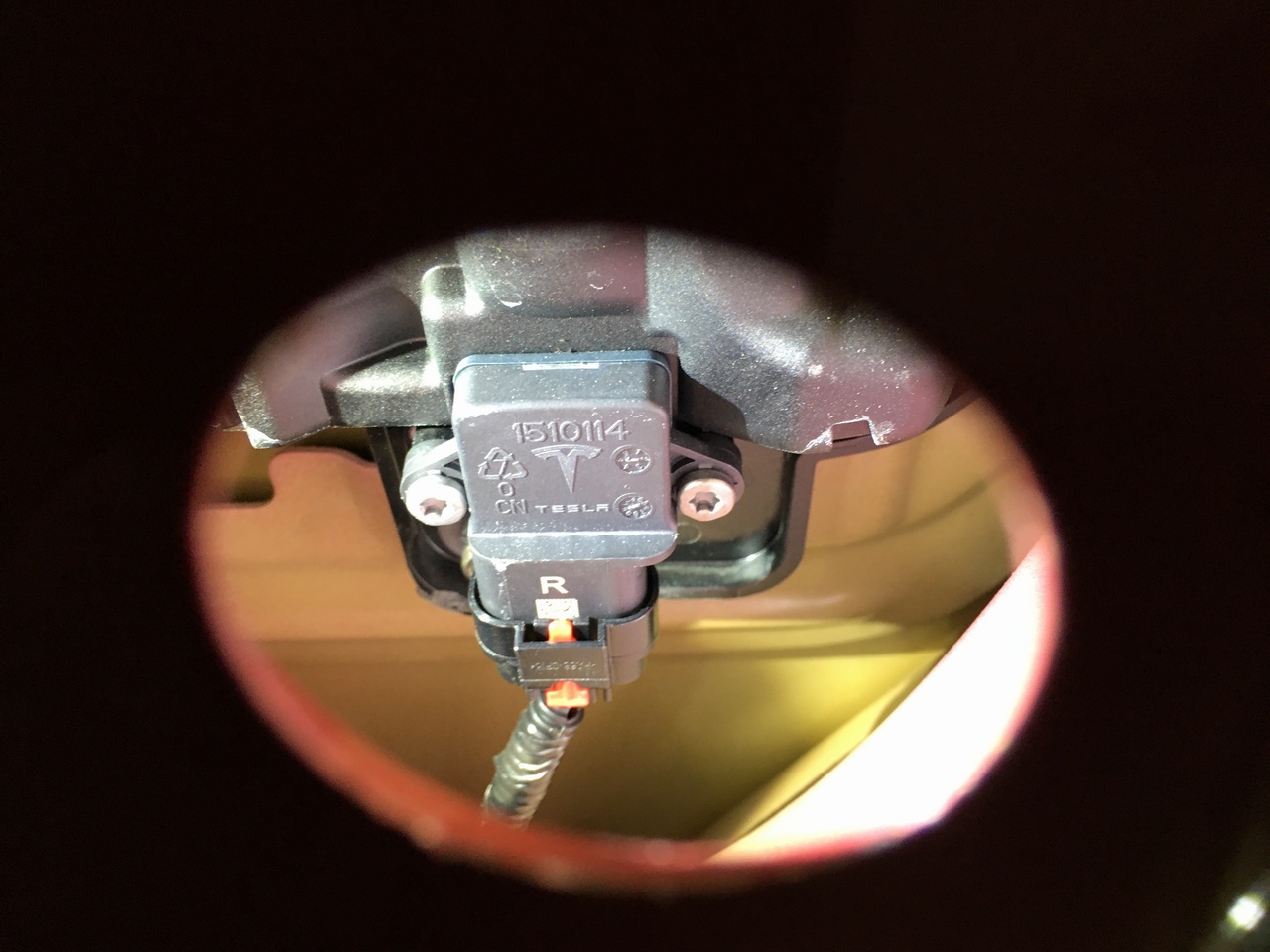 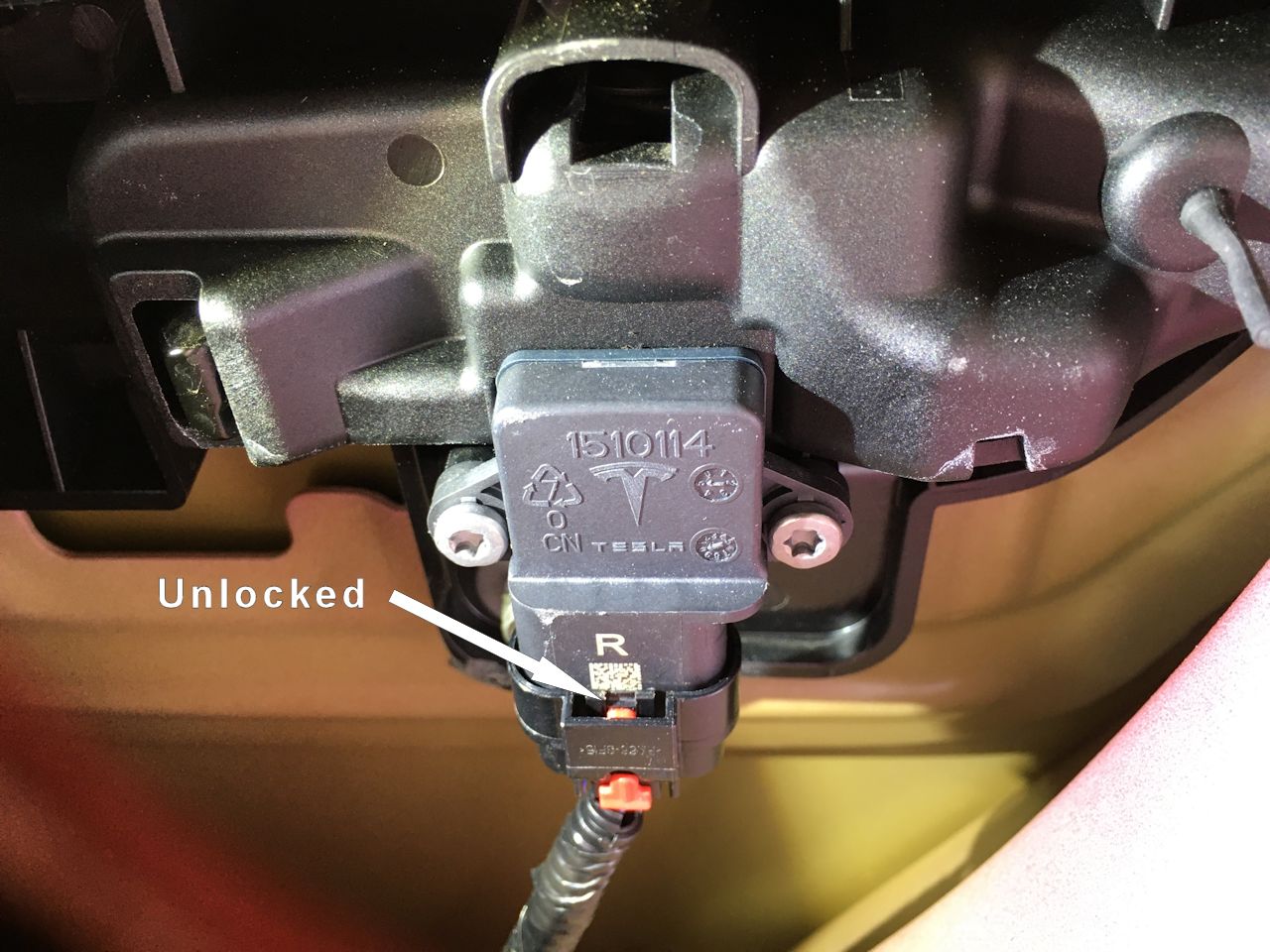 Finally with one hand inside the door for guidance you can find and loosen the 3 nuts with a long driver. Try not to drop the rear nuts as they can fall into the latch and be difficult to recover. I suggest removing the front nut last so that you can avoid dropping the handle without worrying about dropping the nut. 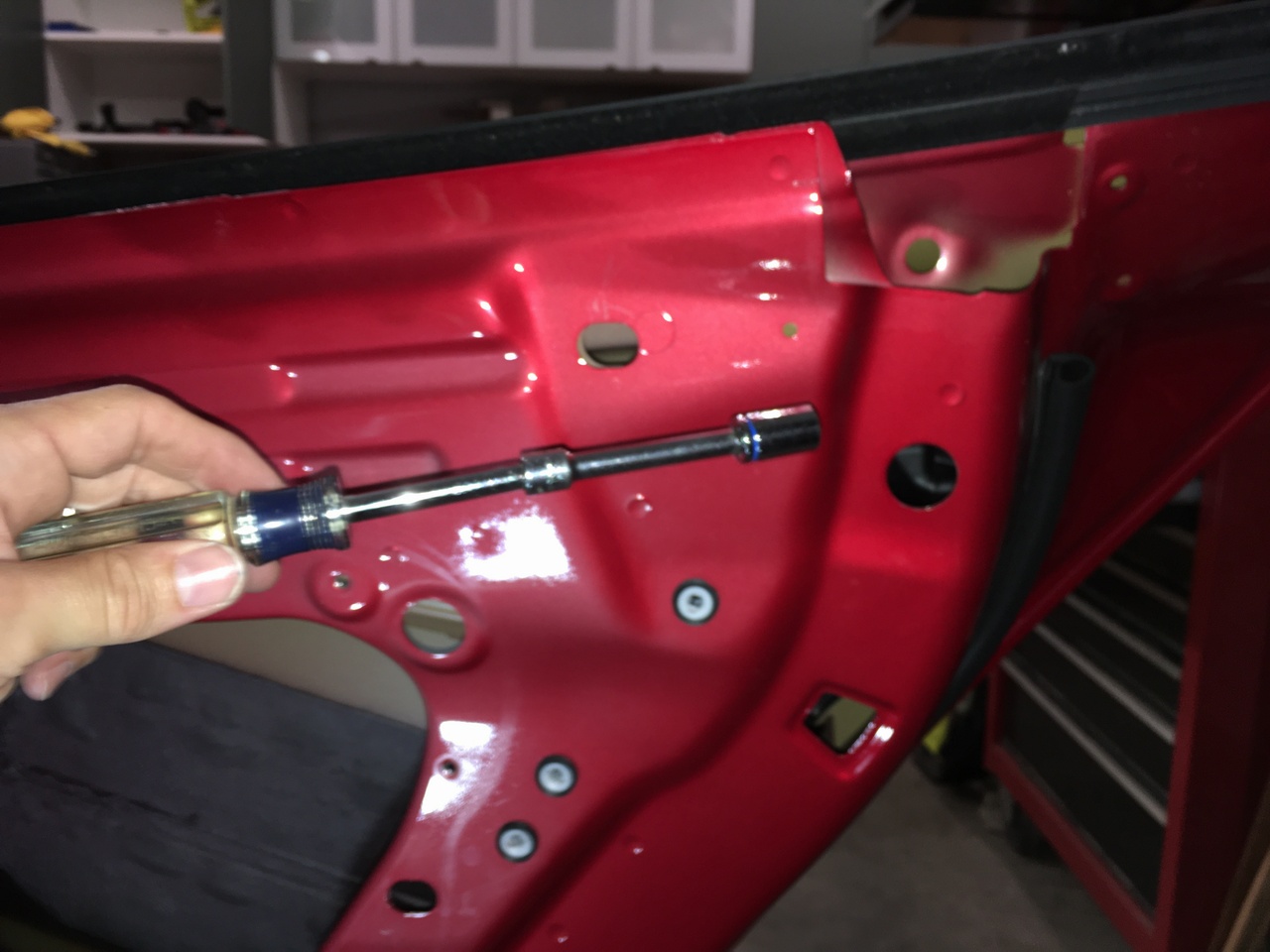 Hmmm... mine has already been Dremeled by someone. Perhaps the service center actually did give it a shot but then gave up and didn't want to tell me? 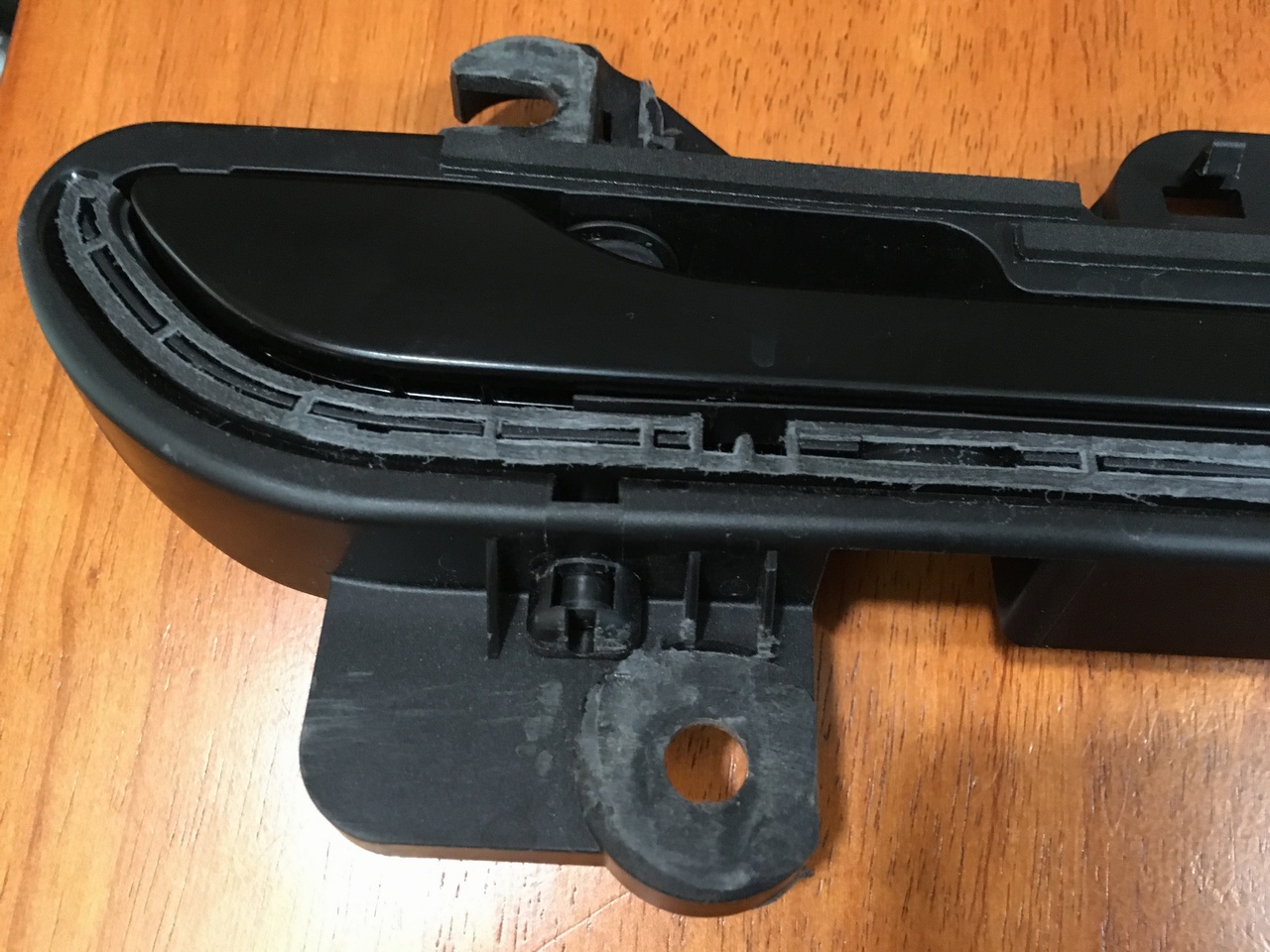 Four snaps hold this filler piece in place. Someone has Dremeled it a lot but I don't think it was actually necessary. I kept this piece out whilst test-fitting the handle so as not to confuse the contact points but when I was done and put it back in everything fit just fine. 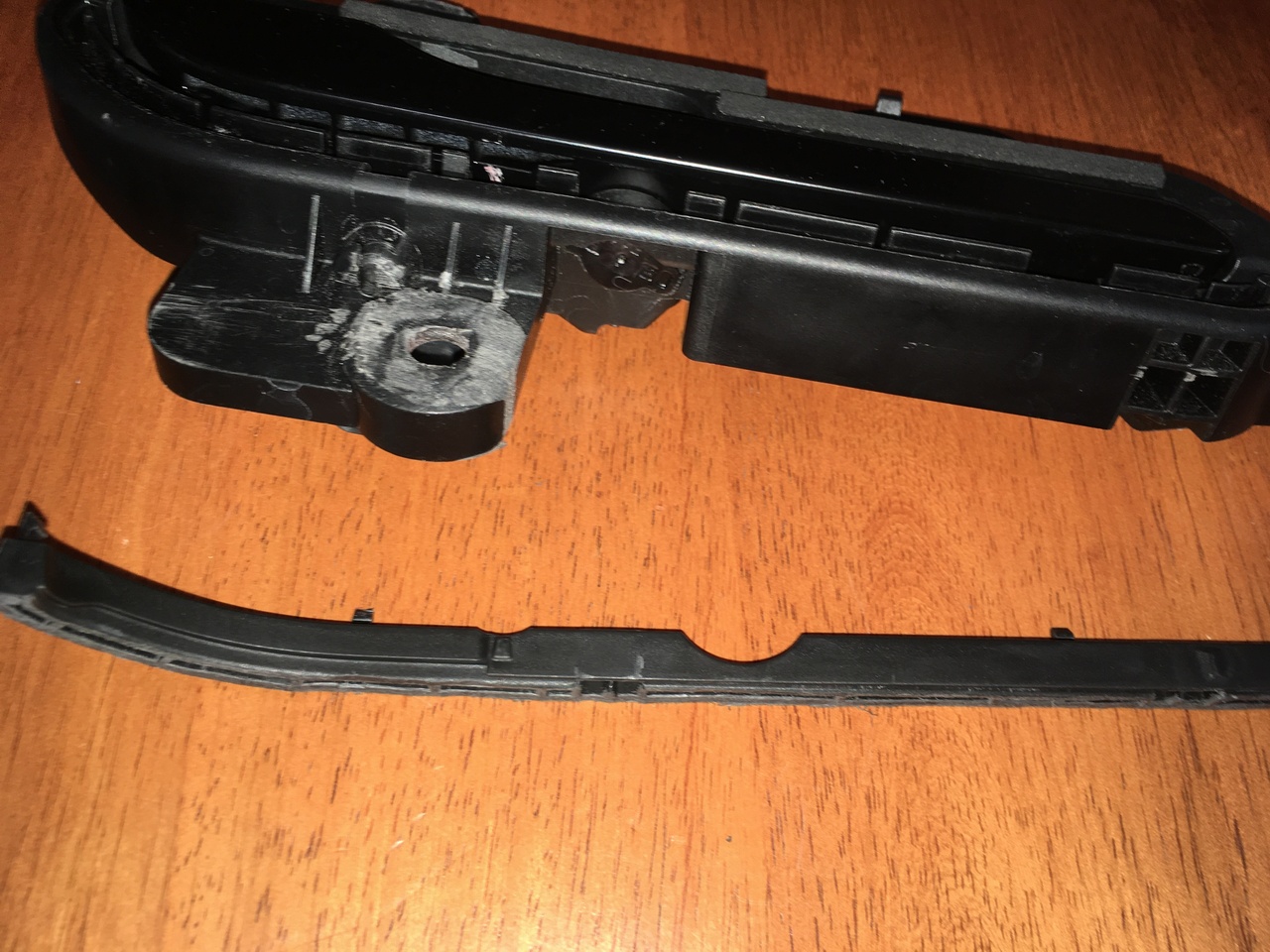 I thought I'd need to bring these into the office and precisely mill down the mounting tabs but it turns out that a Dremel is fine and it's not too difficult to keep things straight and even, though it is a good 15-20 minutes of Dremeling to get all that material off. Test fits are easy to do along the way, just watch from the outside as you guide the handle back in so that you don't mash/scratch it on the bolt heads. 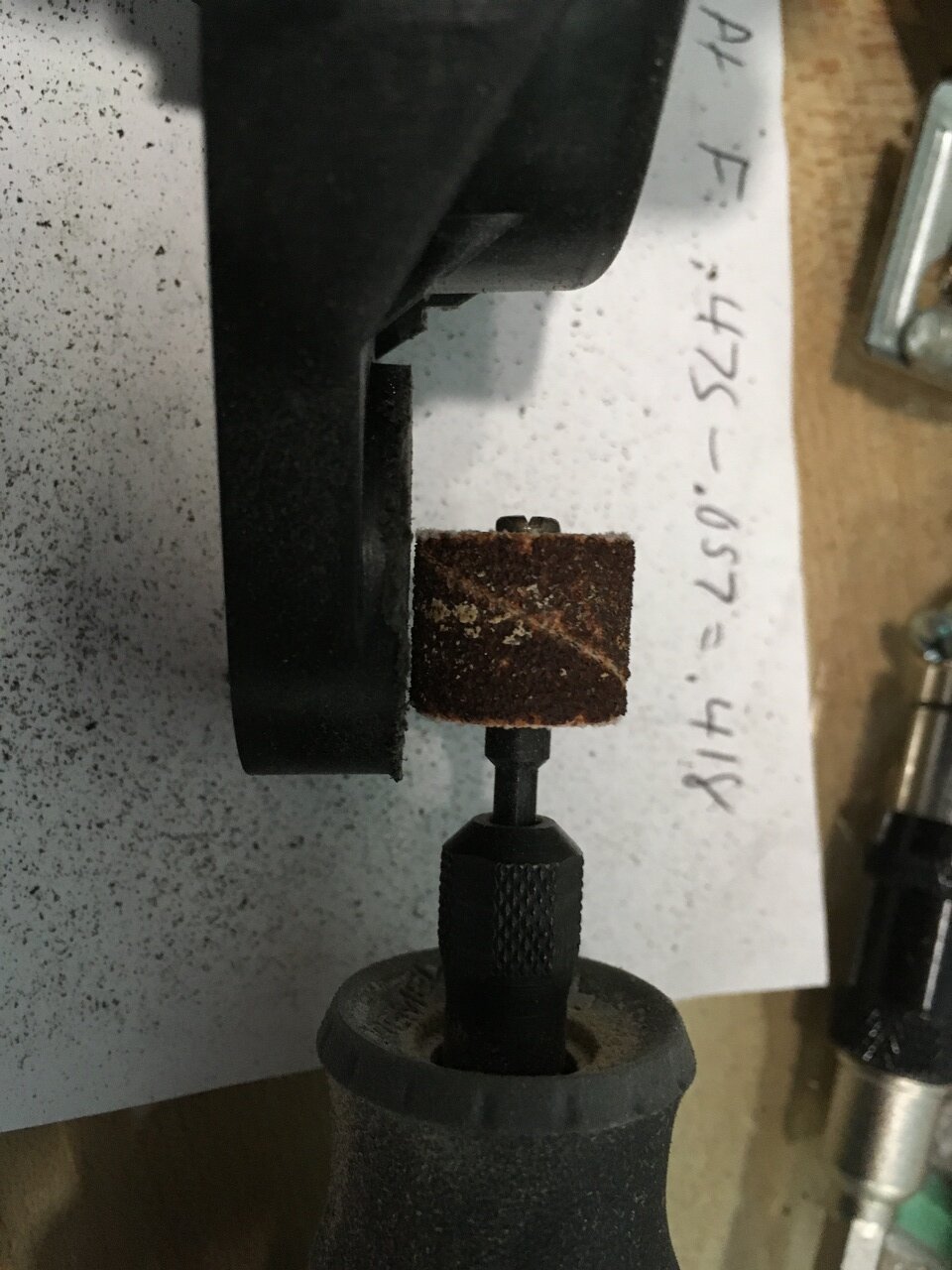 This is what it looks like inside the door: 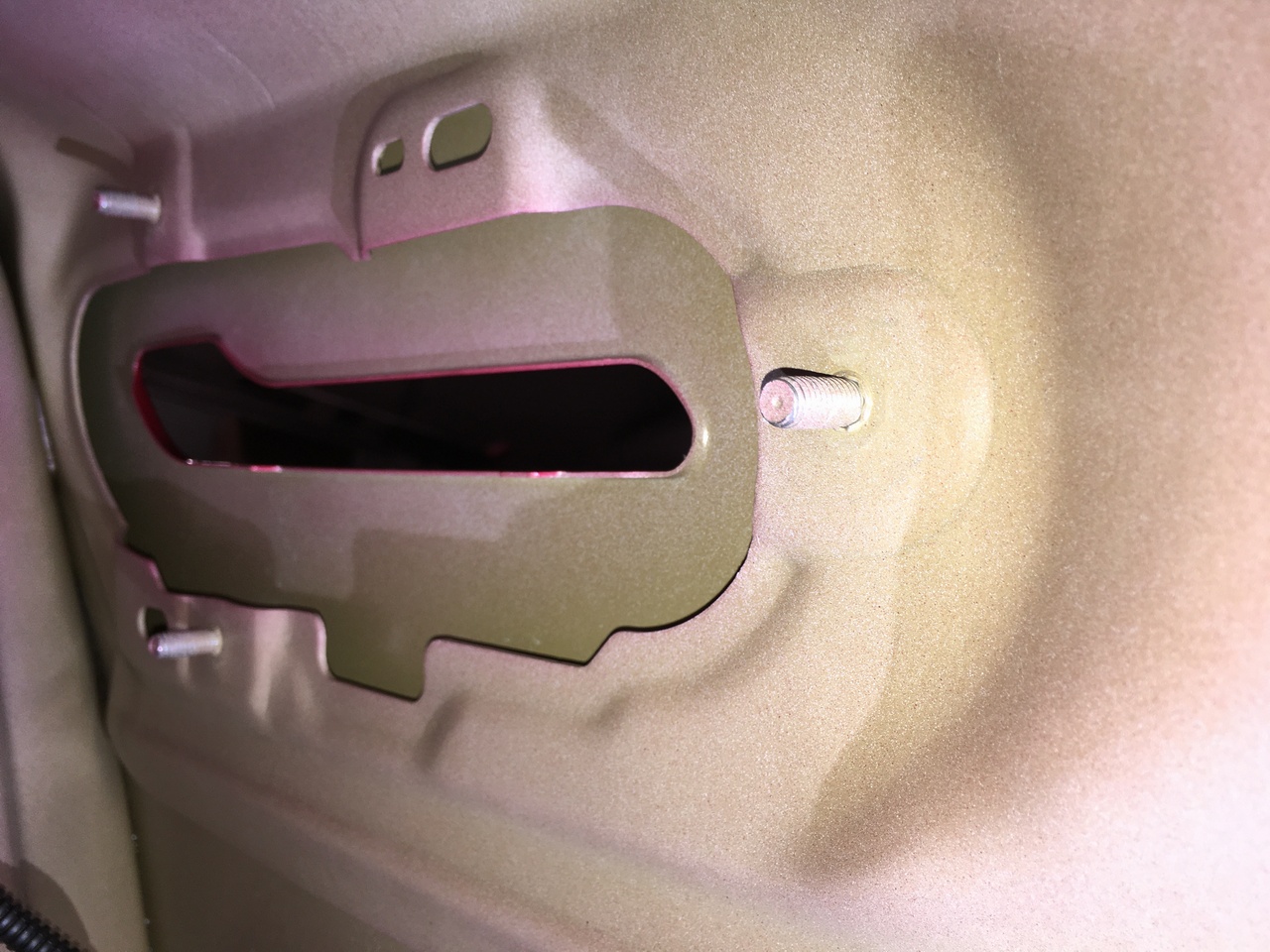 And with the handle installed: 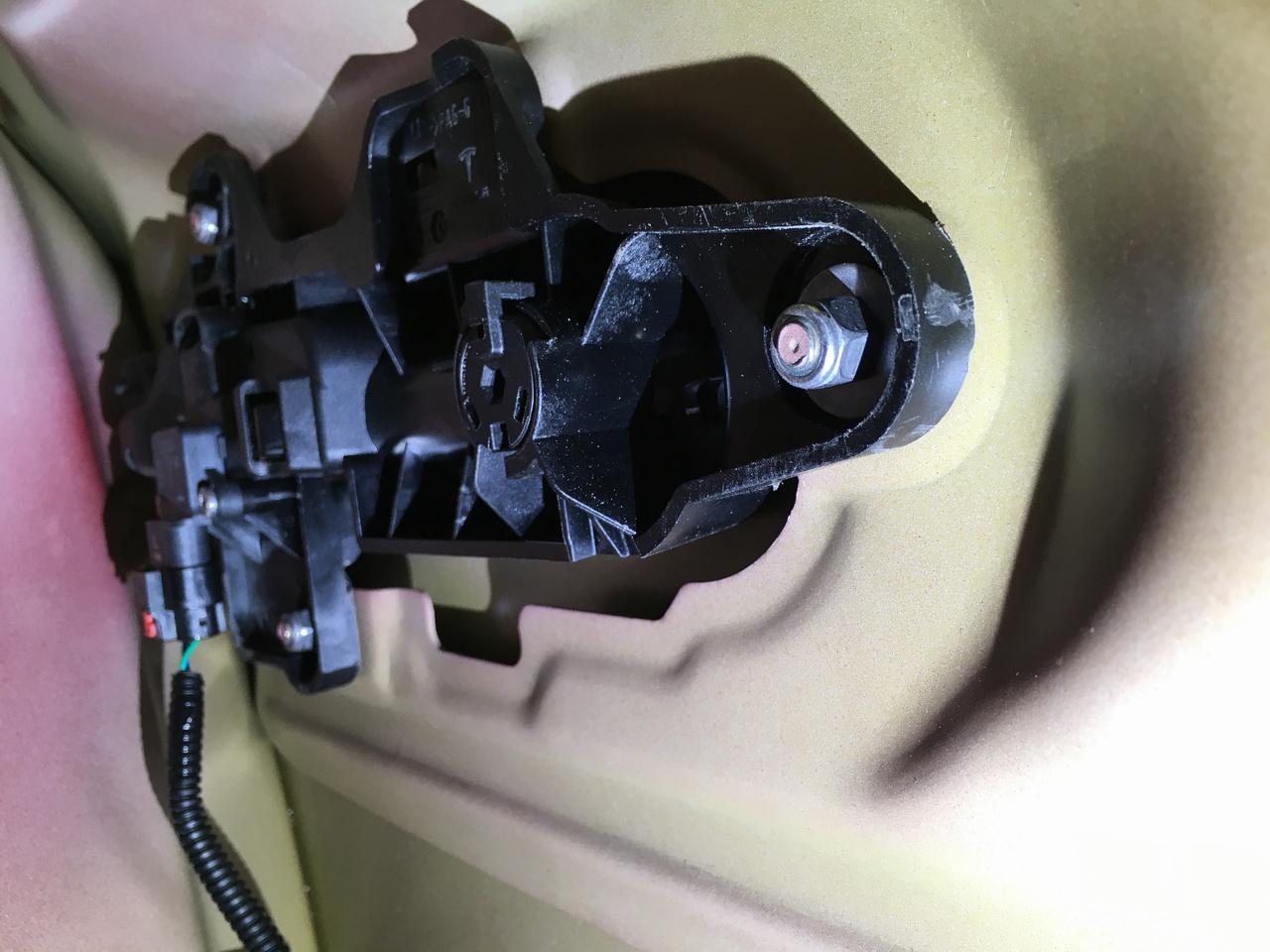 And finally after much Dremeling, it's ready to go back in. Note that I Dremeled the square face to the left of the bottom mounting ear also - I don't know if that was necessary but it seemed like it was getting close so I figured I might as well.

Reassembly is straightforward with the following tips:
Don't forget to reconnect the handle wire.
Don't drop the glass inside the door, familiarize yourself with the aluminum mounts when it's apart so you can be sure to guide it in to be safely captured before you let go of the glass and start fiddling with the 13mm bolts.
When almost done, securely hang the door panel back on by its top edge and then close the door to check the glass alignment. Then it's easy to just lift the panel back off and pull the two bolt covers for adjustment.

You should get a prize for dedication. Nice work!
Reactions: Jejunjm and TBrownTX
•••

I have this issue on my driver side rear door handle. Appreciate you posting all the steps ... which has convinced me to continue living with the issue!
Reactions: TBrownTX
•••

Haha, honestly it's less work than changing a set of spark plugs. It took me about 2.5 hours but 1 hour of that was cautiously spent test-fitting after each little bit of Dremeling and 1/2 hour of that was spent taking pictures for you.

So really only an hour to gather all the tools, disassemble/reassemble both doors and then clean up and put everything away.

If you're handy enough to grind down some plastic with reasonable accuracy and careful enough not to drop the handle or the glass this is a pretty easy job. I'll give it 2 stars. And if you have better tools than my cordless Dremel it's even easier! A router bit or cutoff wheel set to the right height in a drill press would make this way easier.

The biggest hurdle was just determining whether or not it could be done without some side-effect or limiting obstacle and fortunately it can! The mounting ears are plenty thick enough to withstand a little grinding and the resulting shift doesn't create any new problems. And of course you could build the ears back up with layers of tape if you managed to grind too much off.

I was a little nervous about the glass alignment since I didn't know if the mechanical alignment would be difficult/risky or if there would be a need for software re-calibration but it turned out to be very simple and conventional. The two bolts only set the fore/aft position and if you close the door slowly you can clearly see if it's at risk of contacting the B-pillar or quarter glass. You can even close the door with the window down and then reach in from the front door to raise it if you're super nervous.
Reactions: focher
•••

Door handles not flush. Odds this can be corrected? **Pics**

B
New style Door handle broke after 3 months, Seems to be a calibration issue?