Finally installed my home charger in the garage 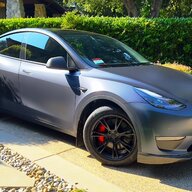 I just had a Tesla recommended electrician install a NEMA 14-50 outlet in my garage including a Tesla HPWC.

My 200 amp panel is located on the side of the house while my detached garage is located in the rear.
The electrician ran a 6 gauge wire with 50A breaker from my panel under the house sub floor out into a trench and then into the garage. Total length with about 130 feet of wires.

The NEMA 14-50 outlet was place in the middle of the garage, the Tesla HPWC was connected with a pig tail into the outlet. It's my preference to not hard wire the HPWC but to use the pig tail into the NEMA 14-50 because I wanted the Tesla mobile charger in my car. I also didn't want to constantly plug and unplug the mobile charger and also just in case the HPWC fails, then I'll have a back up. I also got a great deal on theTesla HPWC for $250 instead of $500.

I am aware that by plugging in the Tesla HPWC into the NEMA 14-50, I will only get 37 miles per hour charging at 40A, it's still better than the mobile charger at 30 miles. I was considering purchasing another mobile charger at $300 but I was able to get a great deal on the HPWC instead so this works out.

Everything installed plus the Tesla HPWC was $1,950.00

I had over 6 different quotes within 3 weeks and this was the most fair priced along with experience.

Question since u made that long run why not just add sub panel and have both hardwire HPWC and 14-50 via disconnect ?
Reactions: RedOctober, EasterEgg and Asad1087
X

Looks good and a great deal!

Just my opinion, but I would have had the electrician put in 60 amp service/outlet to future proof and maximize the charge rate. Or at least run the appropriate gauge cable. I’m under a TOU electric rate program.
Reactions: RedOctober, Asad1087, EasterEgg and 2 others

P85_DA said:
Question since u made that long run why not just add sub panel and have both hardwire HPWC and 14-50 via disconnect ?
Click to expand...

That would be additional to the $1,950 that I spent and didn't feel that I needed both.
Reactions: Asad1087

Any SAFE extension cords for either Wall Connector or Nema 14-50?