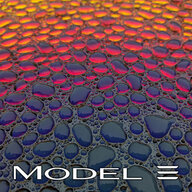 To clarify, my gripe with some cars' side mirrors is that when you've optimized for blind spot, you have very little visibility farther back in the lane, which is very useful for passing. More so in aggressive-driving cities where there's likely someone in the adjacent lane going way too fast, and you'll want to see that from the side view. This is also beneficial for cars that don't have great rear view visibility, like Model S and 3. Can't speak to X cause I haven't driven one.

Fortunately 3 side mirrors can be optimized for blind spots AND see very far back in the lanes. 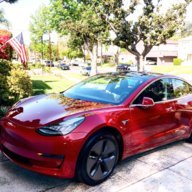 novox77 said:
I picked up my Model 3 a week ago and shared my first impressions here:
Model 3 - 1st impressions (for real this time)

Now a week later, I've put on another 300 miles and had a chance to familiarize myself with the car in some other ways. I've also been able to test out Enhanced AutoPilot quite a bit (this is my first time using AP). Here's the good and bad:


Door Handles
In most situations, the door handles are pretty easy to operate. It takes a bit of practice at first, but now it's pretty fluid. One side of the car will feel weirder than the other depending on your handedness. Fortunately I'm a lefty, and it's more natural to use your left hand on the driver's side. But it's definitely possible and not so difficult to open the door with your right hand.

But then there are the times where you have a kid in one arm and a happy meal box in the other, and it's no longer possible to just hook a pinky over a handle to pull open the door. Something has to be put down temporarily. Or, you're on the side of the car that requires you to use the weird hand because you are carrying something with the better hand. It's a nit-pick, but these situations will recur here and there over the lifespan of your ownership, so these little inconveniences can add up in your mind. For me, I can deal with it, given how happy I am with the core driving experience and efficiency of the car.

Phone Key
As soon as they announced a Bluetooth solution to unlock the car, I suspected there would be issues. I used to be a hardcore Android tinkerer, rooting devices and trying out custom firmware. Bluetooth was universally the most troublesome feature to get right. Even stock firmware would glitch from time to time, requiring turning BT off/on or toggling airplane mode on/off to fix a bad connection. I've seen this on phones, headsets, speakers, and other BT/BLE connected devices.

My suspicions have been confirmed. The phone works as a key most of the time, but every once in a while, it doesn't, or there's some lag before the car responds. Like the door handles, the occasional hardship can wear on you over time. In those situations, I pull out my wallet and tap the B-pillar to unlock. I'm hoping over time, the BT connection gets more reliable. For reference, I have a Google Pixel.

Rear View
The view out the back is like what many people have reported; the lower part of the view is obstructed. However, there is no real concern; you can see cars immediately behind you (their windshield and up), and you can fully see a following car if they are 2-3 car lengths behind you. There are no blind spots large enough to obscure a car or a motorcyclist.

The only concern I can think of is if you're backing up and there's a child on a tricycle or something behind the car. Fortunately the rear camera automatically appears when you reverse, so make sure to check there in addition to the rear view mirror. This applies to other cars too and not specifically to Model 3.

Scroll Wheels
There have been a few times where I'm doing a tight turn maneuver and my hands will brush against the scroll wheels as I'm turning the wheel, causing a change in volume or track. I wonder if I'll eventually adapt the way I turn to avoid them. It doesn't happen often.

Side Mirrors
Blind spot visibility is quite good in this car. My side mirror positioning allows me to see very far back on my adjacent lanes while still catching cars in my blind spot. Some cars can't do this at all. Model S struggles with this a bit. In Model 3, I'm way more confident with changing lanes without turning my head to check my blind spots.

Turn Signal Stalk
The turn signal stalk returns to neutral position after you use them to indicate. There are three modes of function; two of them are under the first detent, and one of them is at the second detent. A light, quick tap up or down will cause the blinker to flash 3 times. A light but sustained lift or press will blink until you release. Finally, a 2-detent lift or press will cause the blinker to blink until the turn is complete or until you cancel it. You can cancel it by light tapping in either direction. None of this will be intuitive for a while, but now that it's been a week, I'm reliably using the mode I intend. For Auto-lane-change function in EAP, you need to use the 2-detent signal for it to change lanes.

Why didn't they just use traditional stalk patterns? As always, the answer is that every function of the car is designed for the eventuality of a fully self-driving car. You can't have a stalk stuck in a blinker-on state if the car is in control of everything.

Enhanced AutoPilot
As I said before, this is the first time I've ever used AutoPilot, so this section is really geared toward people who also haven't experienced it. If you've used it on an existing Tesla, this section is probably going to bore you, and feel free to skip to the very last paragraph of this post. I've never used any traffic-aware cruise control either (TACC) so keep that in mind as well.

TACC works really well. Given that this was my first experience with it, I had zero trust in the car to stop, so I hovered over the brake pedal with my foot every time I approached a car. But it very reliably braked to either hold distance or come to a stop. My commute to work involves mostly a straight shot down a congested interstate, so TACC was doing its thing really well the whole time.

With Autosteer in the mix, this is where you feel like Tesla is onto something nice. Here in New England, we're coming out of the winter season, and the lane lines are worn from the plows and the sand/salt abrasion. In many parts of the road, the lines are completely gone. I've always wondered how AP would handle that. Turns out, it handles it just fine. Mid week, we had a foggy, rainy day, and lane visibility was non-existent to my eyes. I turned on EAP and surprisingly, the car stayed true to the lane the entire drive. I was so surprised I pulled out my camera to take a short video of the conditions. And that's when I noticed something interesting: my phone camera could see the lane lines better than my eyes could. For you photography buffs out there, if you've ever used a polarizer, you'll know that removing the reflective glare produces a picture that's more vivid than what our eyes see. That's what it felt like. In this instance, I bet the cameras on the car could see the lanes better than my eye.

When viewing this video, while it may seem obvious where the yellow lane stripe and the dashed white lane stripes are, I assure you that in person, my eyes could see neither; there was too much glare from the wet roads. There's some cool image processing going on here to dynamically enhance the contrast, revealing the lane lines. Recorded with a Google Pixel.

I'm not trying to say that EAP is perfect; clearly it's not, given the high profile accident with the Model X in California recently. But in some poor visibility situations, it performed way better than I expected it to. I am on firmware 2018.10.5, which does include the dramatic EAP improvements.

I was reading in some other posts that people were saying AP worked best in the middle lanes and to avoid the edge lanes. In my experience, the edge lanes did not challenge AP at all, as seen in the video above. Could be the new firmware.

With auto-steering, the firmware will nag you if it doesn't detect your hand on the wheel. I haven't pinpointed the exact interval, but it feels like 1-2 minutes. Here's where things can be tricky: lightly resting your hand on the wheel won't likely register with the car. That's because there are no capacitive sensors on the wheel. To get the car to feel your hand, you need to offer a slight bit of resistance to what the car is trying to do with the wheel. You can gently jiggle the wheel a bit or hold the wheel somewhat tightly to restrict its motion. If you hold too tightly and the car needs to make a turn, you'll disengage EAP. There is no particular place you need to place your hand on the wheel. As long as you gently resist the autosteering motions, it will reset the clock.

Auto-lane-change could be a nice convenience, but here in MA where the drivers are known as Massholes, it operates too slowly to be practical. For example, I approach a slow car and want to pass. I use my turn signal. It blinks and the car waits a second or two before passing. Meanwhile the car behind me is already frustrated and made its move, forcing me to cancel EAP and prevent the lane change. In other words, there's a certain driving style you need to adopt to fit in with the driving patterns here (and in other cities), and EAP is not aggressive enough. So likely I'll rely less on auto-lane-change for passing. Likewise with TACC, I have to set follow distance to the shortest, and even then, people cut in, forcing TACC to slow more to grow a new gap. If you can be hakuna matata / pura vida about it, then just let people cut in while you relax and let the car do the work.

Since I'm still new to all of these features, I feel like I haven't mastered the controls yet. And I haven't developed a high degree of trust in the car because there are plenty of situations I haven't encountered. We all need to be careful not to develop too much trust in the car, because that's when we get complacent, take our eyes off the road, and EAP encounters a situation it can't handle correctly. The result could be at best expensive and at worst fatal. Let's not let Walter Huang's death be in vain. Let him be a reminder for all of us to stay vigilant when using EAP.
Click to expand...

Called the service center for an update. They say it is still a problem with the 3 but only with a few Android devices. I have the Galaxy S8 which has a slightly different amperage on the hardware that is somehow not compatible with the rear usb ports...

H
Anyone actually get Overtake Acceleration on TACC working?

M
Is my Model 3 Autopilot learning?