My wife and I have a deal: whoever is driving, if the other says "STOP!" you slam on the brakes without question.

I had to merge into a really weird intersection: we came in at an angle to go over the LEFT side of a bridge. I couldn't really see to the right due to the angle. I had a green arrow, which was lit well before I even got there, but she said "STOP! STOP! STOP!" and I hit the brakes hard. I was going about 20 mph, and the car stopped VERY smartly -- and I definitely heard a bit of skidding (19" Michelin Primacy tires, fwiw). A very large pickup truck zoomed by, presumably going through a red light, and was maybe 18" from my front fender. He didn't even slow down or swerve. I'm guessing either on the phone, or drunk.

But she saved us from a pretty nasty collision 6 hours from home.

The takeaway is more than the driving dynamics: Consider making such an agreement with those you ride with a lot.
Reactions: The Duke, MIT_S60, Big Earl and 6 others
••• 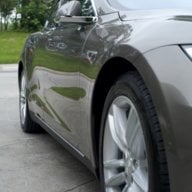 I have this rule with our grandkids when we go out for driving lessons. They may not see the danger that I see so when I yell STOP they know to hit the brakes hard. It's also a good first lesson to let them feel what happens when the brake is pushed hard. Initially they try to be gentle and smooth with the controls but the brake hard lesson on the first outing makes an impression that lasts. We combine that with looking far ahead so that even in a skid situation (ice/snow) they will be looking where they want to car to go.

My wife and I enjoy riding motorcycle two up and she is my second set of eyes especially when there may be deer in the country side. We rode two up at track day for a few years so her skills as a passenger are very high if we need to push the limits of the bike. She also has good visibility of the speedometer so I occasionally get a poke in the ribs when too high over the limit.

The distracted driver running a red light is all too common and there was a close call for us yesterday. Luckily I could see that he wasn't slowing so I delayed pulling into the intersection for my turn. He missed other cars by inches which hopefully was wake up call for him. Probably not.
Reactions: ThisIsTrue
•••
S

I'm not sure I'm seeing the title from the story given. You heard the tires skidding, but the car tracked with the steering and the antilock kept the car from actually skidding, right?

The couple times I've ended up in a full on panic stop with the X, I could hear the growl and feel the pedal shake from ABS. I wasn't ready for the way the pedal force dropped in the middle of the event (presumably from the car's emergency braking routine kicking in and the iBooster pushing harder.)
•••

Saghost said:
I'm not sure I'm seeing the title from the story given. You heard the tires skidding, but the car tracked with the steering and the antilock kept the car from actually skidding, right?
Click to expand...

I felt NO chattering in the brakes (like I've felt in other cars with ABS). I indeed heard some skidding, but I was only going about 20, so it wasn't like I left 20' of rubber on the road.
•••
M

Dashcam or it didn't happen. Or, if it had been a crash instead of a near-miss, a dashcam could have proved your innocence to insurance/police.
•••

2
Is FSD Beta responsible for total destruction of this 2020 Model S?