7.0 Updates besides the AP feature 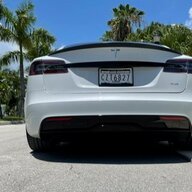 AP is great, I'm sure it will get better as Tesla will collect massive amounts of drivers' data to feed their AP algorithms. But I must admit I'm equally pleased with some of the other upgrades 7.0 has brought along. The A/C is much colder and appears to run at a bit higher RPM. I ended up adjusting the interior temp from 67 to 72 degrees and I now feel cooler than before the update.

Also, I feel the car giving much more initial torque at higher speeds. 20mph+ has more initial torque when you ask the car to go! The accelerator response is stronger than before (P85D). I wish I had run some acceleration data before the update to compare what the car is giving now. I would describe the difference by comparing a turbo charged ICE motor in warm humid weather to the same ICE engine in cold dry weather.

I really like the set-up in stop and go traffic. No more having to worry about pushing the accelerator after a few seconds of a complete stop. With 7.0, the car handles the flow of rush hour traffic the way I envisioned. Even without auto steer, this is one of the main reasons I bought this car. Now you just hit AP and you seamlessly cruise along with all the other miserable manual-transmission ICE commuters. Takes a huge chunk of stress out of rush hour traffic.

I've got a pretty abrupt lip at the edge of my garage which has always been an issue when backing in very slowly. I had to apply too much power to get over it, resulting in a fast acceleration in a very confined space. The new modulated response at low throttle is very welcome.
•••
S

I agree that the AC system is much more responsive and I too had to adjust the temp upward to feel comfortable. The directions list on the left side of the nav screen and header bar seems to have more transparency which I like.
•••

A tiny thing to be sure but I like the new easier way to lock the doors after getting in the car. Sometimes when parked in sketchy areas my paranoia enjoys just having to hit one easy to find button (the lock icon in the upper left corner of the touch screen) to quickly lock all the doors.

Now if they'd just offer there option of having only the driver door handle present when approaching the vehicle...

One other thing I just remembered is the "hill hold" feature (not sure if that's it's official name) that keeps the car from rolling forward or backward when in drive and stopped at a stop light.
Last edited: Oct 17, 2015
•••

Now if they'd just offer the option of having only the driver door handle present when approaching the vehicle...
Click to expand...

JenniferQ said:
That would be very nice.
Click to expand...

The local (SLC) service center says they have several requests for that.
•••
S

J
2022.4.5 promises non vomit inducing AP stop and go driving in the release notes. But it seems the same to me, am I missing something?

F
I can't wait for the next update! Phantom braking is driving me nuts.

9
Car drives different since holiday update. You guys notice anything?