You are using an out of date browser. It may not display this or other websites correctly.
You should upgrade or use an alternative browser.
X

I thought I would share this as I picked up from Southampton today and as the friendly and helpful guy there explained, they are not set up to do it so the signage is poor and the process is not fine tuned. I was just happy to get my car, it is awesome and I'm so glad I stuck with it thru all the doubts I had about dealing with Tesla in the early stages of the order, and now, the current unprecedented situation around the world.
Anyway, main reason for the post - if you are picking up from there, my directions were non-existent so it was turn up at the port and wander around until I found someone.
Following the sat nav to the postcode did not work for us - so try this.

The process itself is brief, there is no handover to speak of as they are not geared for it and I spent a frustrating time trying the get the car to open, and then start, before I realised you have to double click the 'roof' of the key to make it unlock - obvious really

Apart from that and the stress of not being able to find the right place to go, it was brilliant to have been able to get the car despite the lock down, and to not have had to drive all the way to Bristol considering Southampton is relatively local to me. I took loads of precautions, wiped the car down, cleaned my hands etc etc - I did have to stop a couple of the dock workers I approached for directions from coming too close to me but that was the only real exposure risk I faced.

The end result was well worth it, all the shut lines look straight and even, everything I have tested so far works, you have to let the cameras calibrate for the first few miles before cruise control will work and mine was set to kph until I pulled over and changed it.

Someone else mentioned about wireless charging, mine works and the holder fits my Galaxy Note 9 just fine. I was thinking it was worth putting it in the holder anyway, as the first time you decide to launch it off the lights you won't have to pull over afterwards and retrieve your phone from the boot! (and no, I wasn't racing and did NOT exceed the 40mph speed limit! - it was still so much fun, someone else did say it makes you regress to your childhood and I'd have to agree).

I have mine sat charging in the drive and even if I don't get to drive it very much in the near future I am still very happy to have it
Reactions: Penfold, *Adam, Roy W. and 3 others 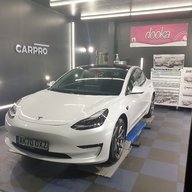 I'm hoping to collect my TM3 LR from Southampton; was wondering if anyone else has collected from here recently and what their experience was?
A

I collected from Southampton last month; found collection really awesome / easy. They have a temporary show-trailer thing setup so it has an outdoorsy car park feel

Although directions are a bit poor for collection, weirdly for the test drive directions to the same place were great (!). Enter Southampton port, stop at the security office to tell them you’re there for Tesla pickup, then right at the roundabout - drive on until you see the Tesla flags outside on the right.... you’ll probably spot the cars before the flags of like me you’ve been staring at pictures for ages!

pickup @ Southampton went great though, and only a single tiny defect found - bonus! (little tiny scratch which I was ok overlooking).

They told me they avoid the bigger handover now to stay contact free (except key handover!), and explained a bunch of stuff then said either drive off or just shout them over if I have any questions, and to take as long as I like.. I kind of preferred this to be honest... I got to play and follow the checklist and get comfortable, then zoom off!

Thanks for the swift update - assuming I can get the collection scheduled here, will post my experiences (my order was placed back in May but scheduled for after October 24th and Southampton was not an option at the time).
N

I placed my order for an M3LR in mid-April but COVID prevented any reliable delivery date being offered.
I enquired about a test drive and was offered one from the newly opened Southampton Delivery Hub in mid-July.
After my test drive I mentioned I had put "collect from West Drayton" on my order but now the Southampton Hub was open I could collect from there instead - they changed it for me.
I eventually collected my car on the 7th September - there was no rush and they were very helpful.

The UK and Ireland Apr 28, 2021
EddyM2
E
T
The collection experience and advice