Background: I'd bought the Model X 100D in March 2018 with the standard audio system and was thoroughly underwhelmed by it. It literally sounded like I was face deep in mud.

I looked around at the forums and saw that Reus seemed to be the most popular choice for the Model S owners and didn't see too many Model X owners come forward with their experience, so here goes.

Reaching out: I called the Reus Systems business number and was patched through to Cliff. Cliff said he won't be in the Bay area for two months but suggested I make the trip to Orange,CA to best get a sense of the before and after. And I'm very glad I did that.

Following the first call, Cliff forwarded the Model X price sheet to me. You basically get to choose from 4 levels. The prices are
2996$ (8" woofer, upgraded tweeters, additional speaker, extra cost for woofer control knob)
3996$ (10" woofer, upgraded tweeters, additional speaker, control knob included in price.)
4496$( same as above but with "premium" tweeters)
5996$( all inclusive hi-fi)

I was choosing between the level 2 and level 3 system when Cliff suggested I go for level 2 as it was better tuned for listening to anything from compressed to lossless tracks.

The installation: Dropped the car off at 9AM at their shop and was asked to return in 5 hours. Rick, Cliff's partner, demoed me the "best" off the shelf speakers and tweeters(focal, burmeister) and compared them against Reus' in house versions. I was properly surprised at how much of a difference there really was.

When I came back, I didn't really know they'd completed the installation at all! The Woofer module was mounted in the rear trunk cargo area, taking up 40% of the width and 80% of the height. The amplifier was mounted under the driver's seat with proper trim coverings, but I could see it clearly when sat in the rear seat.

The woofer control knob was mounted under the central screen inside the little storage cubby, off to the side. Beautiful. Then they showed me the center speaker, it was mounted on the rear view mirror in such a way that it looked like it had been designed that way all along.

Cliff plugged in a USB demo audio stick and waited until the crew gathered around me to watch my reaction (apparently it's what they do for in house installations, I gathered later). When the first track played, I involuntarily let out a gasp, it blew my mind.

Suffices to say the drive back had me discovering layers to songs I never knew existed. I ooohed and aaahed my way home. Now my X is off to SS Customs in the Bay area for a full body Clear Bra, Powder coated 20" wheels and red calipers .

Go with Reus. They know what they're doing.

I think your Tesla will be in safe hands compared to a dude who installs window tint and stereos from the same store.
Reactions: Magus, rw99, Cowby and 1 other person
••• 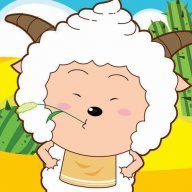 sounds really pricey. I hope it was worth it, which it sounds like it was.
•••
O

Almost sounds like an advertisement. My standard sound system is very good, especially after adjusting the equalizer
Reactions: inconel and wallstguy
•••
P

Background: I'd bought the Model X 100D in March 2018 with the standard audio system and was thoroughly underwhelmed by it. It literally sounded like I was face deep in mud.
Click to expand...

I haven't heard the standard Model X Audio, but the premium Audio in mine is pretty awesome. I haven't heard of too many complaints with the standard system unless faulty e.g. speakers not wired in correctly etc.
Reactions: Magus, inconel and xyeahtony
•••

My other car is a Jaguar XF with its 400W Meridien sound system and MX barely held a candle to it in a side by side comparison. This was very unacceptable for a $100K+ car. I heard the UHFS system too and it still was nowhere near to the Jag. So happy I didn't get the $6K Prem Upgrades package (the only thing I felt I needed from the package was the sound system).
•••
R

Only the tweeters are replaced? All the other stock speakers are still in use? Or does “tweeter” just refer to any stock speaker?
•••

The A-pillar tweeters are replaced. An additional tweeter is added to the back of the rear view mirror. Its added to the back so the sound reflects off the windshield and onto the passengers. The is an amplifier mounted under the driver's seat and a 10" subwoofer to the rear cargo floor.

Reus says the stock speakers on the Tesla are better than most off the shelf ones available but only for a certain range of frequencies.

They spent close to 90 minutes after installation, tuning the car audio playing a vareity of genres. The equalizer settings on the car itself is set to 0 for everything.

To quote Cliff, the owner, "We want the audio to sound as if the artists are singing from just above the center screen and the instruments are playing somewhere near the headlights."

I've uploaded a few images here. I wish I could upload an audio clip to show just how awesome it sounds.

This is where they mounted the subwoofer control knob: 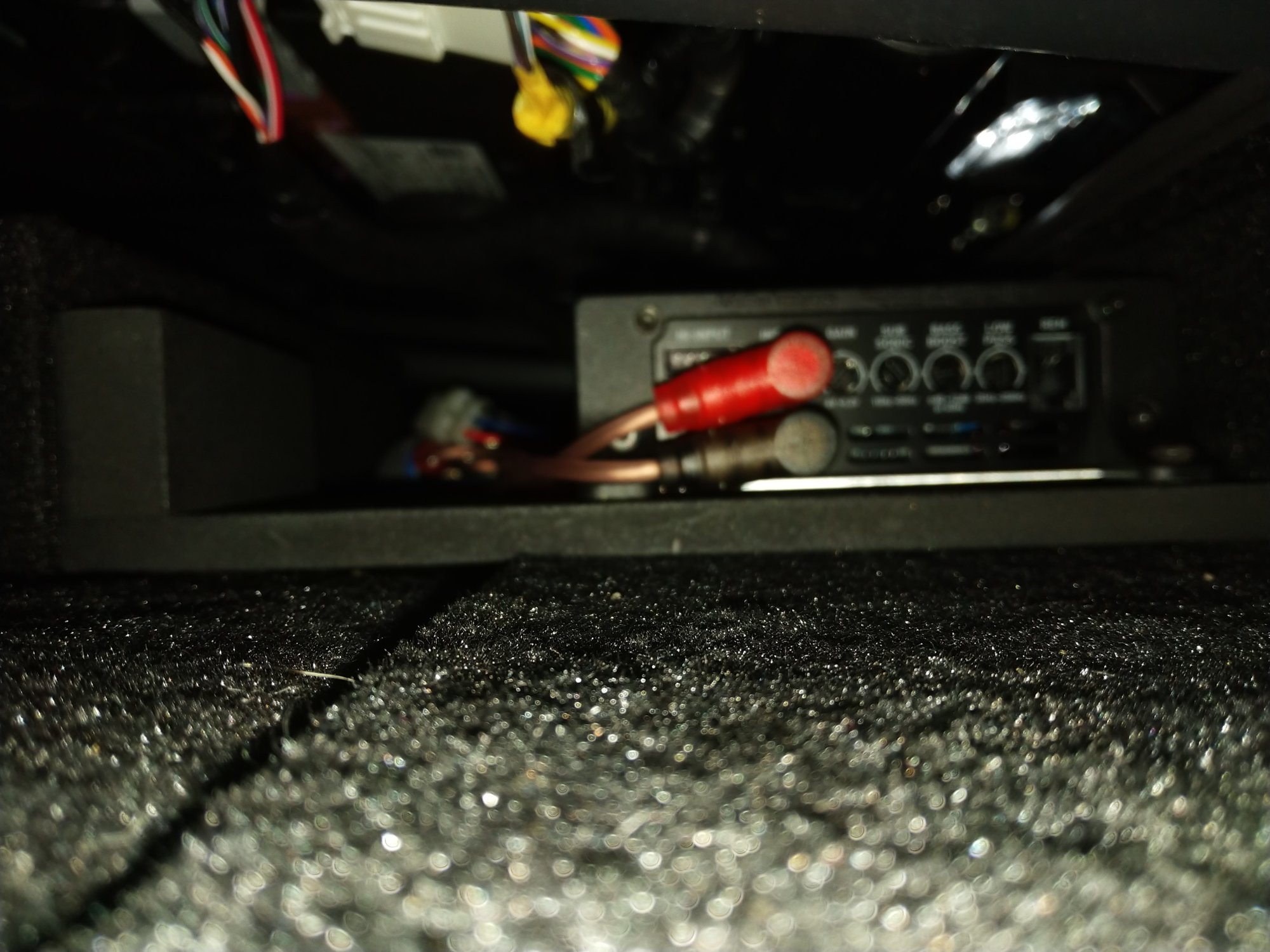 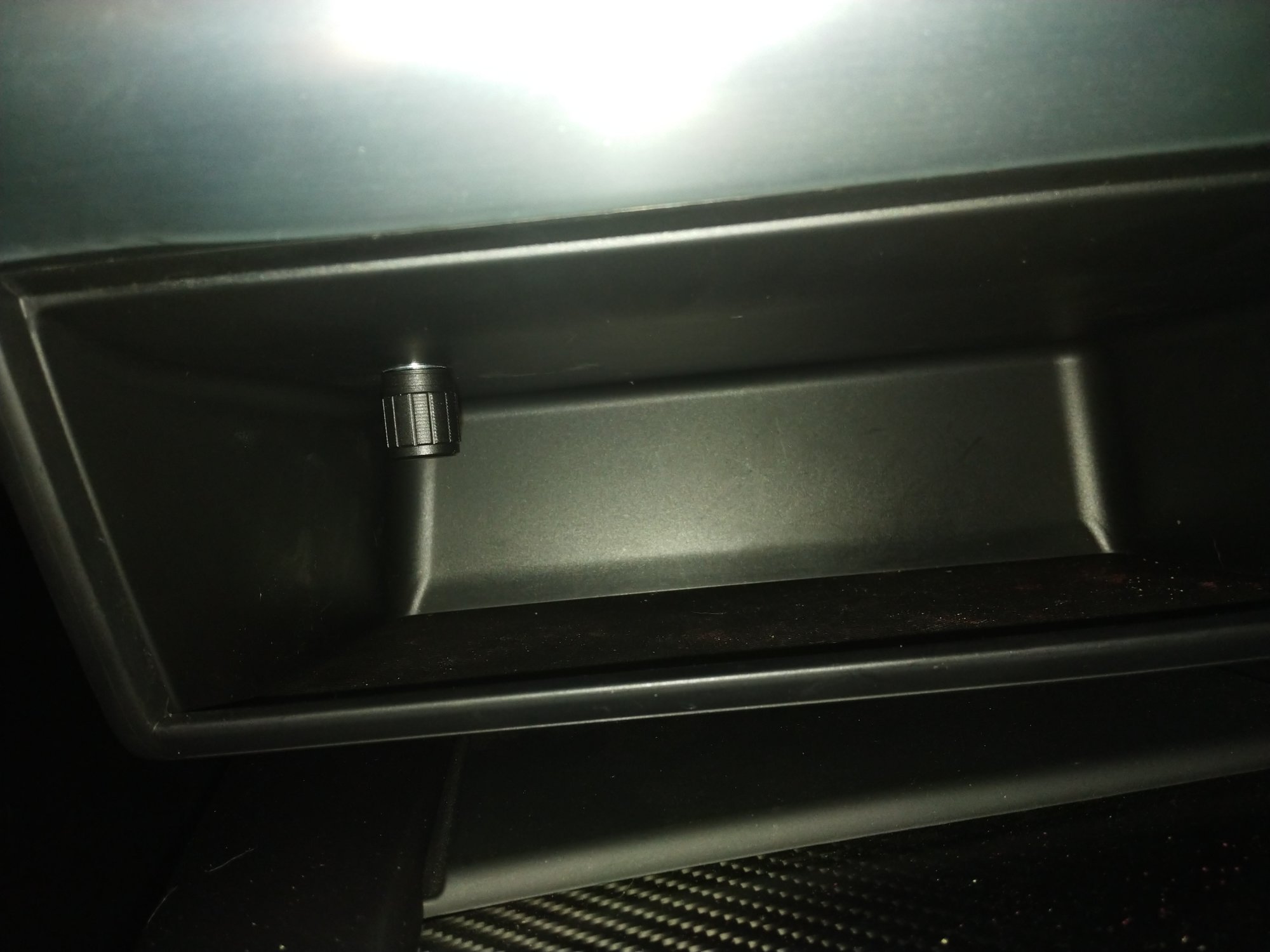 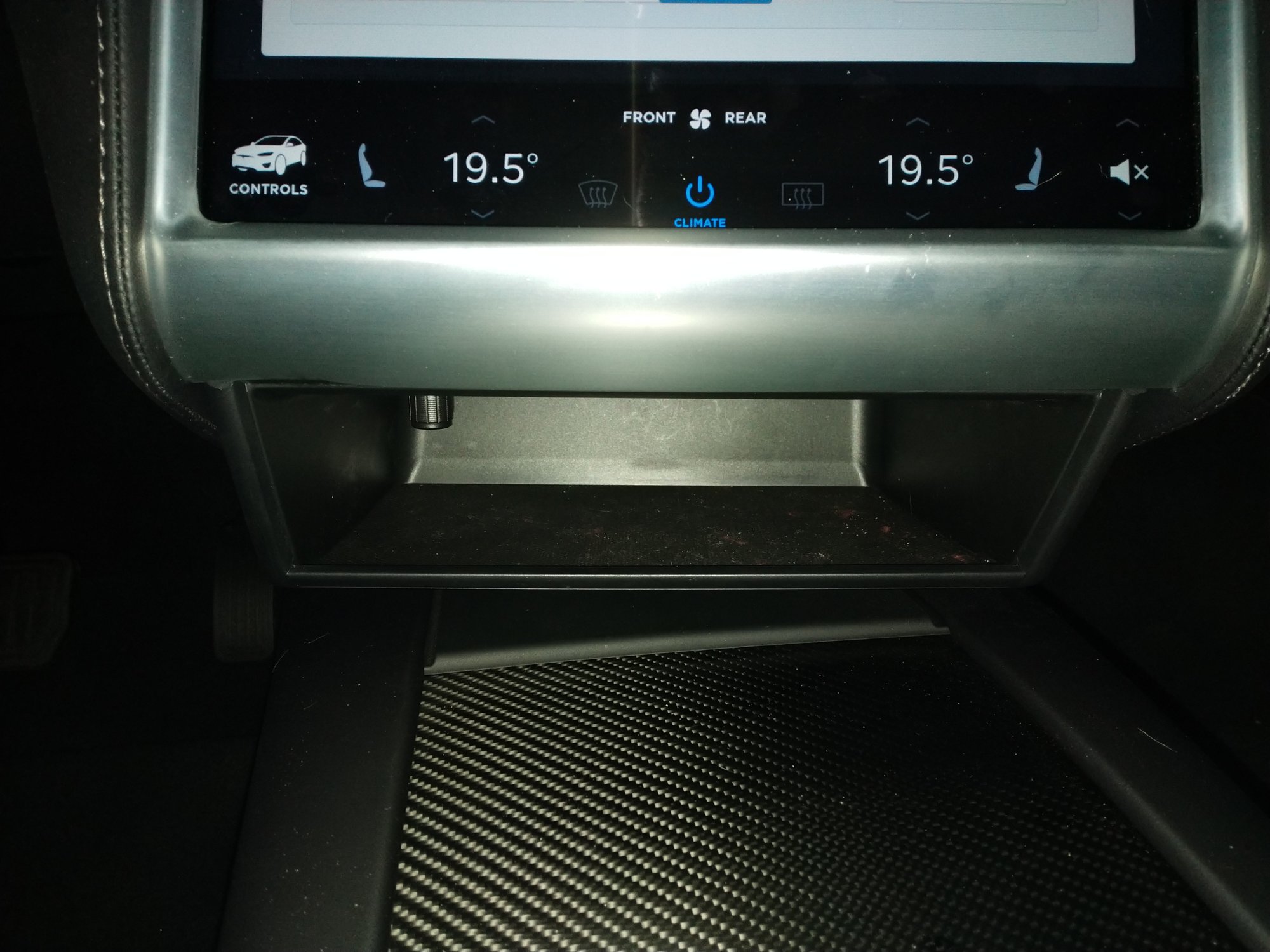 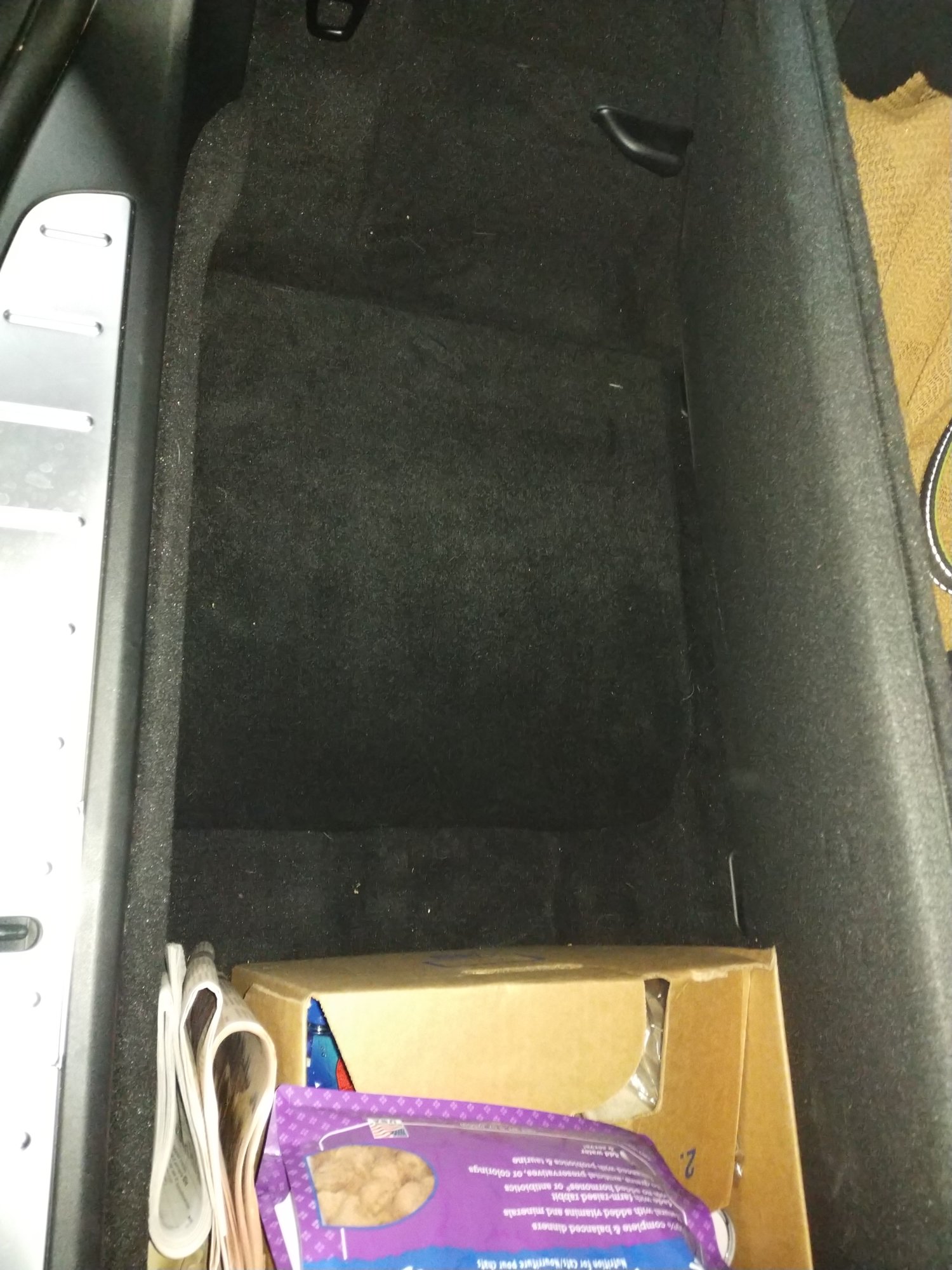 You didn't post a picture of the speaker under the rearview mirror... Also, do you know whether or not they have to remove and remount the cameras to put that speaker there? Removing and remounting the cameras would make me nervous from a calibration standpoint (and if recalibration was needed, it wouldn't necessarily have to be covered by warranty).
••• 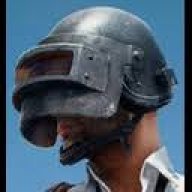 Puritan - I'm considering the Reus upgrade as well for my 2017 X with base audio. I'm disappointed with the base; muddy as you described. I'm thinking about going with Level 1 (cheapest), do you think the smaller sub is sufficient for someone that doesn't need crazy bass? Also, would you be willing to take some additional photos of the sub, amp, center tweeter, etc? In my case, I have to pay for him to come to Minnesota so I'd like to know exactly what to expect. I talked with Cliff and Rick and both guys seems very knowledgeable but I'm trying to get as much info before I make an expensive decision. Thanks!
•••

@mxnym no, they did not touch the cameras. Just removed and remounted the rearview mirror. I'll post those pictures tomorrow.

@ahkim I'll post a few more pictures tomorrow. The 10" subwoofer I have is unbelievable. Never once sounds jarring even with the volume at 11. Given that, I still think you'll be more than happy with the base, Cliff and the guys really know what they're doing.

As I'd mentioned above, I had the upgraded Meridien sound system in my Jaguar XF and thought it was mind blowing. It was the primary catalyst to drive down to Reus for the upgrade rather than wait. The upgrade has ensured the Jag is barely being driven now. It takes a couple weeks to break in properly, but I guarantee that you won't regret it.
•••

@puritan Can you confirm the number of speakers in the base stereo?
When you get the chance, please post some photos. Did they create a custom sub enclosure?
•••
M

ahkim said:
@puritan Can you confirm the number of speakers in the base stereo?
When you get the chance, please post some photos. Did they create a custom sub enclosure?
Click to expand...

Pretty sure you can see a custom sub enclosure in the last photo already posted. Specifically, it looks like a carpeted hump in the bottom of the under-floor cargo area on the driver side.
•••

mxnym said:
Pretty sure you can see a custom sub enclosure in the last photo already posted. Specifically, it looks like a carpeted hump in the bottom of the under-floor cargo area on the driver side.
Click to expand...

@puritan - I'm probably going with a local installer since Reus is backed up for a few weeks/months. My local guy spec'd a 12" JL Audio sub, do you think a 10" is enough? Thanks!
•••
L

ahkim said:
Yep- I see that now. Thanks.

@puritan - I'm probably going with a local installer since Reus is backed up for a few weeks/months. My local guy spec'd a 12" JL Audio sub, do you think a 10" is enough? Thanks!
Click to expand...

Will this install void the warranty in any way?
••• 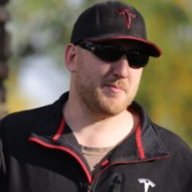 Upgrade the batteries for even better sound performance improvements! Go Lithium! You don't have to reprogram or do anything fancy or special, just drop in replacement, they are available, just look for one! The increased capacity and Lithium chemistry both contribute to a big reduction in voltage sag, reducing voltage sag leads to a way better sounding stereo!
•••
G

ahkim said:
@puritan Can you confirm the number of speakers in the base stereo?
When you get the chance, please post some photos. Did they create a custom sub enclosure?
Click to expand...

There is also a central speaker.
•••