Terrible headline for the article that gives the wrong impression of what is actually happening. SpaceX will be taking over a property next door in 2020.

The industrial property is mostly leased by Triumph Group, which manufactures military and commercial airframe structures.

SpaceX leases the remaining 350,000 square feet of the facility, and has inked a 10-year deal to take over Triumph’s space once that company’s lease ends in 2020, according to sources.
Click to expand...

And that is not the biggest building in that area. It looks smaller than SpaceX's current headquarters.
I was going to attach a screen shot, but I'm getting a cryptic security error thrown at me.

Oh wait, 3901 actually has “3901” printed on its roof, and it is the massive L-shaped building. The biggest one on the block, about as long as a third of the runway next to it.
••• 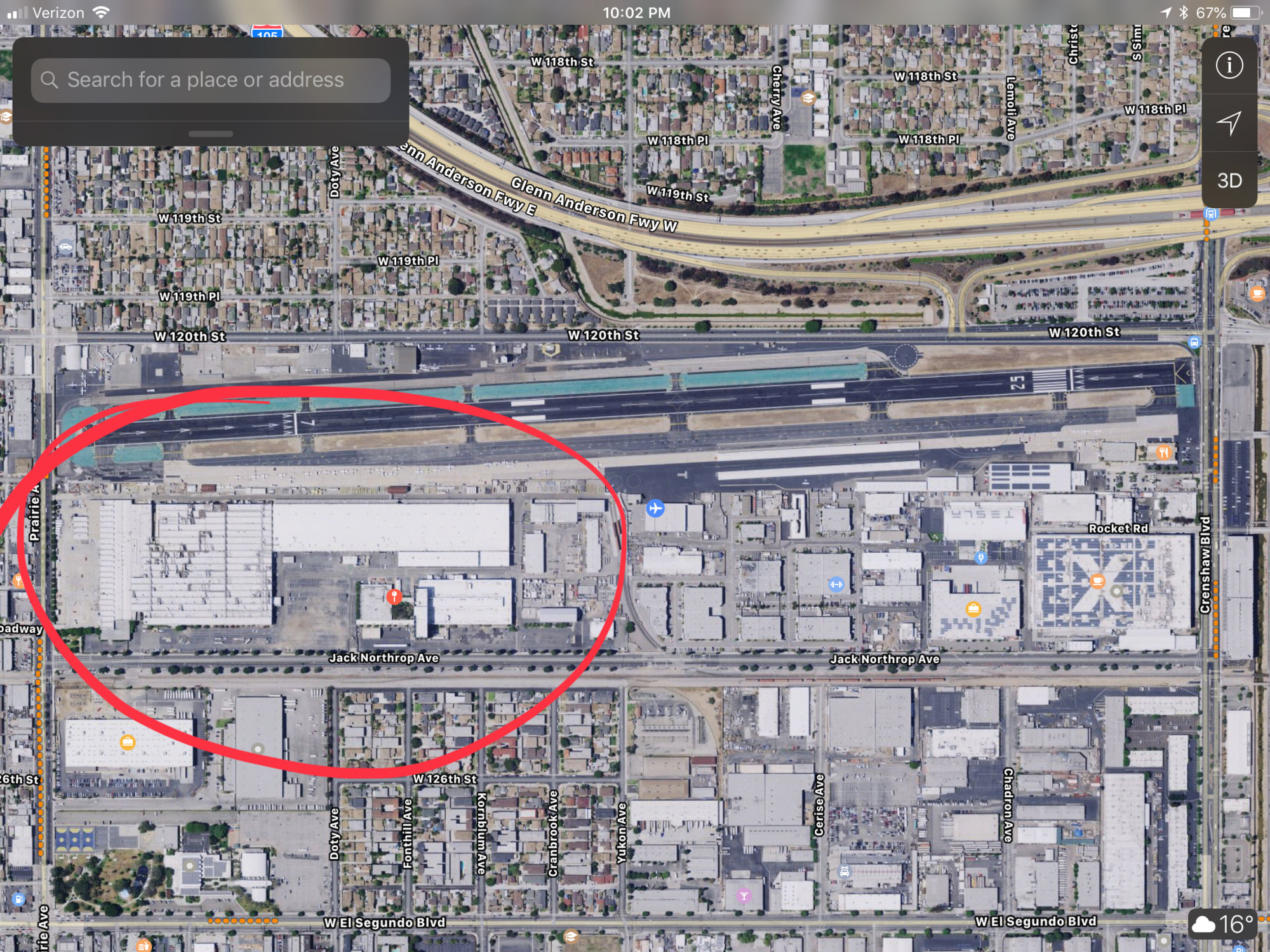 If you are looking for SpaceX's current headquarters, X marks the spot.
(I'll show myself out)
Reactions: TonyPham, TaoJones and pilotSteve
•••

The address on the roof of the big building: 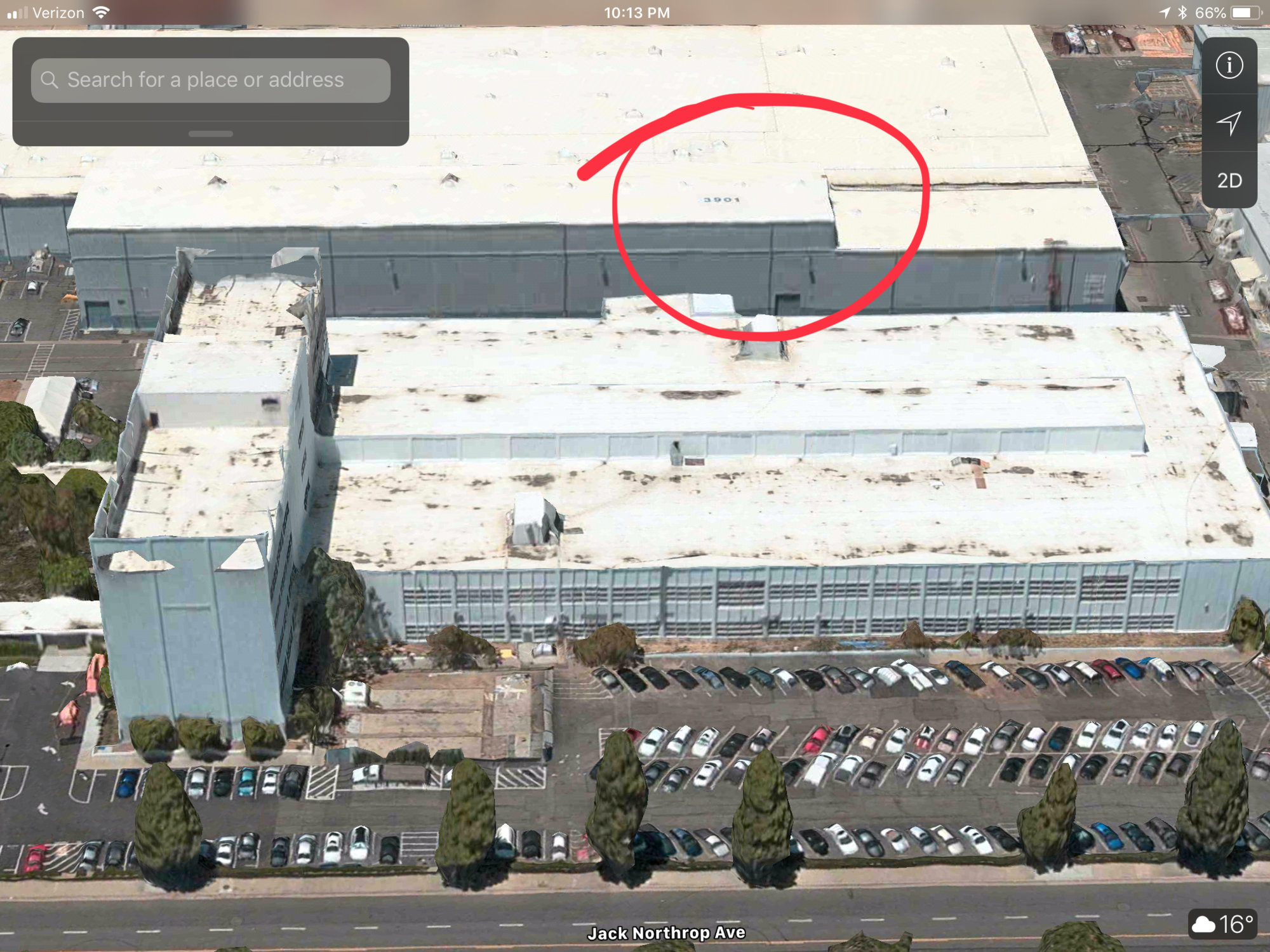 There’s a sign at one of the Triumph entrances that says “No SpaceX employees past this point.”

Maybe they’re pissed at losing a lane of Jack Northrop to the Hyperloop prototype tube.

Or it’s a parking thing. Pretty tight thereabouts even with the new garage being done.
•••
E

e-FTW said:
The address on the roof of the big building:
View attachment 299862
Click to expand...

I am surprised and intrigued by this news that SpaceX will be leasing vast amounts of additional space close to their current location. A guess is that it could be used for production of BFR sub-assemblies and Raptor engines that can then be moved by road to the new Port of LA location for integration into the vehicle. But that location appears to have a lot of space; couldn’t the entire vehicle be produced and assembled there and wouldn’t that be more efficient?

So could this additional space in Hawthorne be used for F9 and FH production? Given that we know (per Elon and Gwynne) those vehicles are going to be phased out in favor of the BFR that space doesn’t seem necessary. The final batch of Block 5 boosters are probably going to be built over the next couple of years and then that will be it except for 2nd stages as needed and Dragon capsules. I would think that could be done in the existing facility. But maybe SpaceX is anticipating the production capacity needed if they capture the vast majority of the commercial launch market in a few years (which seems quite possible at this point).

Obviously I am simply speculating based on absolutely zero expertise in the aerospace industry and no inside information.

P.s. From 1965 to 1968, when I was in junior high school, my family lived in a house less than 2 miles southeast of where SpaceX is currently located. At that time, I believe basically all the buildings on the south side of the airport runway were occupied by Northrup.
Reactions: e-FTW
•••

The building that says 3901 on the roof is the airplane manufacturing building. So that could be used for additional manufacturing space. The section on the end facing Prairie looks like offices with a loading dock section attached.

Grendal said:
The building that says 3901 on the roof is the airplane manufacturing building. So that could be used for additional manufacturing space. The section on the end facing Prairie looks like offices with a loading dock section attached.

Really big. SpaceX is becoming the Boeing of rockets fast.
Click to expand...

I also thought those were loading docks. Turns out the whole building is angled roof sections. Even more puzzling: is that high enough to move rockets about? 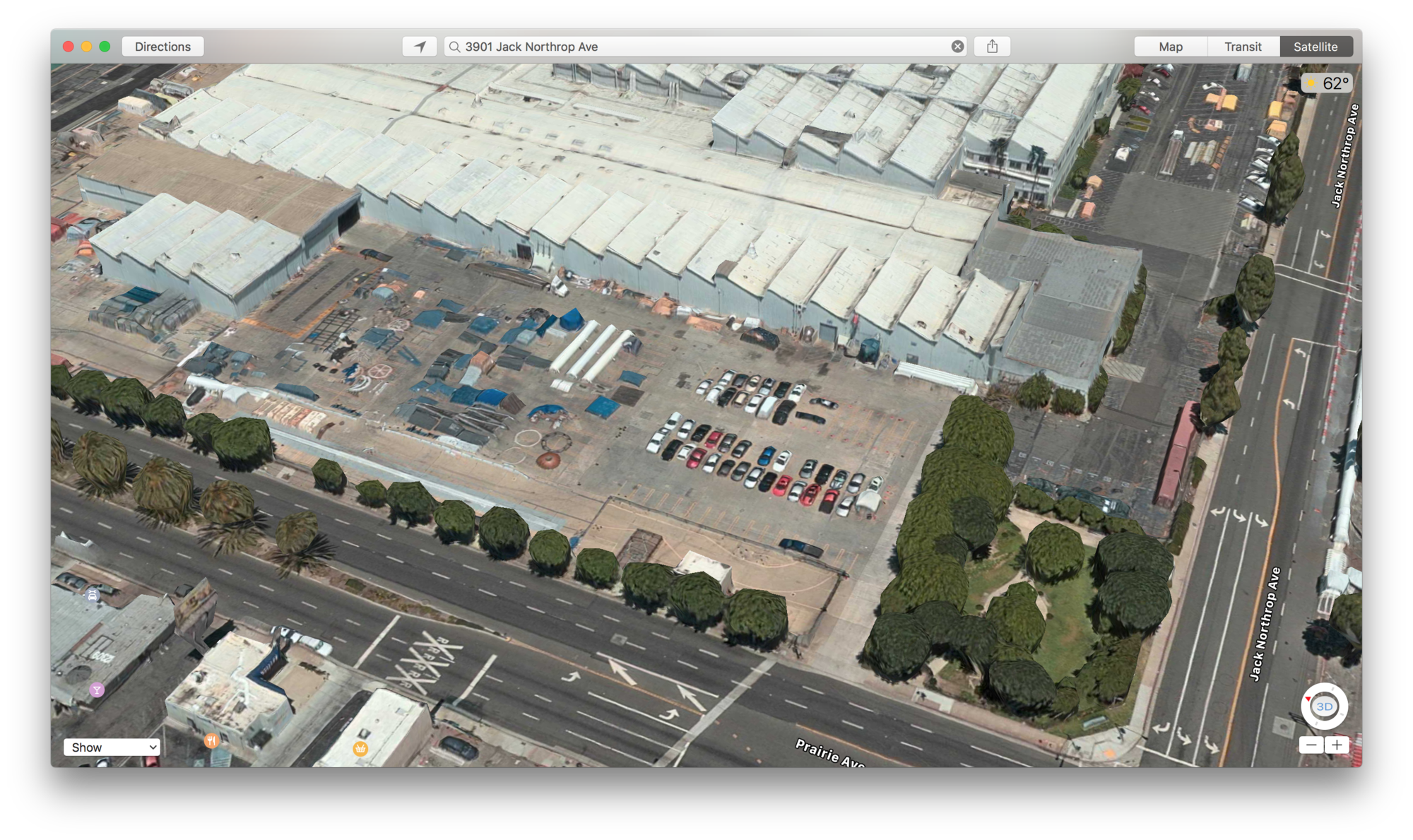 e-FTW said:
I also thought those were loading docks. Turns out the whole building is angled roof sections. Even more puzzling: is that high enough to move rockets about?
Click to expand...

I agree with ecarfan that this will be used for BFR/BFS subassemblies or the main factory will be taken over by BFR/BFS and F9/FH will be moved to this facility since they aren't nearly as large.
Reactions: e-FTW
•••

Grendal said:
or the main factory will be taken over by BFR/BFS and F9/FH will be moved to this facility since they aren't nearly as large.
Click to expand...

Hmm...that’s an interesting possibility that had not occurred to me. But I assume it would be a lot of extra work to shift F9/FH production over to a different building, even one so close by, as opposed to simply starting up BFR/BFS subassembly production (of relatively small components that can readily be moved by truck) in a new location and keeping the F9/FH production where it currently is.

Or as @e-FTW notes, this new space (which SpaceX won’t occupy until 2020) will be Hyperloop related. Which would be awesome. I think Elon has become annoyed with how slowly the other Hyperloop companies are progressing and, as usual, thinks he can move forward much more quickly.
Reactions: e-FTW
•••

The Boring Co. is getting serious. And Elon just tweeted that they hope to start work on the LA to SF tunnel next year and it will be a true Hyperloop system.

I am wondering if the new SpaceX building lease this thread is discussing is indeed Hyperloop related.as @e-FTW speculated.
Reactions: e-FTW
•••