How bad is M3 paint in reality?

my white has a pretty neat undulation of yellowish/gold on all the doors that can be seen under specific light conditions. It's pretty trippy really..
T

TL;DR- As others have expressed, YMMV with paint quality, regardless of price point.

If you have an eye for detail and the delivery is in good/bright conditions, you will see some issues, guaranteed. I have never seen a Tesla with perfect paint, even post-correction. I've seen hundreds up close now, as I work across the street from the north Scottsdale SC, and periodically stop by to snoop on quality of new vehicles they're delivering there, and at the nearby overflow in shopping area to the north. Plus, I wanted to see a Y in the flesh ASAP...

In Tesla's defense, I have also seen numerous nibs, runs and other similar paint flaws on freshly detailed Porsche 911 turbos, McLaren 720S & 670LT, M-B, and BMW vehicles on dealer lots this area too. (I love cars/trucks of all kinds, and have had hour lunches to kill for 12+ years up here...) I've also seen TLX/MDX, Camry and Jetta with nearly flawless paint, save for some light orange peel texture. In my opinion, the best paint quality is on the Rolls, Bentley, Jag, Aston, Acura, Lexus and VAG vehicles, roughly in that order. Seen some real nasty stuff, mostly mismatch bumper or fascia inserts on M-B, BMW, and other brands, with Honda & Nissan being by far the worst for mismatch and peel texture.

Honestly, the best Tesla build quality I have witnessed to date is my coworker's 2013 model S, with flat white paint. His nearly 90k mile car is super solid, WAY better built than either of the model S loaners I've had or the brand new S P100D I drove as a fresh test drive car. So much better built than my 3 that I won't even compare, its just not fair. His battery degradation is not worth mentioning either, and is still rattle free save one minor intermittent rattle with dash trim on passenger end. He never fixes it because he can't hear it and doesn't care, lol.

My car is a whole other story though...

My blue 2019 SR+ was full of aesthetic issues on delivery:

(I know, I should have refused it, but needed car that second. Long story...) 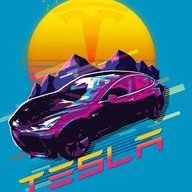 Redbrick said:
my white has a pretty neat undulation of yellowish/gold on all the doors that can be seen under specific light conditions. It's pretty trippy really..
Click to expand...

Tesla owners have learned to accept specification defects as unique features.
I should stop reading the forums until my m3 arrives.... at least...
C

My 2020 white M3P I took delivery in August is fine, had minor quarter coin size paint correction fixed up fine. just think there are 10's of thousands Tesla owners that are happy with their paint that are not posting here.
R

thewallaby said:
Tesla owners have learned to accept specification defects as unique features.
I should stop reading the forums until my m3 arrives.... at least...
Click to expand...

Also I think the panels of the car are aligned to keep the car balanced for one occupant...perfect. The assembly is also another wonder to behold...it's built so that you can also share your love of the car by participating in it's construction...you get to finish off...or visit their awesome service centers. Their appointments are worry free and hassle free just by a few taps and pictures from your phone.
Reactions: Tres_Azul

M
How much could this minor paint damage cost to fix?

Sold my Tesla yesterday - No Sellers Remorse Yet