New shoes for the P85D 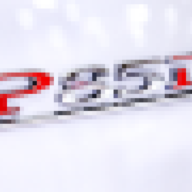 My P85D was delivered back in June. I didn't like the look of the OEM 21" wheels and I was told that staggered 21" tires were no longer being offered when I put my order in. Plus I thought I could do better in the aftermarket for the $4,500 that Tesla was charging for the 21" wheel and tire package. So I just ordered with the stock 19" wheels and tires and began planning my own 21" setup.

I had originally intended to go with Michelin Pilot Super Sports for the aftermarket upgrade, but the inventory was almost non-existent in the size I needed. Even if we had found a set, replacements were going to be a question mark which didn't sound like a very smart move with a staggered setup.

For wheels, I went with Niche Essen- M146s in 21"x 9" in the front and 21" x 10.5" in the rear. I agonized over black (M147) vs. silver and ultimately decided silver was more in keeping with the Model S's lines and trim even with the P85D's smoked rear lights and carbon fiber spoiler.

I'm very pleased with the result.

Having now driven 2000 miles with the stock 19"s before switching to aftermarket 21"s, I have to say that the larger and firmer rubber really improves the road feel and handling of the P85D. It's going to be hard to switch back for winter.

I'm also pretty sure that at some point I'm going to have at least one major blowout from piloting the 21"s on the terrible roads we have here in Long Island. I managed to do that twice with my prior car on 20"s so it's not like I've never experienced that thrill. Price of admission, I suppose. 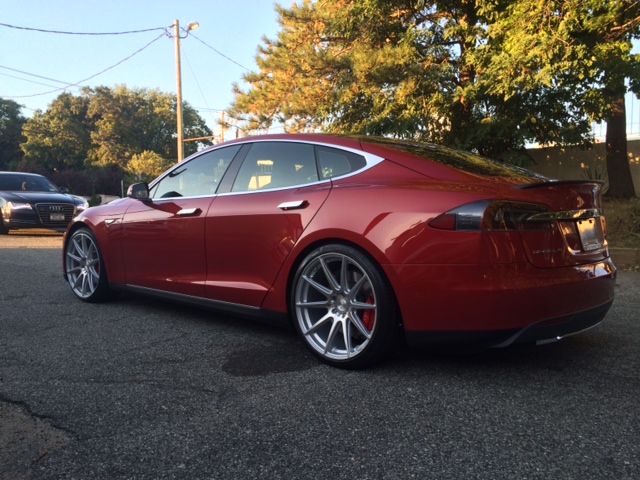 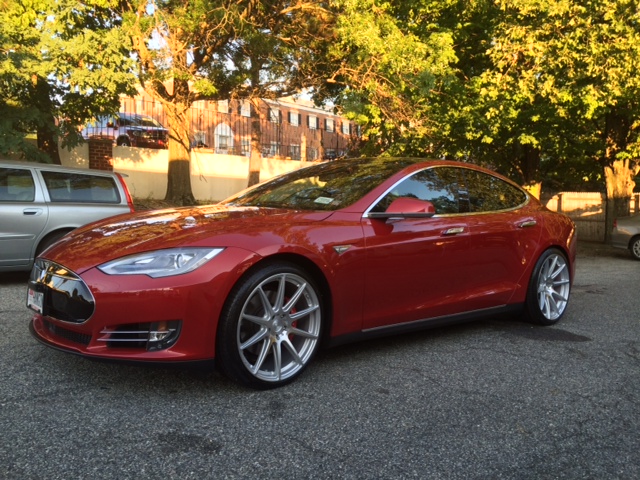 Law...The "S" looks amazing! and the silver wheels where a great choice.
•••

I actually think the dark OEM 21s go very well with the Red. It's a personal choice, I guess.
•••
W

Law&Disorder said:
Plus I thought I could do better in the aftermarket for the $4,500 that Tesla was charging for the 21" wheel and tire package.
Click to expand...

Where you able to pull this off for less than Tesla was asking for their 21" setup?
•••

Wojski said:
Where you able to pull this off for less than Tesla was asking for their 21" setup?
Click to expand...

Yes, but barely. Not being able to find the Super Sports in the right size was a budget buster. I ended up at $3,915.78 including tax. My wheel guy ended up reusing the TPMS sensors so I saved a couple of hundred there.
•••