Parking lot attendant scratched up rear of my car

As the title of the post states, gave my car to a NYC parking lot and when I paid for the parking and walked to the car to drive off noticed the multiple scratches/gouges of the paint in the rear right of the car. I filled out the claim form that the attendant gave me, he and I both took pictures, and was also able to take a picture of the rear of the parking stub when I checked in showing that there was no prior damage to the car. This is the part where they mark off damage on their form. I have to wait a few days for them to contact me now. I have a copy of the claim form and receipt I paid for the parking. No panels are dented, no warning signals on display meaning the rear sensors are OK, just long deep gouges in paint.

Does anyone have experience with this stuff? Do I need to take the car to a special body shop that can do Tesla paint? Car is a 2021 M3, pearl white clear coat. I assume the parking lots co will want a few estimates, that is no problem.

Good luck, but I would never trust a car of mine to any parking attendant or valet because of two experiences.
1. In 1980 I owned a Chevy Chevette - a total piece of crap, but all I could afford at the time. I lived in NJ and had friends in NYC.
One cold winter nite I drove into the upper east side of Manhattan to see those friends. I had been listening to an FM rock station
as I pulled into the parking garage. I turned over my keys, got my parking receipt and went to meet my friends. When I went to pick up
my car several hours later, the first thing I noticed was that the radio was tuned to an AM station that I never listened to. The second thing I
noticed was that the heat was blasting. If the car had been with the engine off for several hours, there would have been no heat at all.
2. A friend of mine who lives in L.A. had a new Jaguar sedan. He went drove it to dinner at a very upscale restaurant and let the valet park it.
When he left he just got in on the driver's side and left. But the next morning he noticed a crease on the front right side of the car.

If you've ever seen how tightly they pack the cars in NYC garages, that would be another reason to avoid them. I rarely go to NYC and haven't done so in my M3. But when I do drive there, I make a point of parking in the Lincoln Center Garage, where you can self park. It's also cheaper than most other garages
Reactions: calidreamz808
••• 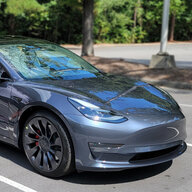 Willy’sEV said:
Do I need to take the car to a special body shop that can do Tesla paint? Car is a 2021 M3, pearl white clear coat. I assume the parking lots co will want a few estimates, that is no problem.
Click to expand...

Was your dashcam and Sentry turned on? It would have recorded either the attendant's bad driving or your car being struck by another while parked.

My Sentry is "sorta" working, and my Dashcam will not record at all. This is the last issue on my new car that I am trying to get resolved.
•••
F

Also, check your maintenance logs. Go to Service menu and touch Notifications. Look for any messages that may have occurred in the window they had the car.
Reactions: Taxvictim
•••
T

don't valet unless it's a rental - or - an ultra luxury car they'll park for show right in front of the place rather than attempting to squeeze into some super narrow spot with an 18yr old at the wheel...
•••
W

I am not concerned about the blame here, they did it, and we have proof of it.
Just wanted to know if anyone has done this kind of body work.

Stopped by a local auto body shop near me who knows me and has done work for my family in the past.
He said it would cost about $650. Said is was a 3 day job, has to remove the bumper and blend/match the paint which is a 3 part process. I thought the amount was very fair.
Reactions: Taxvictim
•••
O

$650 would be an awesome price from what I’ve seen on this site and others. Just hope that the paint, blending etc. will be a good job.
Reactions: calidreamz808
•••
J

NYC parking scares me. I went to visit my brother and the way they jam park valet cars together in underground lots makes me glad we were driving his dented 140k mile 15 yr old RAV4 instead of my car.
Reactions: Shelburne
•••
W

Looks like this will end OK, parking garage co called me and told me to go ahead with the repair, they are sending a form to me to sign, a check in a few days will follow.
Reactions: JohnnyMa and jjrandorin
•••

Upvote 0
I
A potential 50/50 at-fault accident, except I have sentry mode footage. What Should I do? CA

Western Road Trip in a Model 3