Seems like it was quite the event. Electric dudes dancing, the unveiling of the car, followed by a rock band. Any normal video available?
•••

doug said:
Seems like it was quite the event. Electric dudes dancing, the unveiling of the car, followed by a rock band. Any normal video available?
Click to expand...

I'm guessing Tesla / Link will release something as they had about half a dozen photographers, videographers, and even a video camera on a large boom.

It was really well organized. And, I'd like to say thanks to Tesla for inviting me up as a part of the opening toast, to represent the owners in Hong Kong.

I did get a few minutes with the chairman of the Link (who own/operate 800+ Properties in Hong Kong), and got to push the agenda of local EV drivers - not too hard as he is a Model S reservation holder himself, wondering where to charge.

Tesla are going to be at Stanley until the end of December, and will be offering test drives there (using a red P85 coming in any day from Japan). But, no news of pricing yet, although the first signature deliveries are looking pretty firm for April 2014.
•••

OK, when I arrived, just after I got my admission bracelet, I was pinned to a wall and pictures were taken by four photogs at the same time, as if I was a movie star going to the opening of my own movie! Just as I tried to proceed, I was asked to go back, they weren't all done yet! 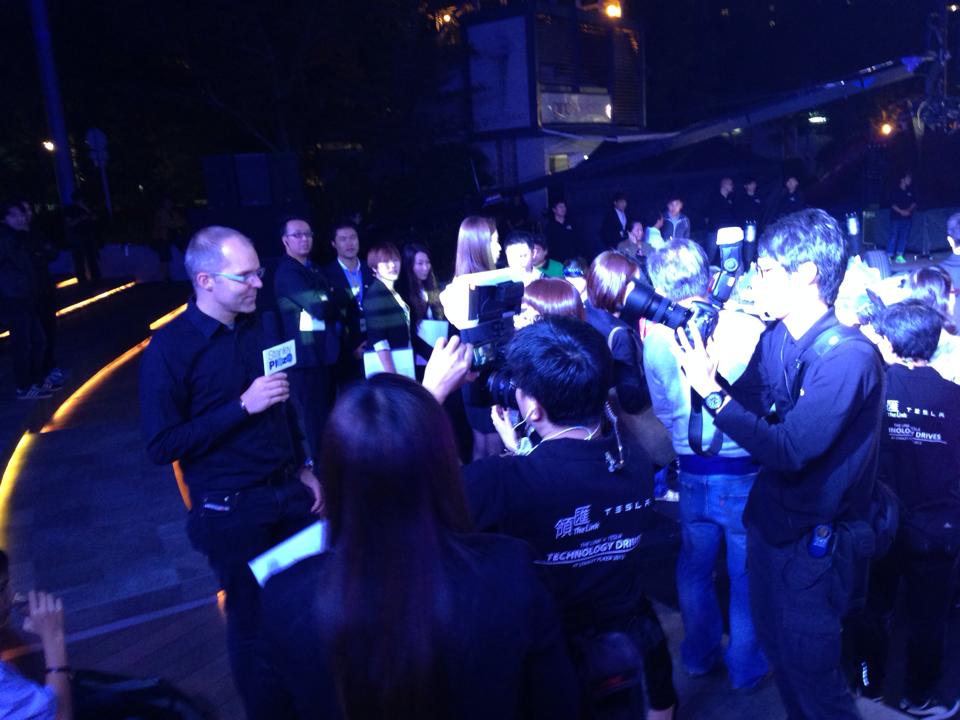 I'm not sure what this was for, why I was interviewed (I'm just a regular "reservationist", not even Signature)

I think it's safe to say there will be video and photos, they are probably busy editing and sorting at the moment.